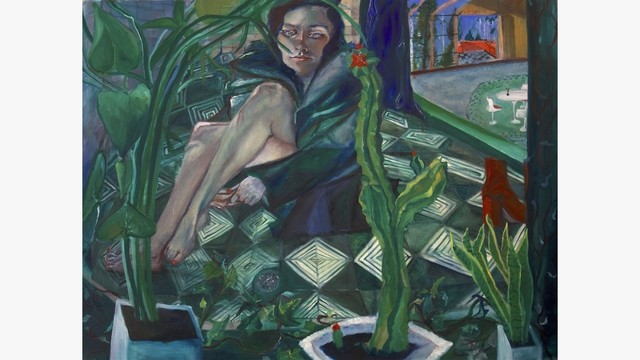 $530 raised 35% of $1.5k goal
18 contributors
3 Years running
Contribute
By Sequoia Scavullo
Are you friends?
Personal campaign Keep it all
Baltimore, US

I've never made a fundraising campaign before but I am very excited about my ideas for a film I want to make this summer. Whatever you can contribute, small or big will be an enormous help. I can't tell you how much it would mean to me for your support of my artwork. I've attached a trailer to my first 16mm project so you can get an idea of how I think. I've grown a lot since then but I still have a soft spot for it :). Also, above is a recent painting, my paintings greatly influence my films, in terms of compositions, color and considering each frame with care.

Planning for this film is all I've been thinking about this year. It's been an exciting process when I wake up in the morning and a new idea comes to me. My story is about motherhood. The backstory to my protagonist is that she was a lucrative businesswoman and when she had a son, her competitors kidnapped and killed him. The film starts with the stages of mourning, she explores her feminine side in solitude after years of channelling the masculine side.

This story is similar to my paintings in content. I paint scenes that exist in specific phases of emotion and time; for example, the feeling one has while waiting for something intense to happen, which is extremely energetic yet extremely static. Or the feeling right after that climax has occurred (after words). The “after” is the emotional trace of what has happened and the “before” is a state of constant combustion. These states are common and banal, often irritating once we realize we are trapped inside them. When looking back on our memories we gravitate towards the climax. However, a re-examination of the times of waiting and afterwards is much more fruitful than simply focusing on the climactic moment. Inside the mundane are secret pockets of time that evoke a mix of mystery, comfort and new preciousness.

Mourning is very much so concerned with dealing with the afterwards. My film will concentrate on the small victories of this time. You might ask, once you have taken out the climax in the narrative, what is left? The plot is dependent on duration. I create paintings and films that, through a set of intuitive rules, build a parallel space to reality. I intend for this space to exist beyond the boundaries of a frame, to give just enough information to suggest what is not included in its viewing.

Your money will help me with costumes, reserving locations to film in, building small constructions that will be a part of the film, paying my actors and providing food for them, renting a car, and so on. Sequoia Scavullo hasn't posted any updates yet.
Newest | Oldest
Show more
NEW Thank you emails can now be sent directly from the Transactions page.
Alternatively you can still leave a comment here.

Sequoia Scavullo is managing the funds for this campaign. The campaign is for a personal cause.