Thank you everybody. Our campaign is now over. ✕
A Cry For Help
✖
Gallery (6) 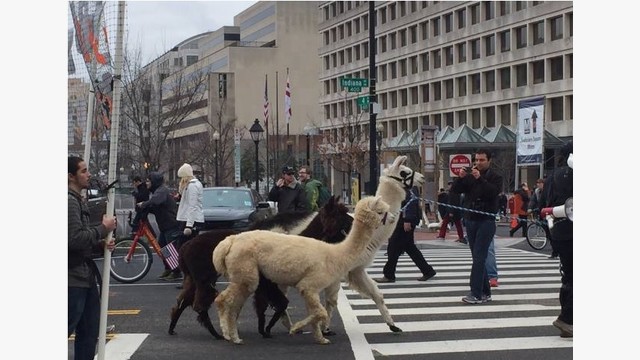 Ethan Abbott a long-time activist, brings his animals with him to rallies and events. His animals Shay D. Alpaca, Thaddeus D Llama, and Tragically Cute D Alpaca even accompanied Ethan to Philadelphia for the DNC. Some of you may have even met them there. Ethan has a long history of actions such as these. He believes that the animals are a peaceful way to protest and that those whom we protest against will find the animals appealing enough to stop and listen. These animals have a way of bringing people together in the fights for social justice that so often divide us. Ethan has been known to take his Alpaca even on the subways, into the offices of Senators and to street rallies to make his voice heard through the love of animals.
It is this love that we hope to reciprocate to our friend. Life is hard. Sometimes we all struggle to find firm ground to stand on and other times we just simply need a leg up. Everyone can relate to feeling overwhelmed. It is easier sometimes to just want to give up than to wade through a sea of emotional despair. It's these times that we need each other and a sense of community more than ever.
Nearly one week ago, Ethan reached his breaking point and posted a series of live videos on Facebook. These posts led to multiple calls being made to his local police department asking for a welfare check on our friend. Afraid that he might be punished, Ethan was forced to hide out in a field for 3 days in freezing weather while police searched for him. With his long history of activism, Ethan was rightfully wary of what the police might try to associate him with if he were to be caught. In an effort to help. The lawyer for Freeanons reached out to Ethan's local police asking them to back off and to allow Ethan to return home to seek counseling.
Unfortunately, this wasn’t an option and so, sadly, Ethan remained away from his home and away from the help that he so desperately needed.
3 days ago, Ethan returned home and what he returned to was nothing less than shocking. The animals that we've all come to love so dearly had also been in desperate need of attention. The roommate who was supposed to be caring for the animals in Ethan's absence had done nothing at all.
There was feces everywhere and the house was torn apart by dogs that only wanted to be fed and let outside to do their business.
Shortly after Ethan arrived home, he discovered an individual had entered the house without his permission and taken photographs of the home. They then sent those photos to the landlord and to animal control. He was then advised he had only one day to clean up the mess. By this time, Ethan had been sleeping in his van for about 4 days and was totally overwhelmed by what he had witnessed. He requested assistance from his inept roommate who refused any assistance to Ethan and again, Ethan was wracled with fear. Given his rural location, we were unable to assist Ethan in cleaning up the house to make it presentable for his landlord but somehow he managed to work his way through that on his own.
In the meantime, Ethan has until Friday to get the animals licensed so that he can continue his activism which involves the animals. Also, due to the events leading up to today, Ethan finds himself in dire need financially. He requires enough funds to feed and trailer the Alpacas and Lamas and to repair his damaged vehicle to travel with the animals. We need Ethan to be able to get back out there and do what he does best. We're asking you to assist us in helping Ethan get the leg up that we all sometimes need.

A fundraiser has been set up and we ask you each to join us in helping this great activist continue his work and relieve some of the burden that got him to this dark place to begin with. We are fundraising to collect $2,400.00 to get the animals licensed and to the point where they are able to legally travel. We have great plans for Ethan but we need your help to get there.


Thank You for Caring about saving family farmers - Hope you have a great day!
Activity highlights See all16
Show more
Subscribe to receive updates by email.

A Cry For Help Community

Ethan Abbotts is managing the funds for this campaign. The campaign is for a personal cause.