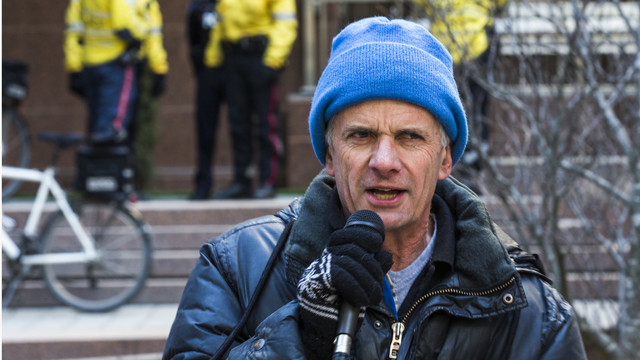 John Clarke has dedicated his life to fighting for poor people.

Along with some others, he founded the Ontario Coalition Against Poverty in 1990, and has been organizing a vibrant poor people's movement in this city ever since.

John has been a leader in OCAP’s struggles for affordable housing, against evictions, for increases to social assistance, against deportations, and against harassment of the homeless. He has given his all for the struggle for a better world and has done so as part of the most grassroots of organizations. OCAP has never received any money from the government or large foundations. As a result, organizers like John earn very little. Only recently did his “salary” increase to $15 per hour, in line with the Fight for $15.

There has been no money for a pension or for benefits. He has had little opportunity to save for retirement. This is where we come in.

In May 2019, John will turn 65 and, in January, he will step down as a paid organizer with OCAP. As someone who has fought long and hard for other people’s dignity, John deserves a secure and dignified next stage in life, which we, as a social justice community and a city, need to ensure.

Without a pension, this will be difficult. So, we need to create the funds for John’s grassroots pension.

We need to send a message that says, if you dedicate your life to the struggle, you won’t be abandoned. As a movement we need to say, yes, we do take care of our people. We can ensure that he has enough for himself and his partner Emily to live on.

Let's work to mobilize our networks, friends, and others who have been impacted by the organizing work of John and the Ontario Coalition Against Poverty!

Craig Fortier is managing the funds for this campaign. The campaign is for a personal cause.