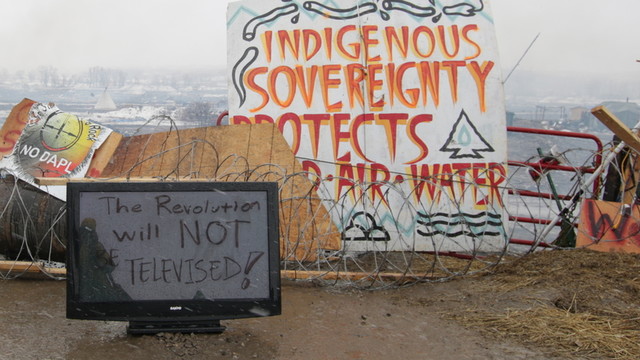 $3,311 raised 33% of $10k goal
59 contributors
4 Years running
Contribute
By Myron Dewey
Are you friends?
Personal campaign Keep it all Bismarck, ND, US

On October 8, 2016 I was documenting Dakota Access Pipeline working within the 20 mile buffer zone from the Missouri River, when I noticed several vehicles approaching fast from a 5 mile radius. As we got pulled over, I noticed all of the a total of 17 officers had no badges or identification on their uniforms. A clear red-flag that I may not make it out of there safely and I was at the time in fear of my life. It was like a bad movie and I was the key character.

The live feed documents the officer stepping out of their role and violating my constitutional rights by steeling my drone out of my vehicle without a warrant. The officer stated he had a warrant which later a warrant was still not produced.

The fundrazr funds will be used to continue to document the human rights and constitutional violations against the Water Protectors exercising their first amendment, as well as my right to document and journalize.

Thank you for all your continued support, we still have lots of work to do together as this was the start of many more human & constitutional rights violations by Morton County, assisting agencies and hired Dakota Access Pipeline mercenaries called TigerSwan.

Many blessings relatives, Water is life...

Myron Dewey is managing the funds for this campaign. The campaign is for a personal cause.