Thank you everybody. Our campaign is now over. ✕
Shoal Lake 40: Road to Reconciliation
SubscribeUnsubscribe
✖
Gallery (6) 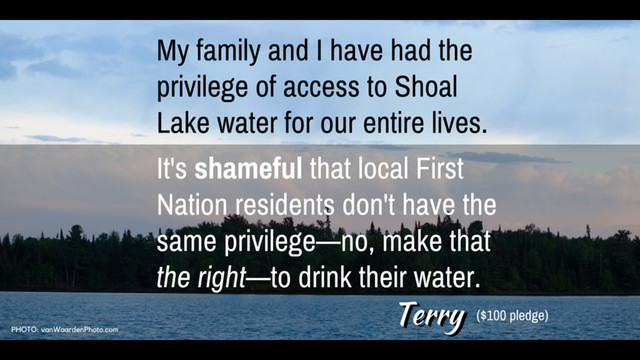 The goal here is to collectively raise the $10 million Ottawa refuses to invest in the all-weather access road essential to the survival and viability of the people of Shoal Lake 40 First Nation. It's a road that, if built, would help make it possible for them to finally enjoy what generations of Winnipeggers have had for a century—access to clean drinking water.

Winnipeggers past and present are asked to consider the true source of 'their' water, and the costs to those displaced by its diversion to a city roughly 140 kilometres away. For there is no way we in Winnipeg should get to readily drink, cook and bathe with that water while the people of Shoal Lake cannot, a sad and unjust state of affairs the Free Press recently described as "an indictment of [our] indifference."

That is why what the federal government won't do—unlike other levels of government, who, to their credit, say they will contribute to the road's construction—it seems we as individuals must collectively step forward and do ourselves. Think of it as an opportunity to perform a true act of reconciliation, one with the potential to give life to the recent recommendations of the Truth and Reconciliation Commission. An act that would help honour a debt one hundred years in the making.

How do I pledge?

Like most crowdfunding sites, FundRazr accepts credit cards or bank cards as ways to pledge on-line. When you pledge, the money is simply "held" until the campaign either meets its goal or misses its goal.

However, unlike most crowdfunding sites, FundRazr also allows campaigns to accept "offline" pledges. So if you are someone who is unable or unwilling to contribute on-line, you can now pledge via cash or cheque. And remember: just like pledges made using credit/bank cards, your cash or cheque pledges will ONLY be collected if and when we meet our goal. For details on how this works in practice, please consult the specific instructions for making cash or cheque pledges below.

Our ability to receive and handle your cash- or cheque-based pledges is due to the supportive actions of two community organizations, the Stop Violence Against Aboriginal Women Action Group (or SVAAWAG) and West Broadway Community Ministry.

2. Write in the dollar amount you wish to pledge, then check the box marked 'CASH.'

5. Using your smartphone's camera or a scanner, create an image of the signed form.

6. Email the image to this address: honourthesource@gmail.com.

We will confirm receipt of your email soon after it arrives.

2. Write in the dollar amount you wish to pledge, then tick the box marked 'CHEQUE.'

6. Make the cheque payable to: SVAAWAG *

7. Mail (or deliver) the signed form and cheque to:

We will confirm receipt of your form and cheque soon after it arrives.

* SVAAWAG = Stop Violence Against Aboriginal Women Action Group, a community based effort which has kindly offered to act as a repository for pledges to this crowdfunder.

Where is my pledge going?

First of all, potential donors should know that this is an "all-or-nothing" campaign: that is, no money will change hands until the $10,000,000 goal is achieved. When you pledge, then, you're really just telling your credit card company to "hold" that money for the duration of the campaign. If and when the goal is met, the pledge you made becomes a payment and is then charged to your card; but if the goal is not met, you'll pay nothing.

That means, even if pledges were to hit as high as $9,999,900, unless that last $100 is pledged, no-one would see a single cent. Now, other campaigns are set up so that organizers can receive and withdraw pledgers' money almost as soon it is pledged. To me, I fear that would leave the integrity of this particular effort way too open to question and, frankly, I wouldn't want even a fraction of that money to be in my account for a millisecond. In case it's not yet clear, I neither want, nor will ever see, one thin dime from this campaign. If we hit the goal, it will be Shoal Lake 40 First Nation who benefits. (Note: FundRazr, the platform for this campaign, does administer a handling fee for collected pledges, as does WePay, the payment processor.)

And so, again, because this is an "all-or-nothing" campaign, no money will ever change hands *unless* and *until* ALL $10 MILLION has been promised by donors BEFORE the late August 28 deadline. Whatever the dollar amount people have pledged using their credit cards or debit cards, NONE of it will be withdrawn UNTIL the $10M goal is achieved. If the goal is not met, literally nothing will happen.

But what if we do meet the goal? Can we trust you with our money?

Obviously, it's critical to both donors and the intended beneficiaries that steps be taken to guarantee transparency and accountability if/when the goal is reached. To that end, it seems what would make most sense would be to engage a trusted third-party (a respected lawyer and/or charitable foundation, say) to receive and administer the transfer of funds for the road's construction. Shoal Lake 40 has indicated that it already has a formal, collaborative and transparent cost-sharing arrangement with both Manitoba and the City of Winnipeg that would provide the appropriate mechanisms for handling the funding we hope to generate here. This joint “Freedom Road Project Team” is already overseeing the administration of a detailed road design.

Who is behind this crowdfunder?

This campaign has been put together by Rick Harp, a born and bred Winnipegger, and proud member of the Peter Ballantyne Cree Nation.

"Like other long-time Winnipeggers I know, I'm disgusted, ashamed, even outraged by the fact that, while we get to take water for granted every day, Shoal Lake goes without," says Rick.

"Basically, no water means no Winnipeg," he adds. "Which means Winnipeg literally owes its existence to Shoal Lake 40. If we help get this access road funded, it would mean this community is one massive step closer towards their ultimate goal of a water treatment plant and, frankly, it’s the least we could do to support people who've given us so much."

What does Shoal Lake 40 First Nation think of all this?

From the get-go, it was understood that the only proper way to proceed with such a campaign was to have the upfront support of the community's leadership. Here's what they want to state for the record:

'Freedom Road' is our First Nation's goal of putting an end to the forced marginalization of our people. It's encouraging to know that you and others share our vision of realizing a more equitable and functional relationship with the rest of Canada. While we appreciate your intentions, at the same time we wonder what kind of country Canada is when safe access to essential services, when our right to clean drinking water, when access to basic economic opportunity, must depend on the kindness of strangers?

That said, if your efforts should miraculously succeed, donors can be assured that every dollar raised would be applied under the fully accountable joint project management arrangement already in place with the governments of Manitoba and Winnipeg. Under this arrangement, every dollar is matched 2 for 1 by the other two governments.

Thank you for your support,

Road to Water, Road to Justice for Shoal Lake 40 Community

Rick Harp is managing the funds for this campaign. The campaign is for a personal cause.