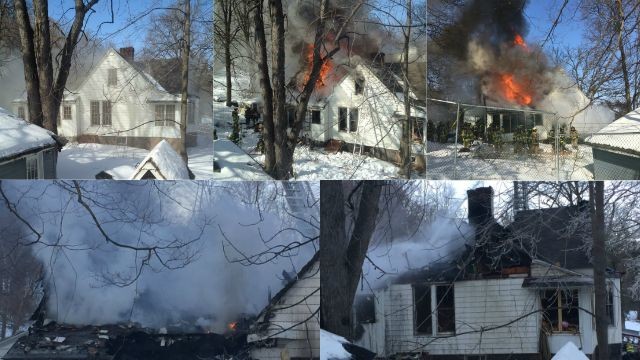 My long time neigbhor Fred Rosselot lost everything in a tragic house fire on 2/20/15. He is an elderly man who collected books and sold them to make ends meet.  Unfortunatly his home is now uninhabitable and most likely will have to be torn down. He was take to the hospitral for burns suffered while trying to save some of his belongings and only has the clothes on his back.

Please help me provide him with much needed funds to get back on his feet.

Below is the story from lohud.com...

UPPER GRANDVIEW – Firefighters battled a fire in a house that doubles as a book store off Route 9W, with billowing smoke visible from the Tappan Zee Bridge and road closures in the area Friday afternoon.

Route 9W is closed in both directions between Old Mountain Road and Broadway in Piermont. Orangetown police are warning drivers to avoid Route 9W south of Route 59 and north of the New Jersey state line.

The home was evacuated and firefighters fought the blaze from the outside, said Rockland Deputy Fire Coordinator John Kryger.

Officials said homeowner Fred Rosselot, 82, ran back into the building to retrieve belongings and suffered serious burns. He was taken by ambulance to Nyack Hospital.

Part of the roof collapsed and the rest of the home was heavily damaged.

The residence also houses Fred Rosselot Books, which is described as a used book shop open by appointment. It has 30,000 books, according to records.

Firefighters reported that books fueled the spread of the fire.

Jack Dunnigan, owner of Pickwick Books in Nyack, said he has known Rosselot for more than 40 years.

Rosselot is a retired geologist who collects and sells old books dealing with science and Western thought.

Firefighters initially had difficulty getting enough water from hydrants in the area. They had to enlist a pumper from Valley Cottage to get water from a Nyack Water Department hydrant near the New York State Thruway overpass at South Broadway.

That water was pumped into the United Water system and used to put out the fire.

A pumper was sent to Nyack from Tarrytown."

Barbara Valente is managing the funds for this campaign. The campaign is for a personal cause.