No thanks
Documentary: The Journey Back
SubscribeUnsubscribe
✖
Gallery (2) 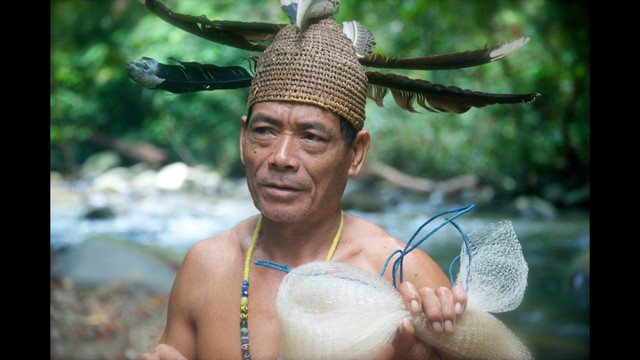 I'm David Metcalf, a photographer based in Ubud, Bali.

We need your support to help make  a multimedia documentary film carefully recording the stories and songs of the Dayak elders as we take them on a journey home to their ancestral lands  where the spirits dwell, deep in the heart of the forests of Borneo  and raise awareness about their culture and the Imperitive of saving the forests and wildlife of Asia's Amazon.

Deep in Kalimantan, near the Malaysian border, in a village called Setulang, about 800 people of the Kenyah Dayak tribe live on the edge of the pristine forest.

The Dayaks call the forest ‘Tala Olen’ meaning ‘Forbidden forest’. They have strict cultural rules about cutting down the trees in the forest or damaging it in any way. The Dayaks are spiritually connected to the forest, the rivers and the land.

As Kole Adjang, one of the elders, told us:

"We don't know exactly what will happen in the future. Will the next generation keep our agreement, or will they damage, open new land or log? Perhaps serve their self interest? We hope that by example, our great grandchildren will also take care of our land and Tana Olen [the Forbidden Forest]."

The multimedia documentary, blending film, still photography, music, paintings and voices, will be a way of preserving the Dayak's way of life for future generations, while drawing attention to the dangers facing the forest and wildlife of this beautiful Island.

The elders' journey will be captured in still photographs and video as well as through music by Robi Navicula, leader of one of Indonesia's most successful bands, and paintings by Wolfgang Widmoser, a famous artist based in Ubud, Bali.

An ecosystem under threat

When I was visiting Setulang with my expedition partner Rex Urwin, we became very attached to the Dayak people we met there. Their ancient way of life, this culture of preserving the forest, is under threat as it is in large parts of Kalimantan (Indonesian Borneo) with logging and dam projects destroying huge swathes of the environment – 52% of Kalimantan’s forest has already been lost.

Kalimantan is Asia’s Amazon, representing only 1% of the earth’s surface but 5% of its flora and fauna, including untold numbers of trees and plants still undiscovered by mankind. Among these unknown species could be plants with huge medicinal benefits – but they risk being destroyed before we even find them.

The Dayaks moved to their current village from deep inside the forest in 1969. The elders we met in Setulang 18 months go have a deep longing to return to their original village at a place called Long Saan, five days by canoe up the river.

But they can’t afford the cost of the journey. An idea was born: Rex and I have pledged to raise enough money to grant the elders their dream of visiting their ancestors’ burial grounds up the Kayan river, deep in the heart of the forest.

Once the documentary is made, we’ll be using it to raise awareness about the Dayak culture and the threats to Kalimantan’s unique environment by touring it around Australia, NZ, the USA and Canada. Accompanying us on the journey will be artists and activists from several cultures – Kevin Locke, a Native American dancer, will make the journey with us, as will James Greenshields an army veteran . We really want to connect the wisdom of the Dayak people with other cultures around the world who are facing similar threats to their way of life.

We need to raise funds to make a multimedia documentary about the Dayak’s threatened way of life in the forest, so much of which has already been lost.

We've managed to secure the support of Jason Houston, one of the USA’s foremost environmental filmmakers and photographers. He'll be accompanying the expedition and filming the Dayak's return.

We hope that by showcasing the beauty of the forest and the unique cultural beliefs of the Dayak, we’ll showcase the potential for eco-tourism in this area as an alternative to damaging logging and dam projects.

But we need your support to make it happen. Bringing people from all over the world, paying for the production of the documentary and mounting the expedition will come at a cost.

All pledges, however small, will make a difference to seeing this life-changing project become a reality before it's too late. Thank you for your support!

Dayak Dave is managing the funds for this campaign. The campaign is for a personal cause.