Thank you everybody. Our campaign is now over. ✕
Help The Austin Lawyer's Guild Defend Freedom
SubscribeUnsubscribe
✖
Gallery (1) 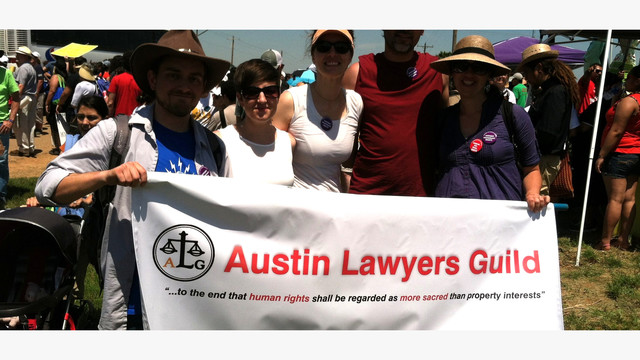 The Austin Lawyer's Guild is a network of lawyers, law students, and other volunteers who defend activists and others threatened by the judicial system.

Lawyers involved from the ALG have been defending my friends for arrests relating to protests and activism for years, but I only just needed their help for the first time. On March 4, 2017 I was assaulted by a Trump supporter while protesting against the POTUS 45 regime, but police put ME under arrest and charged me with assault instead of my assailant.

One year and a day later, my case finally came to trial -- and my charges were dropped! I can only credit the hard work put in by ALG lawyers Paul Quinzi and Millie Thompson, who, in so many ways, made it clear the state shouldn't bother proceeding with my case.

I know I'm far from the last person who will need their help in Austin, especially as the political tension in our nation continues to rise. This crowdfunding campaign is a small way for me to give back.

I'm setting the goal for this campaign to $500, which was the maximum fine I could have faced if I'd lost my case. Whether or not we meet that goal (or exceed it!), EVERY PENNY left after the crowdfunding fees will go to the Austin Lawyers' Guild.

I know we're all cash strapped these days, but please donate if you can, especially if you think you or someone close to you might need this kind of help someday.

Kit O'Connell is managing the funds for this campaign. The campaign is for a personal cause.