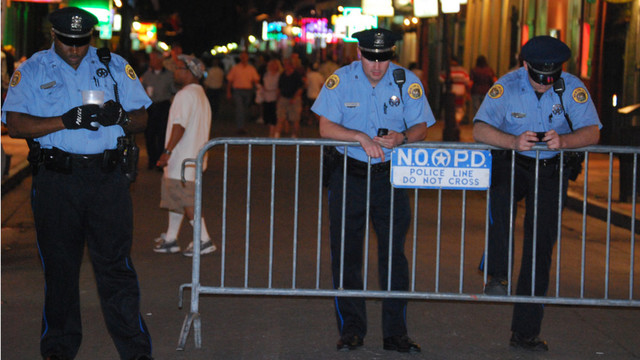 On January 20 2017, fifteen New Orleanians were arrested for protesting the newly elected President Trump and what he stands for. Most were charged with felonies.

Legal fees will be tremendous. We believe it is important to demonstrate solidarity with those arrested protesting Trump by ensuring all of them have access to the best legal counsel possible during the ordeal to come.

The egregiously outsized charges these arrestees now face aren't just designed to frighten other potential protestors-- they want you to be frightened of your own allies, to believe that the oppressive work NOPD does is somehow in your best interest.

There are concerted efforts to paint the arrestees as illegitimate or somehow deserving of the grotesque charges they've been slapped with-- efforts originating with the New Orleans police, carried forward by complicit branches of media and those who for whatever reason take the side of one of this country's most deeply and repeatedly discredited police departments.

It's important to note that among the charges against the arrestees are fourteen counts of MASKING. Let that sink in: criminal charges for wearing a mask during Carnival season.

Is that okay with you? Does it bother you that New Orleans police will now, as NOPD Chief Harrison threatened, arrest on sight and charge anyone wearing a mask, even in the French Quarter, even during Carnival, whether or not they're doing anything else perceived as untoward?

Of course this law, like all laws, will be selectively enforced... but if you think you're somehow safe from arbitrary arrest and outrageous, fabricated charges, because you're not "one of them," because you're "respectable," then you're operating from a place of great privilege and/or deluded about how our city's police operate.

The Trumped-up charges against these supposed protesters are unreasonable and punitive, meant to set a tone of fear and to discourage future protests.

As the Trump regime and its particular logic takes hold, you will see this more and more often: efforts to divide "legitimate" from "illegitimate" resistance. You may think you are safe... but none of us are.

We ask you to join us in supporting those arrested, as a strike against fear. If you can't give, please at least spread the word.

While making room for diversity of tactics and approaches, we must understand our historical position: we will stand together against tyranny, presenting a broad, united and multifaceted front, or we will be picked off and individually crushed, 12 by 12 or 1 by 1, each in terrifying isolation.

This is a crucial time. We need your material support.

Nola J. Twenny is managing the funds for this campaign. The campaign is for a personal cause.