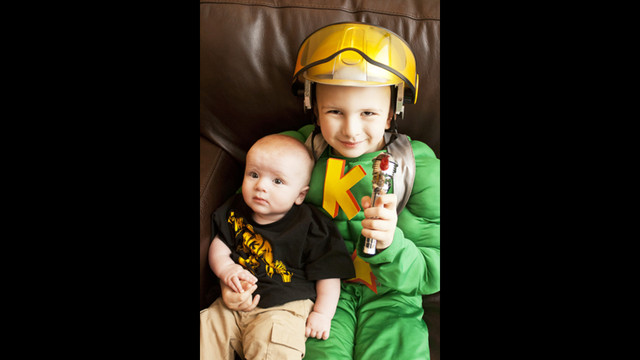 On July 10 2012, 5 year old Keian was diagnosed with T-cell Acute Lymphoblastic Leukemia. During the first month, Keian was responding well to treatment and by August, was in remission. He continued with active treatment, but on December 6 2012, it was discovered that he had relapsed. Due to finances, they were forced to give up their home and reside in a trailer onsite at the hospital, while Keian received additional treatment. The family was told that in order to give Keian the greatest chance at a cure, he would need to undergo cranial and total body radiation, as well as a bone marrow transplant. Both of these bring on a chance of life threatening complications, as well as acute and long term side effects. His best chance, was to receive a transplant from a matched sibling, but they were informed there would only be a 25% chance a sibling would be a perfect match. Just 5 weeks prior to Keian’s diagnosis in July, Keian’s baby brother, Joren was born and after testing, it was concluded that he was that perfect match. As time is critical, radiation and conditioning for the bone marrow transplant was set in motion, but in March 2013, just as Keian was only weeks from transplant, he was admitted again to the hospital with bacterial meningitis delaying transplant until the following month. On April 5 2013, before his first birthday, Joren gave his big brother the greatest gift of all…the gift of life. After donating his marrow to Keian, their healing journey began and they remained in hospital for another 2 months. Keian celebrated his 6th birthday isolated in a small room in order to protect his newly forming immune system. It appeared as though Keian was doing incredibly well and was on his way to a full recovery. On July 29th, Keian came in for routine blood work in anticipation for the following days surgery in order to remove his central line. It was then they were given the devastating news that his Leukemia had returned once again. They are currently residing in hospital and have began treatment in the hopes of achieving a 3rd remission.

His parents have set up a Facebook group in order to provide updates and support Keian and his family through this journey. You can join this, by following this link:
https://www.facebook.com/groups/106827016159117/.

Keian Blundell is managing the funds for this campaign. The campaign is for a personal cause.