Thank you everybody. Our campaign is now over. ✕
Logging Accident:Could use your help
✖
Gallery (1) 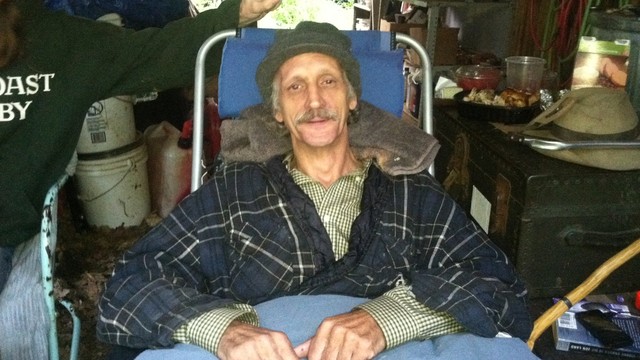 On the 23rd, I turned off my saw, flipped up my ear protection and heard my friend and partner, Ken Wright, calling weakly for help from a hundred yards away. The tone of his voice told me something was very wrong.

When I got to Ken, he was on the ground conscious and talking but obviously in severe pain and having trouble breathing. A hemlock tree he cut had caught an 8-inch diameter ash tree snapping it off 20' above and behind his head. The full weight of the upper 30 feet of the ash hit his hard hat slightly off center, tore his earmuff off, and landed on his shoulder driving him to the ground.

I made him as comfortable as I dared without moving him, called 911 and texted his girlfriend Suzy. She should at least know he was coherent and talking to me before she heard the emergency crews headed down the dead end road where we were working.

Within 15 minutes, none longer than 20 minutes of my call, ten to twelve people from four different rescue and fire departments reached us. While paramedics got him on a backboard, stabilized his neck and started an IV for fluids and pain meds, I chainsawed them a path to the ambulance 250 yards away. I cannot say enough about how fabulous those first responders were.

Ken went first to the Keene NH hospital. My friend Ralph from Gilsum rescue had stayed behind to help me pick up Kens gear and before we had even gotten out of the woods we heard over his radio that Ken was being airlifted to our regional trauma center at Dartmouth-Hitchcock. Of course, our hearts sank at that news but were glad he would be thoroughly checked over by the trauma team at Dartmouth.

I am happy to report that numerous X-rays, MRI's, and CAT Scans later he was released from the hospital with no broken bones or ruptured organs but also with no clear prognosis. As with many of us in this day and age, Ken has no health insurance. Neither does he have workman’s comp as he is an independent contractor.

Everyone I have spoken with has said that the hospitals will negotiate the bills and set up a payment plan. However, I am not just concerned about these bills. It is unclear how long it will take Ken to be back in shape to work. Although he has no broken bones, it is not clear what soft tissue damage he has sustained and what the long-term effects might be. So he needs to pay hospital bills, have a financial cushion while he is not able to work and a cushion for future healthcare needs pertaining to this accident.

And just a little bit about Ken for those of you who don't know him. He is as sweet, modest, hardworking, and unpretentious a guy as you would ever want to meet. He is  always willing to lend a hand and would not think twice about giving the shirt off his back to someone in need. I have no hesitation in asking for help on his behalf. Your money will not be squandered.

See all activity81
NEW Thank you emails can now be sent directly from the Transactions page.
Alternatively you can still leave a comment here. Chip Chapman is managing the funds for this campaign. The campaign is for a personal cause.