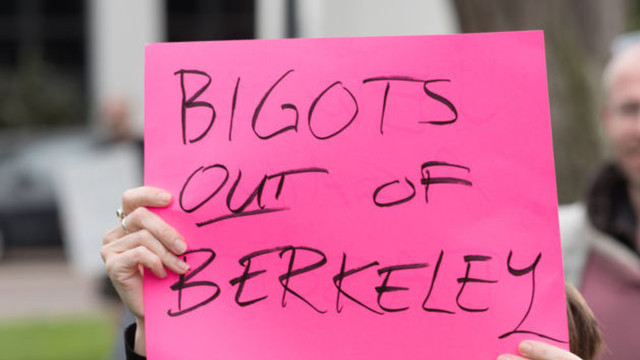 As has now been seen and sensationalized through most media outlets –

On March 4th 2017 in Berkeley ,California- racist, far right and alt-right Trump supporters staged a rally specifically in retaliation to recent Anti-Trump, pro immigration, human rights and anti racist protests. The location of this “March on Berkeley”, The Peace Wall at Martin Luther King JR Plaza in itself was strategic and aggressive to the people of this community.

With signs reading “ I grab pussies” and “build a wall”- The Trump supporters quickly made their intentions made as they gathered in the park clad in body armor and armed with shields, bats, 2x4’s, grizzly bear mace, knives and bricks.

Almost immediately they began to attack counter protesters, who stood in solidarity against Trump, dangerous racists and neo fascists expressing their right to make clear that racism and white supremacy is not welcome in the bay area or in any of our cities.

First with pepper spray and then quickly escalating to the use of other weapons they were clearly targeting women, people of color and other marginalized groups.

In the process of trying to defend community members from this violent onslaught seven people were snatched by the Berkeley Police and held without being notified of charges, without being mirandized, denied access to phones and basic hygiene such as soap and toothpaste and left untreated for severe cs gas ,pepper spray and blunt force injuries

While no charges have been officially filed at this point, they have not dropped them either . These charges range from Felony assault to midemeanor battery, rioting, obstruction and providing false identification. The city instead has decided to indefinitley hold the charges , having the ability to file at any time.

All funds raised will go directly to repay excessive bail costs, assist with lost wages due to incarciration, assist with legal and medical fees as needed and to advocacy groups assisting us in this unjust struggle

dustin sawtelle is managing the funds for this campaign. The campaign is for a personal cause.