No thanks
Layla's Equipment Funding
✖
Gallery (3) 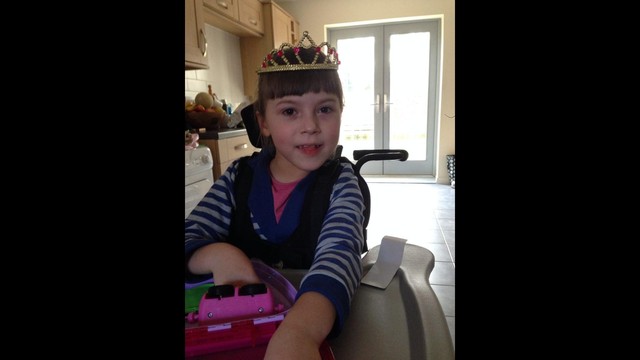 On the Friday 5th September I will be doing a tandem skydive, here's why:

Layla Ryan was born on the 7th February 2007 a healthy baby girl. At 5 months old after a series of siezure-type episodes Layla was admitted to hospital for a series of tests the results of which showed she had brain damage. The following 12 months saw a phenomenal amount of scans and tests to find the cause. Finally, at 18 months old Layla was diagnosed with Aicardi Goutierres Syndrome (AGS) a rare and genetic disorder. This has caused severe global development delays meaning Layla, now 7 years old, still wears nappies, cannot sit or walk, has limited speech and struggles with fine motor control. despite the problems and difficulties Layla has faced she continues to be such a happy, positive and resilient young lady. She attends a mainstream primary school and is a popular member of her class and has made herself known and loved across the school. Due to Layla's abilities she still has to be carried up and down the stairs and in and out of her chair, bed, the bath etc, and at almost 4 stone this is beginning to prove difficult. Earlier this year, after 5 years of waiting the council finally awarded a grant to Layla for improvements to be made to her main home. This was given so that the downstairs could be transformed to provide living space for Layla but the grant simply does not cover all the equipment that she will need to have installed.

Activity highlights See all69
NEW Thank you emails can now be sent directly from the Transactions page.
Alternatively you can still leave a comment here. Ben Ryan hasn't posted any updates yet.
Newest | Oldest
Show more
NEW Thank you emails can now be sent directly from the Transactions page.
Alternatively you can still leave a comment here.

Ben Ryan is managing the funds for this campaign. The campaign is for a personal cause.