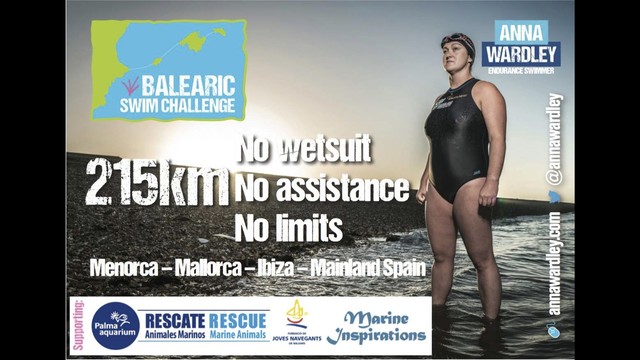 What is Anna going to do?

In May 2016 I'm going to swim 37km from Menorca to Mallorca to raise funds for three great charities as the first leg of the unprecedented Balearic Swim Challenge. I'll be doing the swim solo and non-stop and it will take around 20 hours for me to swim between the two Balearic Islands.

Why would anyone want to swim for 20 hours?

That's a very good question that I get asked a lot! I've got a track record for completing gruelling endurance swims to raise money for good causes and I'm hoping to raise lots of money through these tough swims. There's a fine line between pushing the boundaries and madness, and I'd like to think that i'm just on the right side of it (most of the time!). This swim is part of my Balearic Swim Challenge and I'm doing it to raise important funds for three great causes.

Which charities is Anna raising funds for?

Click on the links below to find out more about the three great marine-related not for profit organisations I have chosen to raise funds for:

How will the funds raised be divided?

The monies will be split equally between the three charities with each of the three recieving 25 percent. In the absence of a sponsor, the remaining 25 percent will be used to cover the costs of undertaking this challenge safely.

Why should I make a donation?

I'm going to be doing the uncomfortable bit by getting wet and cold, but you can play a significant part in this challenge by making a donation to my charities. After all that is why I'm undertaking this massive feat. Every contribution counts - don't worry if it's small as we can use the power of the crowd. It's that kind of giving that has helped me to raise over £70,000 over the last nine years since I took up endurance swimming. After my 60-mile swim around the Isle of Wight in 2013 I was invited to the Queens' Garden Party at Buckingham Palace and, although I felt extremely honoured to be there, I wanted each and every single person who made a donation to be there with me.

Will my support make a difference?

Yes! The funds will be used wisely by the three charities but on a personal level your support is a huge motivator when I'm swimming. I might be in the water on my own but it's a huge team effort and your support keeps me going when the going gets tough. Please make a donation to my charities - together we can make a real difference. Let's make it count!

Anna Wardley is managing the funds for this campaign. The campaign is for a personal cause.