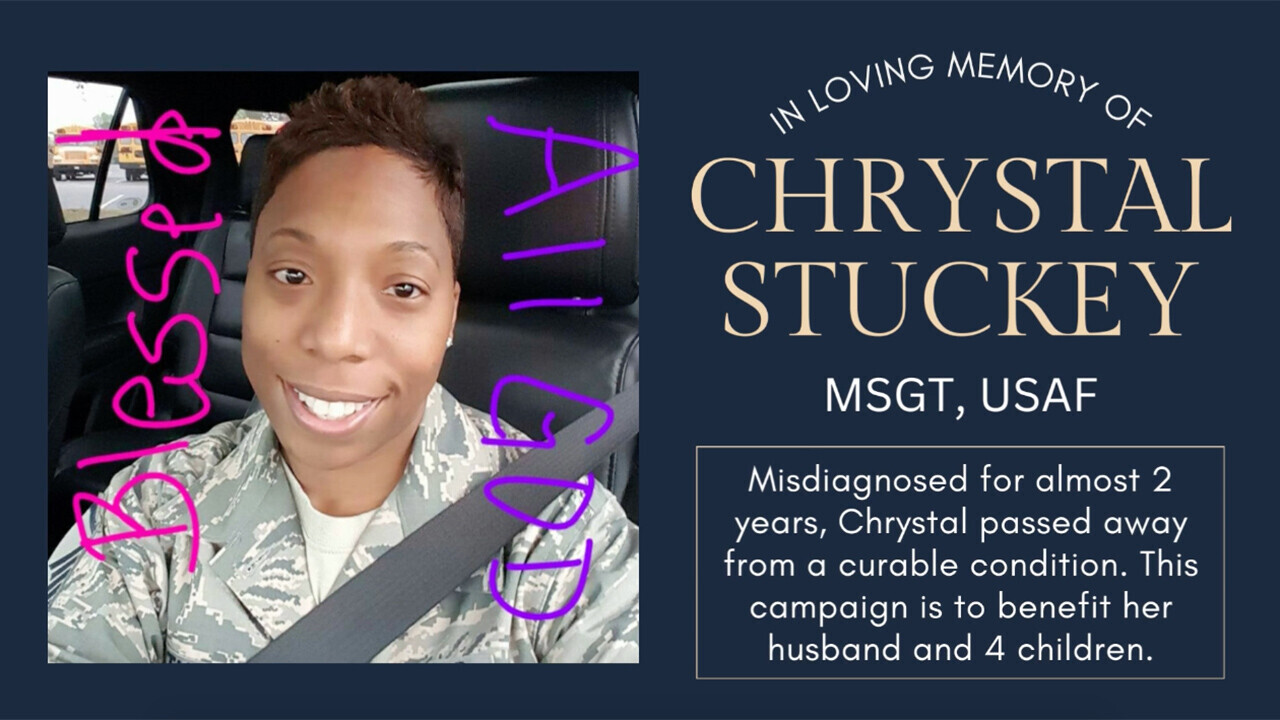 When Chrystal Stuckey got a terrible headache on Christmas Day in 2015, she went to the doctor.

A Master Sergeant in the 96th Force Support Squadron, stationed at Eglin Air Force Base, Florida, she took her health very seriously for the sake of her four children.

But the doctors on base were no help, and her headaches steadily got worse. They suggested she adjust her diet, but it made no difference. They diagnosed her with offset vertigo and she began to take medication — to no avail.

After a year of increasing pain, she was finally given a referral to a hospital that was hours away in Birmingham, Alabama.

She went to Birmingham and found that her doctors had sent the wrong paperwork. She couldn’t be seen.

Stuckey was eventually diagnosed with hydrocephalus, but treatment was slow in coming. Her husband, Deverris, who was also in the Air Force, was stationed in Korea at the time, and every phone call was heartbreaking.

Stuckey died while her mother frantically drove her back toward Birmingham with her two oldest children in the backseat.

They made it as far as a small town in Alabama called Georgiana.

“She was asleep,” Deverris said, “and when she woke up she said it felt like somebody was stabbing her in the head.”

Stuckey took off her wedding ring, handed it to her mother, and told her mother she knew she was dying. Then she lost consciousness.

She was brain-dead before a helicopter could transport her to the hospital in Birmingham. Doctors there told her husband that if she had been there 45 minutes earlier, she could have been saved.

Now Deverris is raising 4 kids as a single Dad, working, and trying to pay ever-increasing expenses to support his family. This extreme stress makes the grieving process even more difficult.

Your help can literally help save this family from financial ruin and emotional distress.

Deverris Stuckey says his oldest two children are deeply scarred by their mother’s death. “My son, I think his mind hasn’t wrapped around the fact that she isn’t here anymore,” he said. “Four years later, he’s still wearing the same clothes that she purchased for him, even though they are way too small.”

Money will never reverse the tragedy his family has experienced.

“We served our country honorably and faithfully,” he said. “We believed in the system. We believed they were going to fix her.”

With the help of Attorney Natalie Khawam, the Stuckey family has filed claims of medical malpractice with the Department of Defense under the provision of the 2020 National Defense Authorization Act known as the Richard Stayskal Military Medical Accountability Act.

But  mounting bills have to be paid every day and just the expenses of going back to school are overwhelming with 4 children.

When 11/11 heard of this story we decided to help.

Please help give back to these kids who have already given our country so much through both parents being deployed, and to a Veteran who still loves his country regardless of his unimaginable grief and stress.

Everyone who donates $5 or more will have their name signed by pro race car driver Colin Garrett to an Honor Banner which will be presented to the Stuckey family.

Every time they look at the banner they'll be reminded of your love & support.

More than anything, you'll get the satisfaction of knowing that you've helped a family who is in genuine distress. 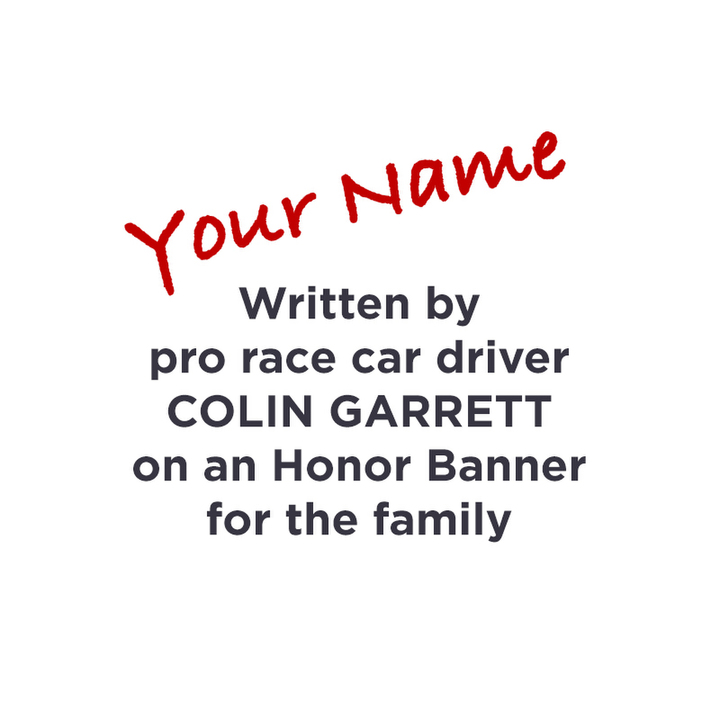 Pro race car driver Colin Garrett, founder of 11/11 Veteran Project will hand write your name on an Honor Banner to be presented to the family. Every time they look at the banner they'll be reminded of your love & support! 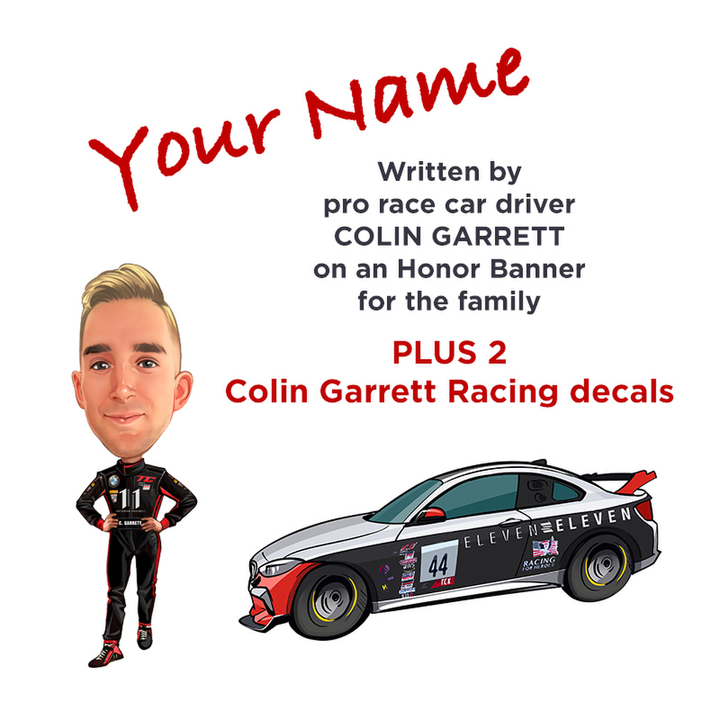 2 collectible Colin Garrett Racing decals AND Colin will sign your name to the Honor Banner for the family. Every time they look at the banner they'll be reminded of your love & support! 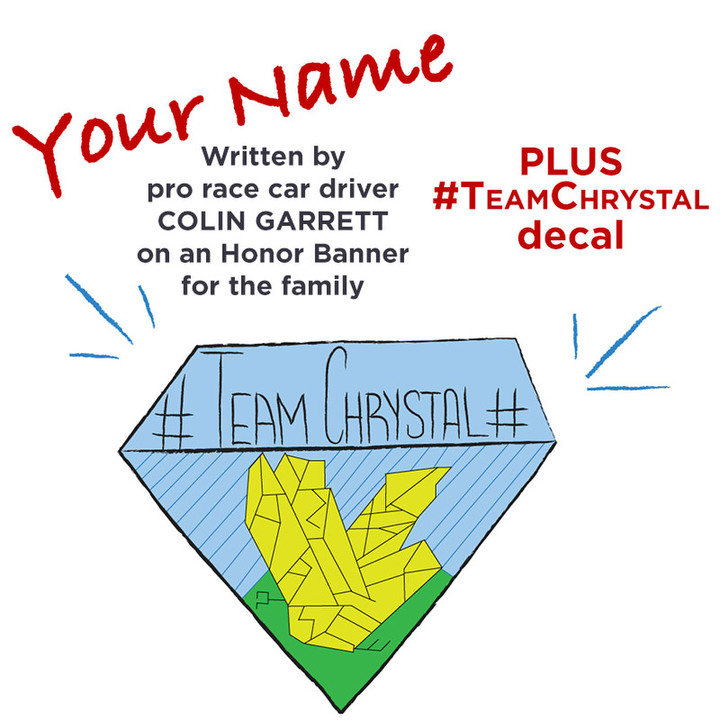 #TeamChrystal decal AND Colin will sign your name to the Honor Banner for the family. Every time they look at the banner they'll be reminded of your love & support! 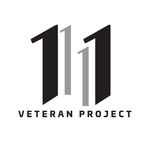