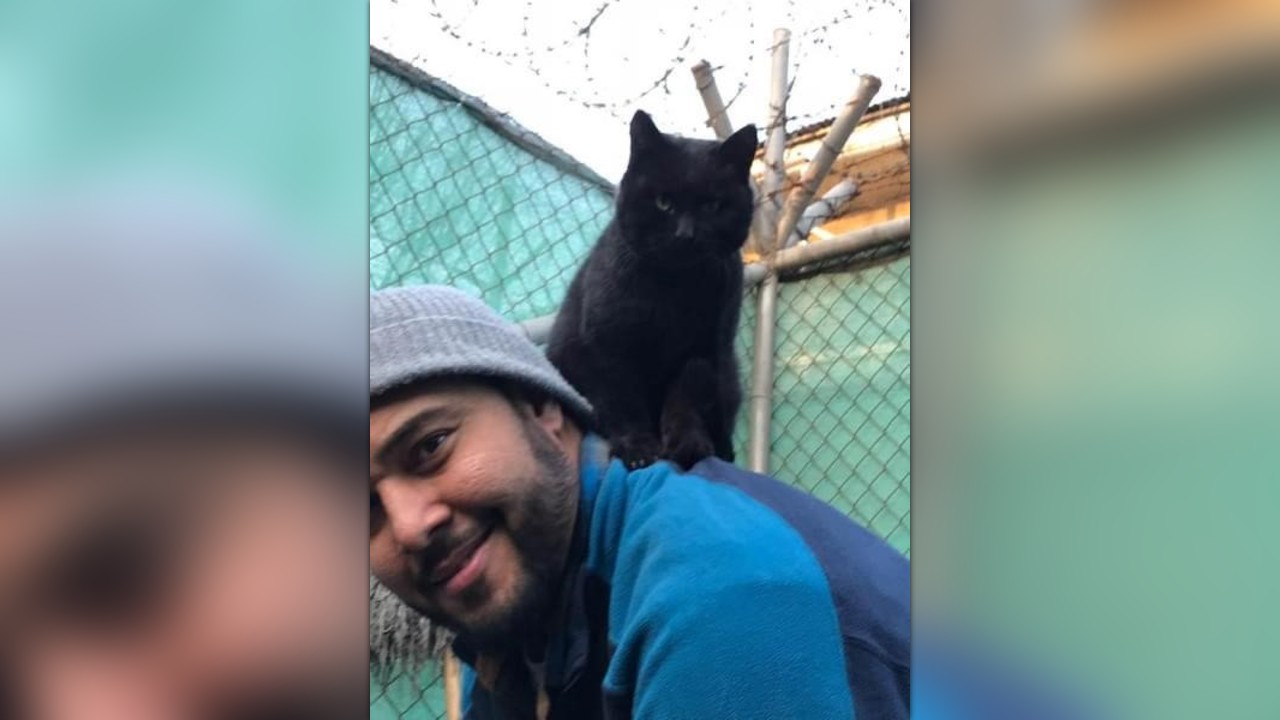 Alex is an orphan cat, he was found when he was a kitten living under a container at a U.S.base her ein Afghanistan.
He was the only one from the litter of kittens who managed to survive the harsh Afghan winter; his brothers and sisters probably did not make it. We felt compassion for him because he was the only kitten lone survivor, struggling at will to survive. Normally strayed cats are very skittish; Alex had no choice but to trust us to nourish him. He finally started to come around our work area and let us pet him. Over the period of time his affection finally grew on us, so between the U.S. Military and Civilian Contractors, we managed to raise him, until he was healthy enough, to walk around and defend himself from other rival cats.

Today Alex has become the most favorable cat on the base; his unique affection for people is very humorous, he would normally climb on your back as you try to feed him. He likes to perch on your shoulders to warm up his paws from the cold pavement. You would often find him walking around on camp “meowing” to see if he can score for his favorite prize meal, tuna. We want Alex to enjoy the rest of his cat life with us in the States living the American dream, as the U.S.-Military carries a long history traditional belief, “nobody gets left behind” and we want the same special treatment for Alex the Cat.

Pen Farthing; Nowzad founder adds; ‘Saving a dog or cat, a defenseless creature caught in the crossfire of a war that has dragged on for far too long, is a piece of positivity in what is generally a long and at times dangerous tour of duty in Afghanistan for soldiers and contractors alike.
The dog or cat takes just as much comfort from the relationship as the soldier or contractor does.
Being there for these animals and not walking away as many do, changes the lives of these animals for the better. The least we can do is support them on their travels to their forever home. We are all part of this amazing rescue’.

If you are unable to donate online, then checks can be mailed via our office;

If, for whatever reason, the companion animal rescue is not successful (such as disease or injury) then at the discretion of Nowzad, the funds collected via this Fundrazr page will be allocated to support the vital daily operational costs of the Nowzad small animal clinic and shelter in Kabul. We have over 140 dogs and 40 cats (which are mostly all adoptable) plus the first ever donkey sanctuary in Afghanistan. We continually need generous donations to be there for these animals.

The total required for a companion animal to travel to North America is on average $5500 for a dog and $3500 for a cat (THESE are airline costs only! We as a NFP make no profit and everything is subject to currency valuations and airline freight charges on the day of booking). We are sadly unable to offer refunds on donations.


To receive a tax-deductible receipt where applicable, or for any other queries, please contact:
pen@nowzad.com stating when and how you donated. He will be more than happy to support your request! J