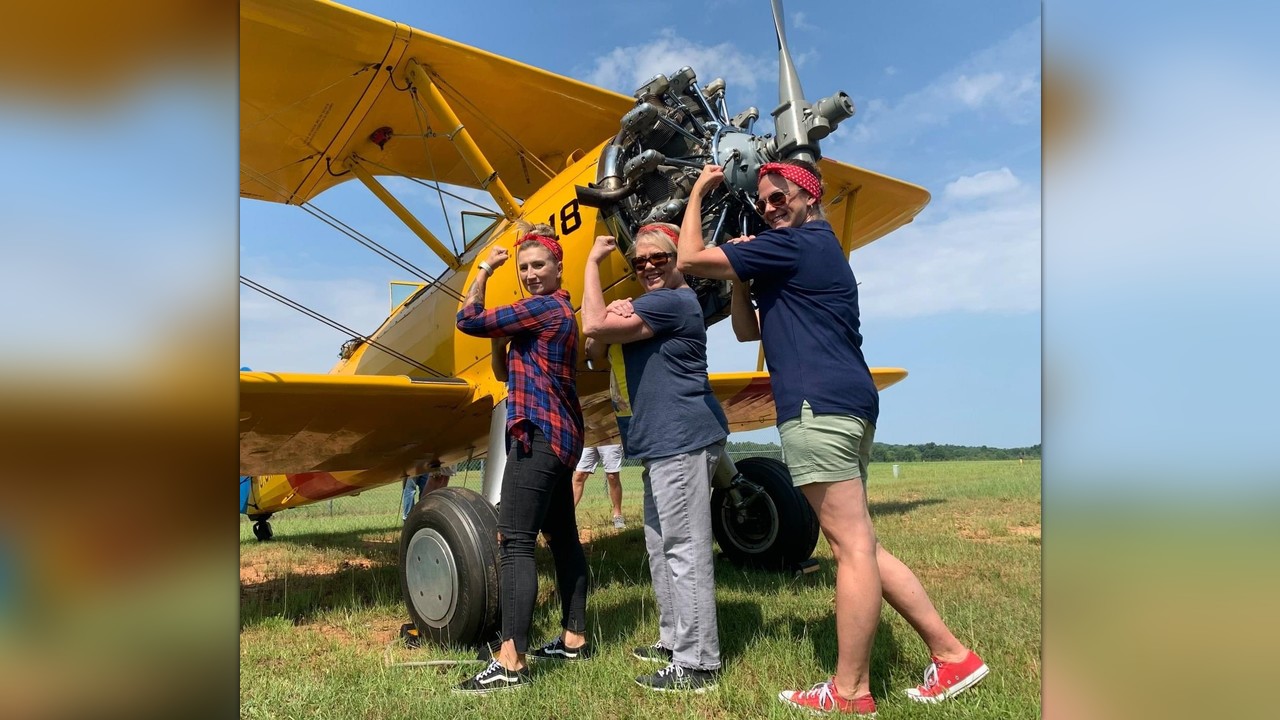 In 2019 Airbase Georgia acquired a World War II-era World War II-era Boeing N2S-2 "Kaydet" biplane trainer manufactured for the United States Navy in 1941.   The "Kaydet", built by the Stearman Aircraft Division of Boeing in Wichita, Kansas, was designated a PT-17 by the Army and more often called “Stearman” by its pilots.  The aircraft was the primary trainer for Army and Navy pilots for more than a decade beginning in 1936. The project is dedicated to “Rosie the Riveter,” the cultural icon representing women who worked in factories and shipyards during World War II, helping transform America into the Arsenal of Democracy. The restoration project team includes female members committed to honoring “Rosie the Riveter.”  CAF Airbase Georgia volunteers will use funds raised during the 12 Planes of Christmas campaign to purchase an engine, a Hamilton Standard constant speed prop, and the necessary accessories required for the assembly.

Over 8,428 Stearman were manufactured for use by the United States to train military pilots. During 11 years of military service, more American military pilots learned to fly in the Stearman than any other similar airplane.  While the project is a challenging ground-up restoration, the CAF Airbase Georgia workshop and volunteers are well equipped to create a first-class restoration. The organization has previously restored a Douglas SBD Dauntless dive-bomber, Bell P-63 Kingcobra, and North American LT-6 Mosquito.  Volunteers will document the restoration journey and share updates as a way to tell the important story of Rosie the Riveter.

Over the last year CAF Airbase Georgia volunteers completed the process of cataloging available parts and identifying what is needed for the project.  The team acquired a 40-foot shipping container and built shelves to catalog and store the Stearman parts, and many of the parts from the project airframe have been disassembled, sandblasted, repaired as necessary, and primed in preparation for reassembly.  The landing gear that came with the original project was found to be non-serviceable, so a fully restored set of landing gear and a reconditioned fuselage was obtained from a reputable Stearman parts dealer in Texas.  Areas of corrosion on the rudder have been repaired, and work is underway to replace damaged wood around the fuel tank compartment in the top-wing center section.  Fabric covering on the rudder has been completed and covering on the horizontal stabilizer is underway.

In the near future, the team will install the flight controls, seats, instrument panels, plumbing, wiring, and fittings inside the fuselage.  Several of these components were missing from the project airframe, and the missing parts must be procured or re-created.  The wooden wings from the project airframe will also be inspected and repaired where needed.  The most financially demanding cost of the restoration will be a new engine and propeller. Unfortunately, it was discovered during inspection the original engine core is not usable. The team is planning to purchase a new/overhauled engine and propeller for the aircraft and ultimately paint the aircraft as a Navy trainer.

For several members, the Stearman Restoration Project is their first hands-on experience restoring a World War II aircraft. All the volunteers now share a connection with the thousands of female factory workers that went to work building America's Arsenal of Democracy in the 1940's.

Educate and inspire middle school and high school students, especially young girls, to pursue careers in aviation and encourage more women to become involved in the Commemorative Air Force. CAF Airbase Georgia’s Education Program will introduce students to the story of Rosie the Riveter and America's military aviation history through its collection of aircraft, artifacts, and lesson plans that meet Georgia classroom standards.