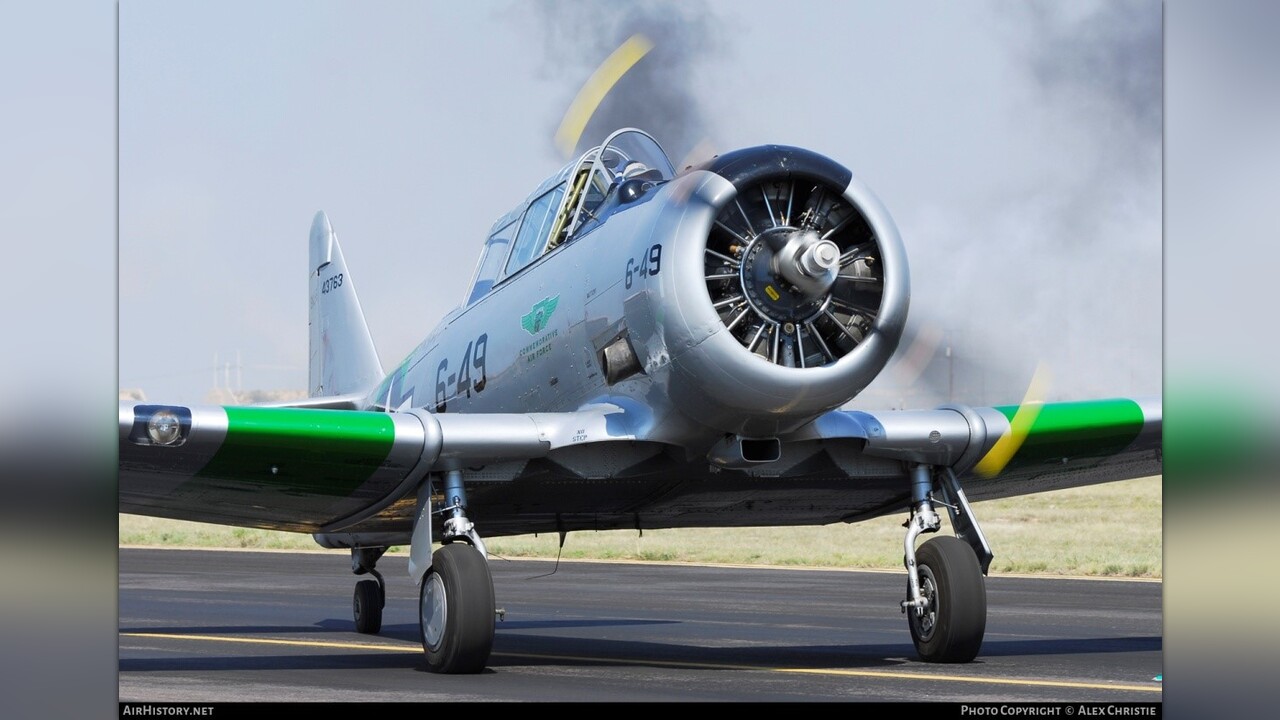 The Gulf Coast Wing SNJ served as an instrument trainer at Pensacola Naval Air Station for the duration of WWII. Her green trim reveals her assignment as a Marine Corps aircraft. But her roots are in Texas, having been manufactured in Dallas in 1943. Nick-named the "pilot maker" during the War, the AT-6 Texan/SNJ was the final rung of the training ladder for combat fighter pilots. After months of work in trainers with less power and lower performance, those who cut the mustard were moved on to the T-6 Texan Advanced Trainer (or SNJ Advanced Trainer if you were a Navy pilot) - the final hurdle before moving into combat aircraft. The men who qualified in the SNJ moved on to assignments in aircraft such as Corsairs, Avengers, and Helldivers.

The kelly green trim on her bright aluminum fuselage stands out on the Gulf Coast Wing’s 1943 North American Navy SNJ Advanced Trainer. This appealing and popular aircraft arrived back in Texas, the state of her birth, back in the summer of 2020. Since then, she has taken up the next stage of her CAF career with the Gulf Coast Wing and the Living History Flight Experience program. Early last spring, we installed a freshly overhauled engine and relaunched the SNJ on tour with us in July. The new engine and accessories amounted to over $55,000 in expenses, some of which were contributed by our supporters in a previous 12 Planes of Christmas campaign.

The new engine is performing beautifully, and our SNJ has taken dozens of passengers into the air since July. But one last task remains: her radios are reaching the end of their useful life and we would like to replace them with a new suite of modern avionics. This equipment includes two new radios with an intercom for communications and some navigational equipment. Raising $10,000 will help us fund the full avionics suite.

The Gulf Coast Wing tours routinely from April to November each year to airshows, barnstorming events, civic events, and flyovers, carrying the history of WWII military aviation to the public. We engage with ROTC units, scout troops, Civil Air Patrol, schools, and even universities. Our SNJ is wonderfully popular with the public and with the help of our supporters can continue her career bringing history to life, one amazing flight at a time.