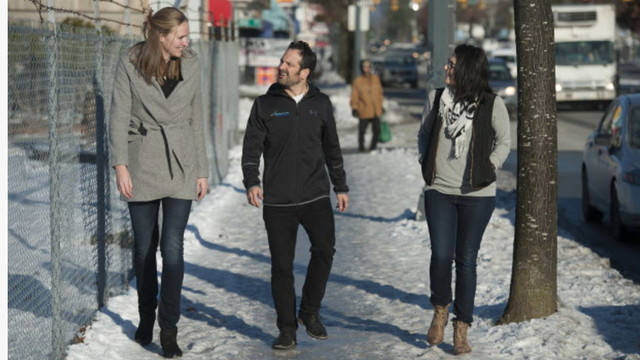 In Surrey's highways and byways they are known as the Wrap Around Team - 15 school liaison staff and their RCMP associates who help juveniles rated at extreme risk for homelessness, addiction, gang affiliation or sexual exploitation. The ultimate risk is death. But Jon Ross, a school district social worker, likes to contemplate the successes, which far outweigh the disasters.

"Our philosophy in helping is that we are equal partners with parents. We can't pretend to be an expert on a particular young person. We have to honour the history and not judgmentally."

The history for this story begins three years ago with a 14-year-old boy on the road to perdition.

His mother was interviewed by The Vancouver Sun but because of the serious nature of the criminal charges he would face as a minor, she cannot be identified. This is her story: "My son was hanging out with all the wrong kids and smoking pot. He had impulse control issues and wasn't coping," she said.

He ran away from home and came under the influence of an older male who supplied him with drugs and was involved in a series of armed robberies where replica firearms were used as well as bear mace.

"He was 16 and in jail awaiting a bail hearing when I called Jon. I was panicking," she said.

Her son was released and went into care as he was too scared to return home.

"We had a meeting with Jon and John Wilson, the RCMP officer (embedded in the team) and the probation officer and drew up a plan for services he'd need going forward. "We were looking for drug counselling and for his schooling to continue because he'd ruined his reputation at school. At the time, we didn't know what the Wrap program was."

When the team met the boy, they found he wanted to learn the guitar, so they arranged for lessons.

"They were there making sure he didn't miss his court appearances or other appointments, driving him, checking with him every day because he has difficulty self-managing and he has 22 bail conditions.

"He needed detox and rehab because he was using crystal meth, and Jon was involved in all that. He went to Peak House (for drug rehab) but was kicked out and put into a group home in Burnaby. Basically, all services were cut off because the Wrap program couldn't reach him there.

"But Jon still kept in touch. My son got involved with some kids he didn't get along with and got stabbed four times. Nothing life threatening, thankfully for us, and I brought him home." That was two months ago. "Jon was able to put all the services back, get him back with a clinician (for his addiction and mental health issues), get him counselling, got him back into schooling, got him back with a social worker.

"He's only at home now because of Jon's help. He's been a victim and a criminal all in one, and it's hard to sort that out as a parent, but Jon's provided me with counselling."

So how is her son doing? "He's a lot better. He's managed to get himself out of those circles, and he's got a job he loves. Jon and John Wilson are probably the only people he trusts.

"When he doesn't meet his bail conditions, they just don't stop working with him.

"They say, 'What can we do to meet the conditions,' again and again and again. They help him over and over and I've never seen them quit. No matter how many times he's quit on himself - they never quit.

"Without the help of Jon Ross and his team, l would have lost my son. "He probably would be dead." The Wrap Around Team has applied to The Vancouver Sun's Adopt-A-School program for $10,000 as an emergency fund to help families on their caseload, many of whom are impoverished.

OUR 2016 CAMPAIGN IS CLOSED.  PLEASE SEE OUR MAIN PAGE (https://fundrazr.com/profiles/vancouver-sun-childrens-fund) FOR OUR CURRENT CAMPAIGN.

This province has children who arrive at school each morning hungry, improperly clothed or without adequate footwear.

Not just dozens or hundreds. Thousands.

All they can hope for is the compassion of teachers to help them endure these miseries. To their great credit it is not unusual to find teachers and principals attempting to feed and clothe these children out of their own pockets.

There was a time the education system could do more for children stricken by poverty but budget constraints have dried up most of that funding.

It was for this reason the Vancouver Sun began its Adopt-A-School (AAS) campaign five years ago when it became apparent that some teachers in Vancouver’s inner city schools were buckling under the stress and needed assistance.

So we asked our readers to help.

The help that materialized from individual and corporate donors was astonishing. It is not possible to put an accurate dollar amount on what readers have contributed because in some cases the help goes directly to schools. All we can say is that almost $3 million has been received here every penny of which is designated for schools across the province.

So here we are another year, another appeal for help.

But what else can we do? Hunger is incessant. You are only separated from it by thetime since your last meal. And for the poor that gap is often unmanageable.

In this campaign there will be accounts from teachers who say they see children arriving at school who have not been fed that morning, have no food to last the day and who will be returning home with no prospect of finding anything to eat there either. It is a description of starvation. How can we ignore it?

You will be told of children feeding other children at school splitting their lunches so their classmates won’t be left hungry. This is not something that children should be left to deal with.

Canada has a wonderful international reputation for coming to the assistance of countries devastated by natural disasters or conflict and our United Nations commitment is without peer. But we are the only developed nation that does not have a national food program to feed its hungry school children. Regardless of party perhaps our politicians can explain why it’s necessary for children to be feeding other children. This newspaper asked as much in an editorial earlier this year. No one, it seems, is in a hurry to answer.

Thanks to the generosity of our readers no school that has asked for help to feed children has been refused. Often they have received more than they sought. AAS has set up fully funded breakfast programs, has provided money for clothing, shoes and boots, lice kits, transit tickets, field trips, emergency food vouchers to help struggling families over weekends, helped young mothers attending school with their babies. We have equipped school kitchens with stoves and fridges, dishwashers, cutlery, and washing machines, equipped sensory rooms, rebuilt an abandoned greenhouse so it could grow vegetables for low income families, provided computers and other technical aids to special needs children.

In short done all we could to alleviate the awful effects that poverty inflicts on our children attending school.

This year is no different. Please help.