Thank you everybody. Our campaign is now over. ✕
Save MrBronx
✖
Gallery (1) 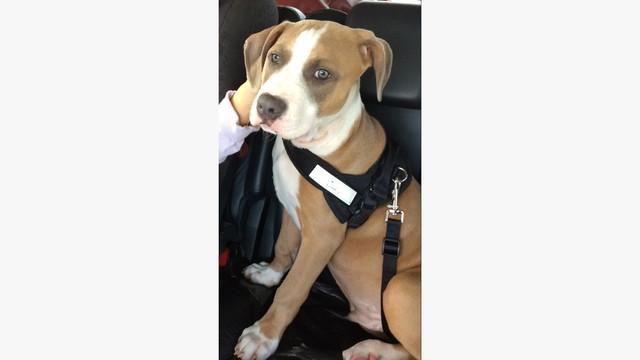 £1,675 raised
85 contributors
0 days left
Ended May 3, 2016
By Save MrBronx
Are you friends?
Personal campaign Keep it all
Saint Helier, JE

Save MrBronx hasn't added a story.

Please help us raise funds for legal fees to save our Staffy x Bulldog puppy We brought our new puppy to Jersey via Condor aged 7 1/2 weeks old in September. In November, we went to France for a weekend with MrBronx but on our return, our nightmare begun. We had followed all the rules to take him away. He had been registered at the New Era Vets, where he had all his vacinations and had been microchipped to receive his Pet passport, but on crossing back through Customs & Excise we were stopped by an officer. A Pitbull ‘type’ is what they call him.

Although they let us take him home they later served a seizure notice and after Christmas, we had to hand him over to the animal shelter until he would be assessed to ascertain whether he was a pitbull. MrBronx still lives there. MrBronx is now 8 moths old and we are allowed to visit him once a week for an hour where we can spend time with him in a confined area. We went to the Citizens Advice Bureau, sought legal advice, spoke to other dog professionals such as Rosie Barclay and even took it upon ourselves to bring over an independent qualified assessor which was discussed with Customs who were happy with her credentials.

It cost us a lot of money but we wanted to end this nightmare as soon as possible. To our relief he was not deemed and found to be a pitbull. As you can imagine we were over the moon and extremely happy. Since then Customs & Excise decided to bring their own assessor who is a retired Police Officer who was not an independent assessor and not even close to being as qualified as Kendal Shepard the assessor we brought over. Their assessor has deemed him a pitbull type and now we are going to have to go to court. Unfortunately it seems that we will be going through the court process to fight for Mr Bronx.

We have received so much advice from all of you and we have decided to action and set up this fundraiser so that we can get a good lawyer onboard to bring him home but also make a difference as no doubt there will be other dogs whose measurements fit the 'type'. We are asking you all for help so that MrBronx can come home and so that no one else's dog should have to go through what we are experiencing. We have set a fundraising page to raise funds for legal costs and to bring over our assessor Kendal Shepherd, we hate asking but these really are unfortunately beyond our means.

With success we believe all costs will be recoverable and all funds raised will then be donated to an animal charity to help others. This is not about making money, we just want our boy home. Thank you all again for your amazing support. X

Our full story can be seen on a page which we set up to make people aware.

See all activity86
NEW Thank you emails can now be sent directly from the Transactions page.
Alternatively you can still leave a comment here.

Save MrBronx is managing the funds for this campaign. The campaign is for a personal cause.