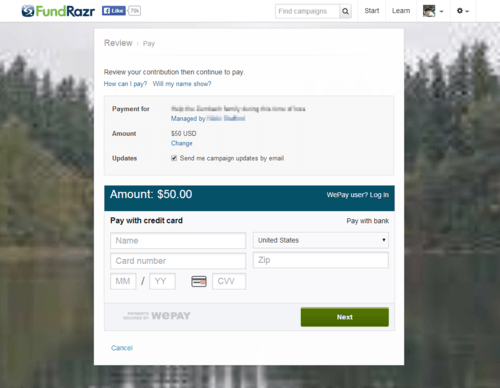 FundRazr was founded in 2010, and since then has raised over $50M in funds for over 40,000 campaigns worldwide. With most campaign donations being small, payment processing remains an integral part of the business model. In late 2013, FundRazr partnered with WePay, a mobile payment company, to improve the ease of making contributions to campaigns on the portal. The partnership with WePay drastically simplified the payment process on mobile devices, resulting in a 73% increase in successful mobile payments since the partnership launch. More information on the partnership can be found on the WePay blog.

A member of the FundRazr management team even quotes, “Our relationship with the WePay team has been vital thus far and we will continue to rely on them for campaign payment processing going forward.” FundRazr has had a variety of success stories since its partnership with WePay, and as online donations are so important to campaign success, efficient payment management can help make a campaign reach its full potential.

Ride to Give is a non-profit children’s charity to raise awareness and donations for children battling difficult illnesses. With the help of WePay, Ride to Give has raise over $485k on the platform for 31 different children so far. A recent Ride to Give campaign that reached their goal was to raise money for Xavier, an amazing kid in need of assistance with medical bills from a reoccurring brain tumor. He was able to reach his goal within only nine days.

Another fantastic cause on FundRazr is Voice of Witness. They offer a non-profit book series to educate the public on human rights crises through stories from men and women who experience them. They want to empower those that have fallen victim, and raise awareness through campaigns. They hosted a campaign ending at the beginning of this year and raised over 200% of their goal, totaling over $20K.

Early this year the Princes Margaret Cancer Foundation led a campaign to provide robotic surgery to six patients in need. They even had donors willing to match every donation made to the campaign, allowing them to far surpass their goal of $20K. They used this campaign to rally around World Cancer Day and promote finding a cure to cancer within this lifetime.

A variety of different arts campaigns have had success on FundRazr. Notably, the movie “Our Father” hosted a campaign to fund film production of an already written heartbreaking story. With the help of being featured in the Crowdfunder Show, they were able to raise over $25K to get started filming and share their story.

Crowdfunding is a global phenomenon, and companies like FundRazr and WePay can help facilitate global giving. The Soul Source Foundation is one example of a cause that had a campaign to empower and educate women in Kenya. Their recent success was in raising over $10K and continuing to live their mission of bettering the lives of women in rural Kenya.

Animals have seen a lot of success on crowdfunding platforms. One example of continued success is the Social Tees Animal Rescue, who has already run 11 different campaigns. They are unique because they post flash campaigns to save a group of animals at once. Without quick donations from the community in their most recent campaign, 25 dogs would have been euthanized within a matter of days.

These success stories are amazing to share, and are enabled in part by payment processing partnerships. With an increase in successful mobile payments of over 70% after initiating a partnership with WePay, FundRazr can continue its good work raising money for important causes.

Fundraising campaigns rely on donations for support are only optimized when payments can be made seamlessly and quickly, and subsequently shared within networks for repeated donations. FundRazr couldn’t be more excited about our partnership with WePay, as they are a critical ally to help us achieve our business goals.