FundRazr Success: Rebuilding after a Fire

We know that we can help you raise more money and fast. But it is always nice to hear it directly from one of our customers. Read how Kristina Lemons helped her sister raise money to ease the burden of coping with the loss of her home.

“The Hall family are Steve and Wendy Hall, with their three sons, Joshua 14, Jonathan 13 and Jason 10.

The family spent several years as missionaries in Bolivia helping with an orphanage there. They returned in 2009 and Wendy went back to work as a Labor and Delivery nurse and Steve owns his own business.

On Thursday, March 7, 2013, Wendy’s oldest son Joshua got up early to study. That morning he woke up before the alarm, at 5:15 am. He heard a funny noise and noticed a glow out his window. He opened the curtain to see what was going on outside. He saw flames!

He immediately yelled FIRE loud enough to be heard by Wendy. She didn’t notice anything at first, so she got up casually to see if there was need to be concerned. She immediately realized the house really was on fire. 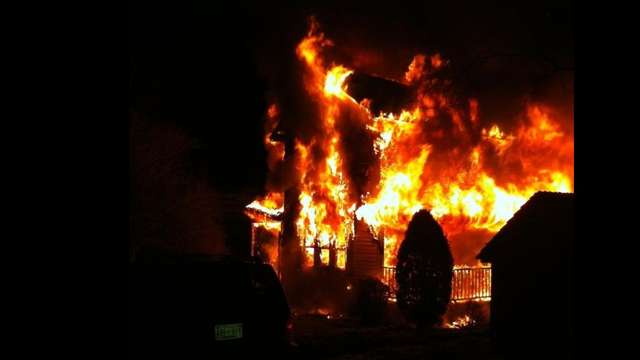 She and Joshua woke everyone else up and they ran outside as fast as they could. She said the black smoke was pouring in and her chest was hurting.

Within 5 minutes of hearing him yell fire, Wendy said they were all standing outside barefoot watching their house burn down (the picture was taken less than 10 minutes of knowing there was a fire at all.)

Luckily, no one was hurt and all the pets survived.

I texted Wendy as soon as I heard and asked her what she needed. She just said money. All of their ID’s, credit cards, cash, her purse, literally everything burned. They didn’t have a home to send clothes to or an address yet.
So I just thought I’d see if anyone knew a good fundraising site – one of my coworkers suggested FundRazr.

I chose FundRazr because the fees were reasonable and I could wire her the money as it came in without having to wait long time.
I set up the site and posted it to my Facebook page. I sent an email out to my office just letting them know what happened. Within an hour, there was already $1000 dollars!

I work for Cornerstone Research and I think I must work with some of the most giving people. They have never met my sister and so many people gave money. Several people shared the site on their pages and in just 11 days, the fund was completely raised.

My sister said it made her son realize that people really do care about them. He’s been so afraid since the fire. But seeing how many people gave and how fast we raised the money really brought some peace of mind to the kids!

The money itself means less to them, but the fact that people were willing and did it, means more than anything. To Steve and Wendy, the money itself meant that they could get their own place without having to rely on friends, not miss any work (which she didn’t), and be able to quickly get some normalcy back.

My fundraiser on your site exceeded all my expectations in such a short amount of time. I’m in awe. Thank you so much.”

Brice Royer had already been struggling with a stomach tumor and depression for several years when a doctor told him that feeling loved and cared for is the world’s best ...
Tiny Home, Big Hearts Runs FundRazr to Give Selfless Homeless Mother and Daughter a Home, and So Much More
Chilis on Wheels is an initiative based in New York City, spearheaded by veteran vegan and social rights activist Michelle Carrera. Michelle decided to cook her own vegan chilis and ...
Crowdfunding One Hot Meal At A Time
We are used to think that it’s not a good idea to give free money to homeless people without any guidance and control. They are likely to spend their money ...
Why We Should Give Free Money To The Homeless
Back to the blog