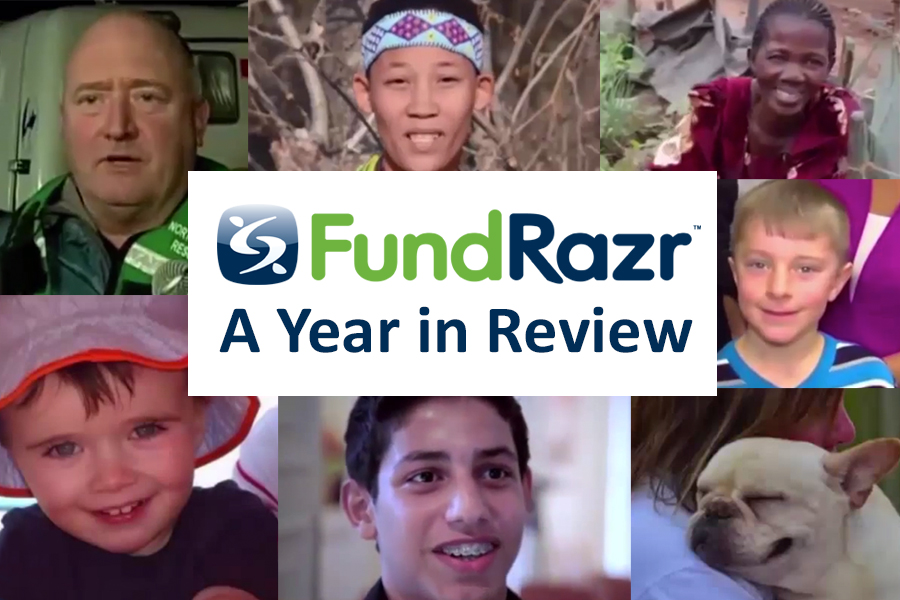 To celebrate the achievements of so many FundRazr campaigns in 2014, we created a video to highlight some of the incredible things accomplished through the power of crowdfunding. These projects and causes brought together large groups of supporters to turn dreams into reality and transform lives.

See our list below for more about the featured campaigns of 2014.

1. Zarese gave up her Christmas gifts so that families in Laos have one to remember. With FundRazr & Red Cross, she was able to raise $3200 to give families blankets, toys and hygiene products and help provide hand washing education during their visit.

2. Hurricane Odile had a devastating impact on One & Only Palmilla Resort near Cabo. Their guests came together to raise over $217K to aid the people who have welcomed them so warmly to their little paradise. Funds were distributed to staff to rebuild their homes and their lives.

3. Marley’s Mutts Dog Rescue teamed up with Wings of Rescue for a Holiday Mutt Airlift! They raised almost $16K to transport 150 small shelter dogs to NYC to find forever homes.

4. After the sudden death of North Shore Rescue leader Tim Jones, thousands of people came together to keep his legacy alive and continue to support the cause that meant so much to him.

5. Two year old Rhys was able to fly from the UK to the US to get the treatment he needed to survive a life-threatening brain tumor.

6. The Choir of London has been making music with Palestinian youth for the last decade. £17K can now be enable them to engage with more young Palestinian musicians, by welcoming them to their program in the UK.

7. One of the oldest tribes in the world raised £4K to produce indigenous media. They can now start to interact with the world on their own terms, fight oppression, tell their stories, and find a place for their ancient culture in the modern world.

8. WeMakeStuff Volume 2 will now go to print because almost 500 people pre ordered their copy of the groundbreaking book that highlights British Columbian artists and innovators.

9. When 3rd grader Cayden witnessed a child get denied a hot lunch because of no money on his lunch account. He knew he had to do something about it. He raised over $36K from over 1000 supporters to help pay for thousands of kids lunches, and start a nationwide movement!

10. In 2014 the playground at Mount Pleasant Elementary School was torn down. The Parent Advisory Council raised $118K to rebuild the playground to make it better and accessible to all children.

11. The team at ‘Awamu CIC’ raised £10K to help 60 families in the slums of Kampala build raised garden beds so they can learn how to grow healthy nutritious food for their kids.

12. Chicago French Bulldog Rescue wanted to save all the dogs at the puppy mill auction in October. With the help of over 700 people they were able to raise enough money to get all of them out and break the cycle of torture and neglect.

13. Aprons for Gloves Boxing Association raise $111K for its 3rd annual event to help provide community outreach through the sport of boxing.

14. A group of Harry Potter super fans were able to turn their dream into reality. They created a Harry Potter fan convention designed to be a more intimate, immersive fan experience.They exceeded their goal more than 300% and are finalizing their convention to be held in 2015!

15. With the generous support of over 260 family, friends and strangers Shiloh was able to raise over $43K for her 1 year old daughter Nola who has Sanfilippo Syndrome A.

16. This Christmas 10 year old Reese and his team were able to raise $69K in pyjamas, for kids who need them most.

17. John Tyson and his son Jordan had lost everything, including wife and son, due to the 2011 Toowoomba Floods. With the help of their friends and the Australian community they were able to raise $46K from over 380 supporters to get back on their feet.

18. Thousands of people got behind Baby Luca after an accident left him fighting for his life. His family was able to raise $89K on his road to recovery.

19. Asma and Malek walked 100km from London to Brighton in less than two days. They did this to allow 500 students in Tunisia go to school next year with all that they need.

20. Opportunity International raised almost $50K to provide access to financial solutions aimed at empowering people living in poverty to transform their lives, their children’s futures, and their communities.

You too have the power to make a change for good.
Click here to start raising money today!