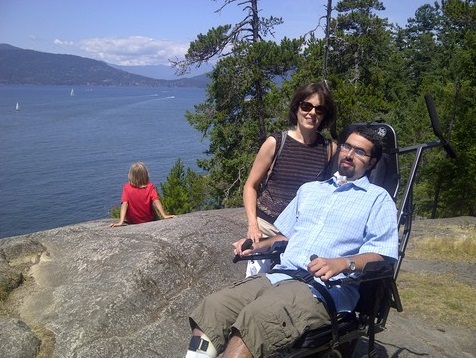 Bayan Azizi is a true survivor. At the age of nine he was diagnosed with a brain tumor and given just three months to live. Fifteen years later Bayan has beaten the odds and written a book in order to share his inspiring story with others. Upon hearing of FundRazr Bayan decided it was the best way to help cover the costs of self publishing his book. As a reward in exchange for a contribution, Bayan offered the option to pre order a copy of his book.

In just 60 days Bayan was able to exceed his goal and raise over $10,500! After exceeding his goal, Bayan announced that any surplus funds will be donated to the Oncology Department at the British Columbia Children’s Hospital for pediatric research.

Follow the steps to success in Bayan’s FundRazr journey:

“I was trying to find a way of raising funds to help cover the costs to publish my book and was thinking about starting a campaign on Kickstarter, but then found out about FundRazr through a close family member. I didn’t have to worry about getting approval for my campaign, I could just start it right away. The platform was very easy to use. I could view my campaign and send thank you notes to all of my supporters with just a click of a button.”

Bayan used compelling images to break up his story, and a family member offered to create an engaging video that would tell his story and make it easier to share. The 2 minute video featured a simple slideshow of images and used voice over to tell Bayans story. It even featured an excerpt from Bayans book, this was a great way to give people a taste of what is to come.

Once the campaign pitch was created using all the key features, Bayan began sharing it with family and friends by using their Facebook and email networks. This initial step in building social equity allowed his campaign to gain over 45 supporters in the first 2 weeks!

Like many campaigns, Bayan’s experienced a lull when it reached 65% of its goal. By then he had about 50 contributors and the campaign had been shared extensively on Facebook, Twitter and Google Plus by his community of support. To move passed this lull and reach his goal he used FundRazr’s Update Feature on a weekly basis to keep his supporters engaged. Bayan did this by thanking supporters, sharing progress on his book and asking them to keep sharing.

“Most of the individuals who donated to my campaign were close family and friends, but they must have shared my story with their friends, [because] I received donations from other individuals who may have been interested in my book.”

Bayan kept his supporters updated, and regularly asked them to follow and share his story. By doing this he was able to sell 65 copies of his book and build an online community of support around his project.

“Reaching and even exceeding my FundRazr goal has been a great experience. Not only for giving me more confidence to publish my book but most important it has made me realize how many people sincerely and truly wanted to be part of my journey. I am very honored and grateful to have witnessed the power of unity.”

Click Here to check out Bayan’s campaign or even pre-order a copy of his book.