Burning Man: Incredible Art Installations That Are a Reality Thanks to Crowdfunding

Every summer in the barren Nevada desert, tens of thousands of people come together to create a community driven by creativity, connection, and the free exchange of ideas. First held thirty-three years ago on a public beach near San Francisco, this event has become an internationally iconic symbol of the incredible things that are possible when people work together on a shared artistic vision. A temporary village where every pedestrian object is transformed into a work of art, the festival culminates in the dramatic burning of a huge wooden sculpture – the Burning Man – on its very last day.

Given the values that drive Burning Man – collaboration, cooperation, creativity, connection – crowdfunding is a natural choice to help realize the ambitious art projects that make the festival as special as it is.

Powered by FundRazr, Hatchfund offers nonprofit crowdfunding specifically for artists, craftspeople, and skilled builders who are trying to gather the financial resources needed to make their visions for the festival a reality.

Here’s some of the incredible art installations that will be a reality at this year’s festivals like Burning Man and thanks to crowdfunding: 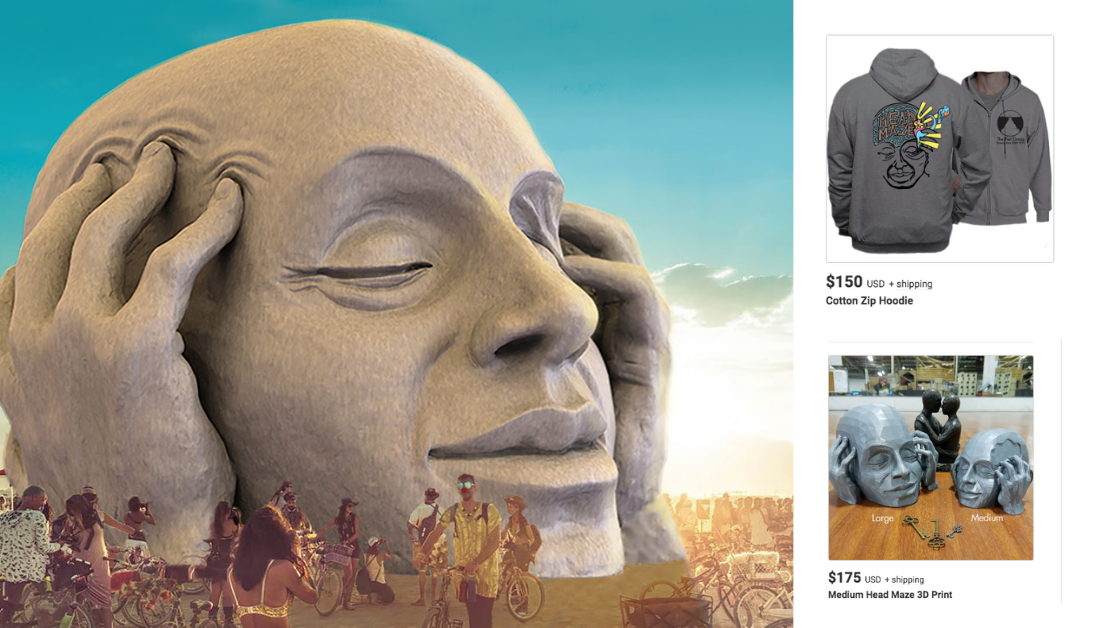 Head Maze is a 40 foot tall, interactive sculpture of a human mind engaged in meditation.

Head resting on one hand, the fingers pull away part of the sculptures face to reveal a sparkling, crystalline panel of stained glass. More than just a sculpture, the Head Maze is a building – festival-goers can enter the mind via s series of hidden doors in the mouth, wrists and head that will lead them into a 4 story, 18 room maze. This labyrinth references the human subconscious, prompting its visitors to contemplate the complexities of cognition, and our persistently fluctuating perception of self. 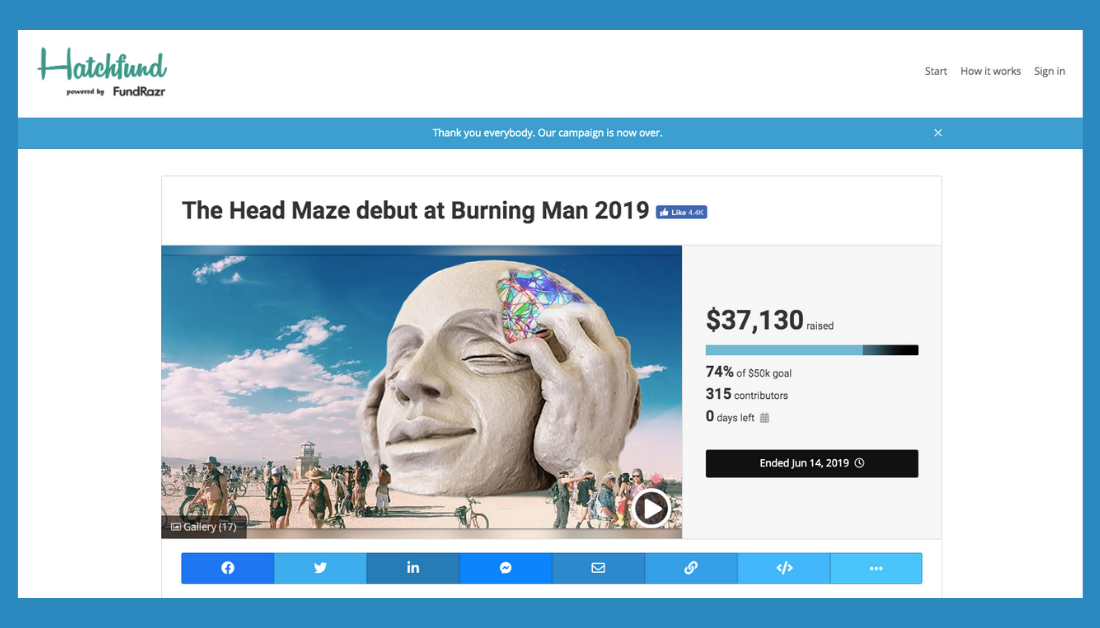 The Temple of Direction

The Temple of Direction is a space that serves the Burning Man community; a place to grieve, give thanks, let go, connect, and reflect.

Thousands upon thousands of people pass through the Temple, either alone or with their closest friends, and leave behind hand-scribbled messages, photographs, poems and deeply connected personal items. The Temple holds this honor for all to mourn, grieve, and even celebrate significant milestones in their lives. 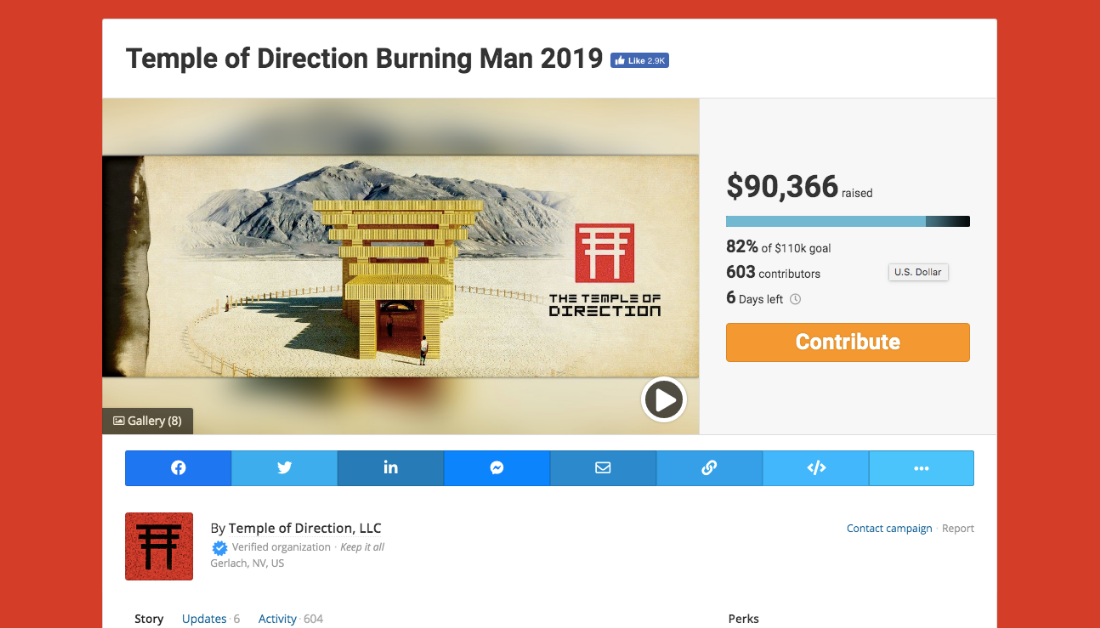 A long-running and beloved festival experience, the Temple of Direction is partially supported by a grant from Burning Man itself. For the rest of its needs, the Temple has had great success with crowdfunding, raising over 80% of their $110,000 goal.

The Purr Pods are three large, metal, feline-shaped sculptures, lounging in a cluster.

Each will take a different pose, and include cozy, built-in seating. The works will be illuminated from inside with color changing LEDs, some of which react to sound. During the day, the sculptures can provide shade as well as a restful place to sit. By night, the glowing eyes promise mischief and draw participants in to explore the curves of the cats and cuddle up in the bench seats. When petted, these kitties purr!

Cats purr at luscious, vibrating frequencies, between 25 and 150 Hertz – frequencies that are known to be therapeutic and calming. This installation will heal Black Rock City participants in the same way; through touch and sound. As the sculptures vibrate at these same frequencies, they’ll transform over-stimulated and stressed humans into blissed-out kitty cats.

With a budget of $8,000, artist Paige Tashner used HatchFund powered by FundRazr to secure 94% of the funds needed to complete this project. 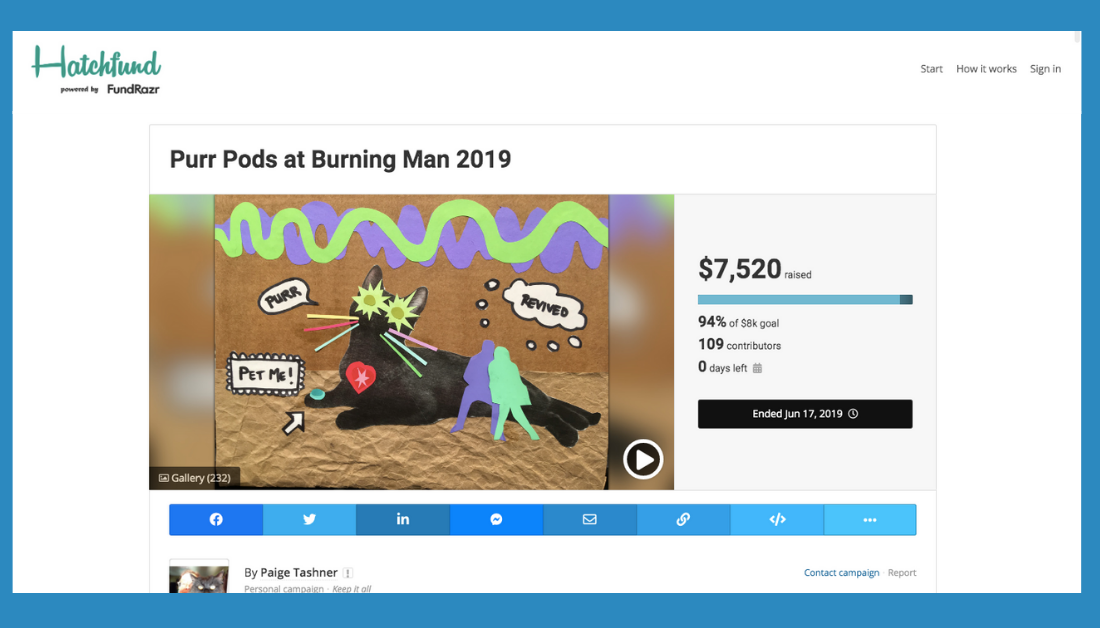 In architecture, a folly is a building constructed primarily for decoration, but of such extravagant appearance that it suggests some grander purpose, transcending the purely ornamental.

At Burning Man this year, The Folly will be an epic piece of art with the atmosphere of an unruly village, providing shelter, fun, and perspective to the residents of Black Rock City.

With many layers and levels, The Folly will create a challenging, and dynamic environment for all who visit. Ladders, tunnels, suspension bridges, and climbable surfaces will invite adventure; secret doors, puzzles, and outright misdirection will challenge wits. At The Folly’s highest levels, lofty observation decks will reward the bravest with mind-altering views. The stage will feature theatrics, ballet, spoken word, music, circus arts, and burlesque performances, both planned and spontaneous.

The team behind The Folly is comprised of experts who’ve lent their minds and hands to build some of the most iconic Burning Man pieces of the last five years. A testament to their reputation, The Folly’s crowdfunding campaign has brought in $53,150 – nearly 90% of their goal. 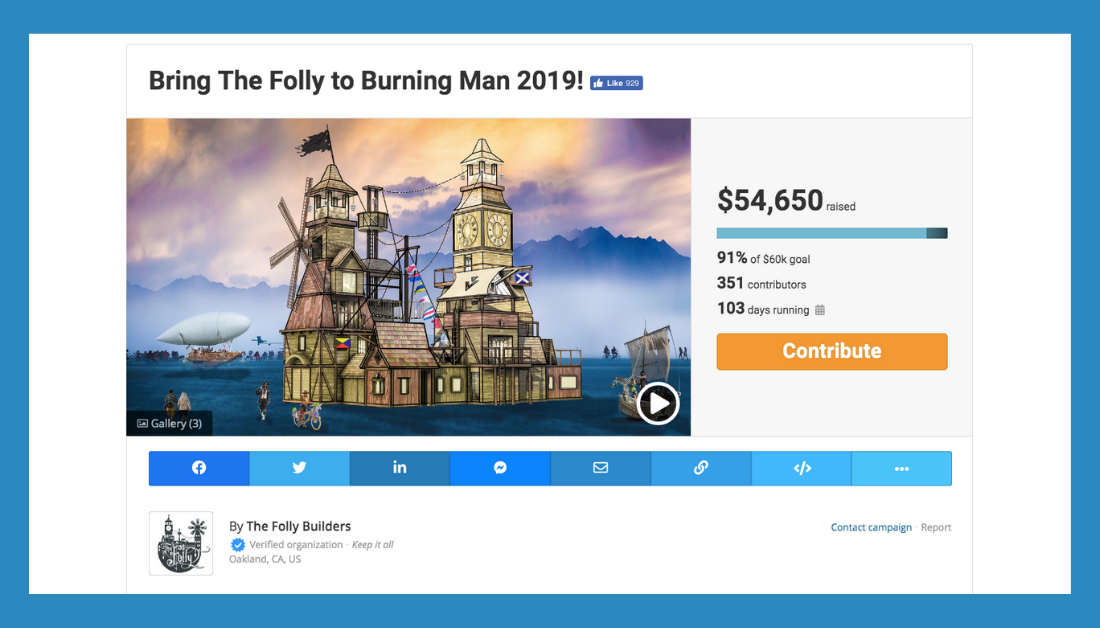 The Shrine of Sympathetic Resonance

The Shrine of Sympathetic Resonance is a massive, interactive musical sculpture built out of 90 piano harps.

It immerses participants among 20,000 musical strings that sympathetically resonate the sounds they make while inside. The wonder & joy induced by this experience invites participants to play with their own sounds by singing, laughing, crying, or howling.

The Shrine is made up of five pentagonal chambers around a tower rising up from the center atrium. Festival-goers can enter through five arch doorways into the open space, which resembles a small open air cathedral. Every wall is made from a piano soundboard – including the musical strings, metal harp, and the wooden frame.

Through a prestigious Black Rock City artistic grant and the donated labour of skilled volunteers, the Shrine was able to secure 85% of the funds needed for this huge project. They have used crowdfunding platform to bring in the $23,800 they still need – with great success, as they’ve now raised over $20,000. 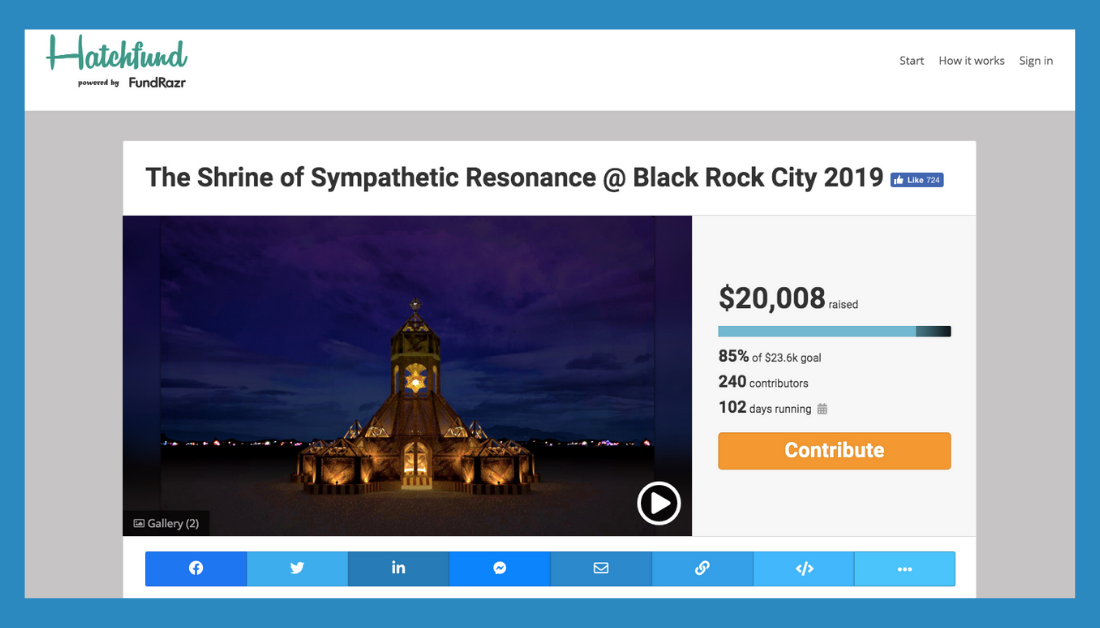 Imagine seeing an 8 foot tall, 108 foot wide transparent circle with glowing laser cut images in the distance, from across the desert, beckoning you like a beacon. As you approach the entrance, a humanoid form stands sentinel, two pieces of luggage on either side. Above the entrance is a sign; everybody has a story to tell.

You enter the circle and are greeted by 36 humanoid forms that stand relaxed, arranged like 12 spokes around a center hub.

Each form is a blank canvas, its chest  displays its heart and holds a cultural theme. Permanent markers are available and you recognize the invitation – a call to explore and express human connection.

Created by Sharon DeMattia, We the People is an art installation about human connection, nature, technology and an integrated future.  DeMattia has raised over $20,000 towards the project. 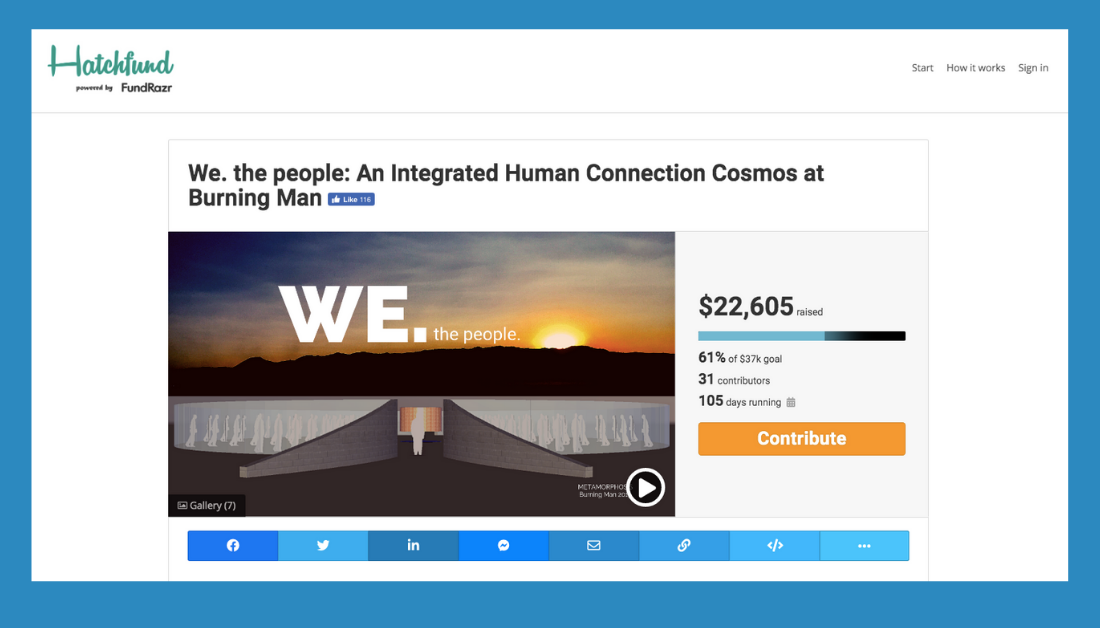 Created by artist Zoe Fry and the Introverts collective, The Ovule Installation is an exploration of the feminine self.

A large, inviting egg shape anchored to the earth by glowing emerald roots, it will contain three primary elements; a self portrait by Fry, a tree, with bark composed of smaller sculptures representing the spectrum of gender, and a chandelier canopy of natural materials. Over the course of the festival, those who visit the installation will collaborate together to produce a book of essays on feminine values.

The Ovule has creatively used Hatchfund powered by FundRazr, calling not only for financial donations, but for submissions from artists who would like to collaborate. They also offer a variety of Perks to their donors, including stickers, the to-be-created book, and tickets to an exclusive party. 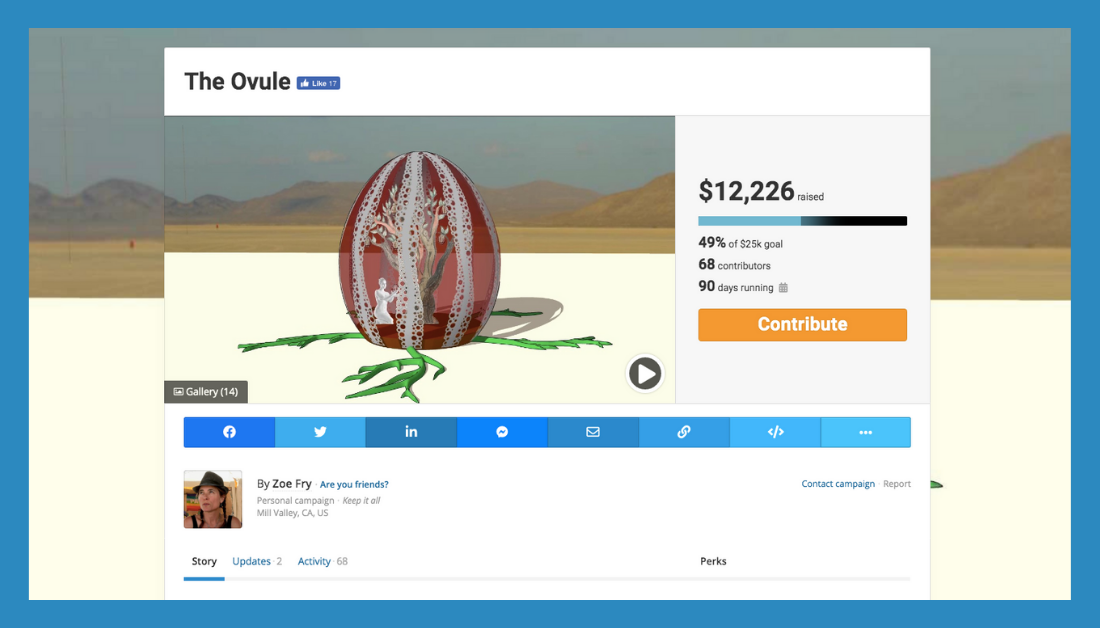 The incredible artworks described in this article show the power that crowdfunding can have for the creative fields. For many people, medical bills or school field trips may come to mind before art when they think about crowdfunding campaigns. However, the arts have more in common with these types of causes than one may think.

All the above campaigns bring people together to help realize a creative vision, empowering them to reach a goal that may seem ambitious, or even impossible. The takeaway for artists and creative professionals is relevant far outside of the Burning Man community – don’t overlook crowdfunding when you want your art to reach thousands of people

Back to the blog