LEEANN COLE- "Working for you in Ward 7"
Donate
Campaign extended! Our deadline has passed but you can still help. ✕ 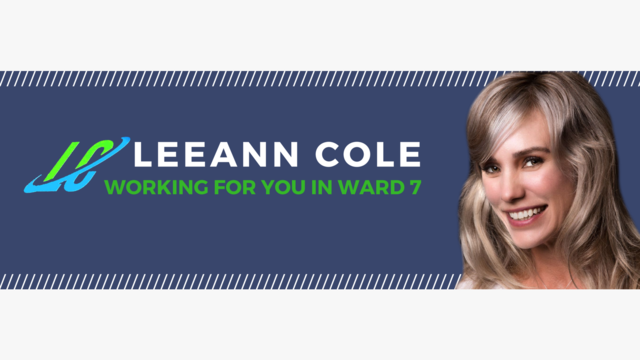 Good day to everyone,

I am very happy and excited to announce that I will be running in my home ward, Ward 7 for Mississauga City Council. As many of you are aware, voting takes place this year on October 22. This is an exciting time for me as I embark on a journey full of learning and idea-sharing which will also include a great deal of immense work and dedication. I look forward to leaning the issues of concern to Ward Seven residents and sharing my proposals and background.

I have always remained very active in the Mississauga community, contributing to a variety of different organizations and groups. My church, which I have belonged to since infancy, is here in Mississauga. As a child, I also competed with the Mississauga Gymnastics club that originated on Mississauga Valley Boulevard, now located near Iceland arena. I competed in gymnastics for over 20 years of my life and then moved on to martial arts training where I competed for another 11 years. I completed my Bachelor of Science Honours degree at York University because I truly believe in health and well-being, as well as fitness. I currently train prospective police applicants in attaining their fitness goals.

Following my degree, I obtained my nursing license and became a Registered Nurse in Ontario Working as a nurse, it brought me awareness on issues such as Elderly Care, accessibility issues, child and adolescent care as well mental health issues in the community. I have worked as a Nurse in the Brampton Hospital in Mental Health and for the Region of Peel in Maternal and Child Care.

Previous to becoming a Nurse, I worked alongside the Ontario Provincial Police at Port Credit detachment in Mississauga for a period of five years. I also became active with Regional Police as supervisor of the Victim Services program. My dedication to supporting charities stems from my past involvement as United Way Fundraising Campaign Leader for City Hall Mississauga as well as supporting causes such as local hospital causes, a supporter of Invictus Games athletes and volunteers from around the world.I am passionate about sharing stories and inspiring others, which led me to join Tedx Mississauga as Director of Marketing and Public Relations in 2015, whereby TEDx Director, Rhyan Ahmed, and I held TED Talks (TEDx) at the Living Arts Centre in Mississauga.

My awareness and love for my hometown of Mississauga, has prompted me to run for Ward 7 this term. I do not take this journey lightly as we have enjoyed excellent representation from our thirty-year past councilor who is retiring. I think its time for new blood and not a political insider.

My priorities improved transit which is a game changer for Mississauga, particularly Cooksville and the City Center area, implementing the Vision 2020 dream of a more intensive street oriented village like Square One area, safer streets for our children, more access to parks and recreation and better relations with our Police. I know first hand as a Nurse and a Mom how important safer streets and more after-school recreation opportunities are for our children. I know from my work with the Police and as a Nurse the issues we have with integration and violence, and after-school programs are one of the best solutions. Gymnastics and Martial Arts were critical in my teenage years, let’s ensure all our kids get as many opportunities as we did.

Throughout this process I will be learning and growing with my community members, remaining open to suggestions and feedback as well as thinking through any concerns that come my way from members of the public. I have always been noted as a thinker and someone who asks “why” consistently until the problem is solved. I believe this personality trait will serve me well in keeping Ward 7 a beautiful, affordable, accessible and safe place to live.

Leeann Cole- Working for Ward 7 hasn't posted any updates yet.
Newest | Oldest
Show more
NEW Thank you emails can now be sent directly from the Transactions page.
Alternatively you can still leave a comment here.

Leeann Cole- Working for Ward 7 is managing the funds for this campaign.