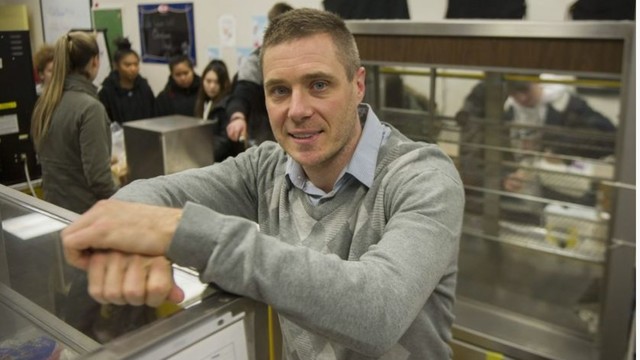 Each month, kitchen staff at Langley Secondary serve more than 2,000 breakfasts to students arriving at school hungry, many of them refugees, immigrants, or from local families struggling with poverty.

About 120 students a day come to school looking for food.

"These are the neediest kids. The principal doesn't know what he's going to do unless we can find another source of funds," said Hendy.

The school is asking The Vancouver Sun's Adopt-A-School campaign for $10,000 to help pay the cost of breakfasts and lunch.

At least 40 students a day arrive without food and are provided with a free lunch.

"These are our most vulnerable students who can't afford to bring lunch to school," said Hendy.

Breakfast and lunch for students in need have been subsidized by money from the provincial Community Link funds, the Langley Foundation (lunch only), and the Christian Life Assembly, which is next door to the school on 56th Avenue.

It costs the school $28,000 a year to feed students who would otherwise go hungry all day.

However, one of the major sources - Community Link funds - is being withdrawn from the breakfast program as the school district repositions its use of the provincial grant.

This leaves Langley Secondary with just the church next door for help with breakfasts.

And the school needs more than that, said Hendy.

"There will be a deficit of about $9,000 this year for breakfast. Our goal is to ensure that no child goes without breakfast or lunch each day," he said.

Christian Life Assembly sends in volunteers twice a week to help set up and serve breakfast and then stay to clean up.

The church gives the school $200 a month to help toward food costs.

"They are our neighbours. We are right next door and we want to support the school," said church member Mandy Martens. "We asked what we could do to help, and they asked if we could help with breakfast."

Hendy is asking for individuals, organizations and companies to come forward and help the school.

"We invite the community to help us. Our project and long-term goal is to make the breakfast and lunch programs sustainable for years to come," he said.

"The school doesn't have a lot of community support or a lot of people coming in to help them. Grants are great, but if they ever dry up, you need local volunteers attached to the program to keep it sustainable. If we get community help, then the money from The Sun, instead of lasting just one year, will last several."

The Vancouver Sun Children's Fund Society hasn't posted any updates yet.
Newest | Oldest
Show more
NEW Thank you emails can now be sent directly from the Transactions page.
Alternatively you can still leave a comment here.