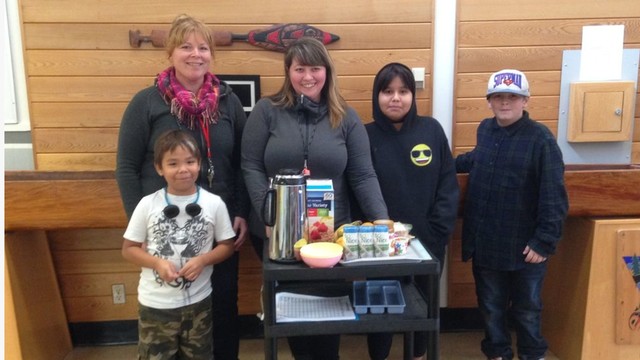 It's easily the worst moment of the day when a hungry child comes to her for food and there is nothing to give.

"Yesterday I told a child she was getting the last apple. I had nothing for the other kids who were hungry. I just don't ever want to be in this state."

So De Vries has applied to The Vancouver Sun's Adopt-A-School campaign for help.

North Oyster doesn't appear to fit the profile of a school that needs it.

"This is not a school that is seen as having a need," she says. "We are kind of unique. We are in the country just outside of Ladysmith and are the only French-English elementary school in the district."

Most of its 331 students show up having had breakfast and with adequate food for a snack and lunch.

But there are others who come to school hungry or without enough food to get them through the day.

"We do have some families who are struggling," she says. "Some of the children eat all the food they have at snack and have nothing left for lunch."

Four years ago the school began soliciting donations of food from a Save-On-Foods store and more recently food from a local food bank, usually bread.

But some weeks it's not enough and De Vries said they never know what is being sent until it arrives.

"Today, for instance, we ran out of food and an EA went out and bought some ham and bread for sandwiches."

There is nothing in the school's budget for emergency food, so the school raised about $1,000 last Christmas from the proceeds of sales of Purdy's Chocolates.

"We gave out Purdy Christmas catalogues to the staff and families for them to order items and we got a percentage of sales," she says.

But that won't get them through the year as they are feeding an average of 12 children breakfast every day and about 16 children lunches and snacks.

"It's a struggle towards the end of the year," De Vries says.

Breakfast is mostly oatmeal made by the school's two education assistants, Krista Benjamin and Stephanie Pelletier, who then deliver it to classrooms on a trolley. Sometimes they also have yogurt and fruit, but De Vries said she would like to supplement this with protein such as hard-boiled eggs.

There is a kitchen in the school, but no paid cook so the meals consist of oatmeal for breakfast and sandwiches for lunch.

"If we had the money I could get eggs and prepare them at home over the weekend and bring them in on Mondays," she says.

Not only is the school short of food, there is little or no equipment available to the EAs. When they run out of plastic spoons or don't have enough sandwich bags, the money has to come out of the dwindling sum raised from selling chocolates.

Not only does the school need money for food and kitchen supplies, De Vries said some children are not adequately dressed and need coats, hats, boots and gloves to get them through the winter.

"If we could get some help it would make a huge difference. It would be absolutely awesome."

The Vancouver Sun Children's Fund Society hasn't posted any updates yet.
Newest | Oldest
Show more
NEW Thank you emails can now be sent directly from the Transactions page.
Alternatively you can still leave a comment here.