Help save Spooky!
Contribute
Campaign extended! Our deadline has passed but you can still help. ✕

No thanks
Help save Spooky!
✖
Gallery (2) 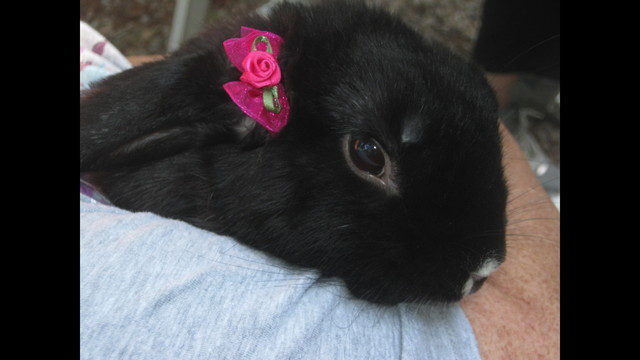 $214 raised 31% of $700 goal
14 contributors
6 Years running
Contribute
By Lauren Watts
Are you friends?
Personal campaign Keep it all
Warwick, RI, US

(8/17/13) After Spooky's passing we have been met with revelations along with more extraordinary tragedy. After bringing spooky to the emergency vet we found out that he sat for 12 hours unassisted in GI stasis, until the specialist finally looked at him. Leaving him far behind any reasonable help that could be administered. After being told that he was getting better and that I could visit that eve, he died moments after I arrived, in my arms. The reason why we brought him to the vet that night was so he could receive proper care that we could not give him at home. Now that I know what happened, he probably would have lived if we just kept him at home and took him to his regular vet early in the am, he would have gotten the care he needed in time. Its my belief that the only reason why the specialist finally saw him was because I had called to check on him an hour prior. To further worsen the situation, the vet recommended not allowing me to bring spookys body home to give his bondmate closure after I asked several times if it was necessary. However she did offer to do the necropsy for free, this would turn out to be an even more tragic decision. Within in 24 hours I realized the incorrect advice that was given on the situation when Spookys bondmate, Salem started refusing food and water. Already being thrown so far behind with vet bills I reached out to a very experienced rabbit rescuer, where I adopted her from, for help. She insisted we bring her to see her immediately so she could assess the situation to see if she was sick or grieving. Upon arrival the rescuer knew that there was somthing seriously. After many hours of stabilizing her, she was clearly in a GI stasis. After believing she was stabilized enough to make it through the night I left a message with her regular ver to be seen immediatly in the morning. Unfortunatly she did not make it through the night. However her regular vet performed the necropsy the following morning to figure out what happened. I got a phone call a few hours later saying that Salem had gone into such a deep depression that it caused the GI stasis. With talking to our regular vet and the rabbit rescuer, we believe that Spooky had severe gas, we believe that spooky had severe gas the night we brought him to the ER. He had a history of gas that we were able to regulate at home, however this time more powerful drugs were needed. It is our belief that the supposed "stone" they found was something that he had eaten and was processing prior to his bout with gas, and being unattended with gas for over 12 hours, he entered GI stasis.
The loss we have experienced this week is indescribable and remarkably sudden. There are no words to express the pain in my heart. We believe in trying to save our beloved Spooky, we were taken advantage of through maltreatment and greed. Which inevitably caused not only the life of Spooky but also our beloved Salem. We were given the wrong information and they withheld important information, and were forced to use money that we don't have and don't know how we will be able to pay back just for them to release his body for cremation. We thank you so much for caring and taking the time to listen. Spooky and Salem were inseparable in life and now inseparable in death. For anything to thing that animals are lesser creatures are unbelievable wrong, for her love could simply not go on without him.
We also hope that reading this story will also allow you to realize how important rabbits are to one another and how they need to be given the chance to say goodbye.

(8/14/13)Spooky passed away at 7:20 pm tonight August 13th. The vet performed a necropsy on him after i said goodbye. the vet called later to tell me that spooky had formed a gi stone. She is looking further into what could have caused this and will send it out for testing. Even though he passed away we still have outstanding medical expenses and need any help you can give.

(8/13/13)Spooky, our mini lop has been nothing but the most wonderful addition to our family since we brought him home, four years ago right before Halloween, given his name. He is the sweetest bunny believing he is more puppy than bunny, and now his health has taken a turn for the worse. He run and plays with anyone he can, whether you're human, canine, rabbit, or even guinea pig, he will play with you, share his toys with you or simply snuggle up with you on the couch. He is as wonderful and sweet as a creature can be, even while his girlfriend Salem our dutch rabbit bosses him around which he absolutely loves for whatever reason. You just will not find a sweeter and more kindhearted animal.
We could not imagine a single day without him. Spooky is our sweetheart and means the world to us. However, he has recently become very ill. He has entered into GI stasis and has a blockage in his digestive system. GI stasis is very painful and life threatening for rabbits. With his digestive system basically shut down, his body is not able to process and absorb any food or water. He is currently being monitored under constant veterinary supervision at a local veterinary clinic and is receiving what he needs through IV. If medication does not have any effect on his condition, he will have to have surgery once they are able to further stabilize him. As one could imagine this is financially overwhelming and you simply cannot put a price on family, which this sweet bunny is. We are reaching out to all of the kindhearted animal lovers for assistance. Knowing times are tough already, however, this beautiful bunny deserves any help any and all can give. Thank you.
Activity highlights See all14
NEW Thank you emails can now be sent directly from the Transactions page.
Alternatively you can still leave a comment here. Lauren Watts hasn't posted any updates yet.
Newest | Oldest
Show more
NEW Thank you emails can now be sent directly from the Transactions page.
Alternatively you can still leave a comment here.

Lauren Watts is managing the funds for this campaign. The campaign is for a personal cause.