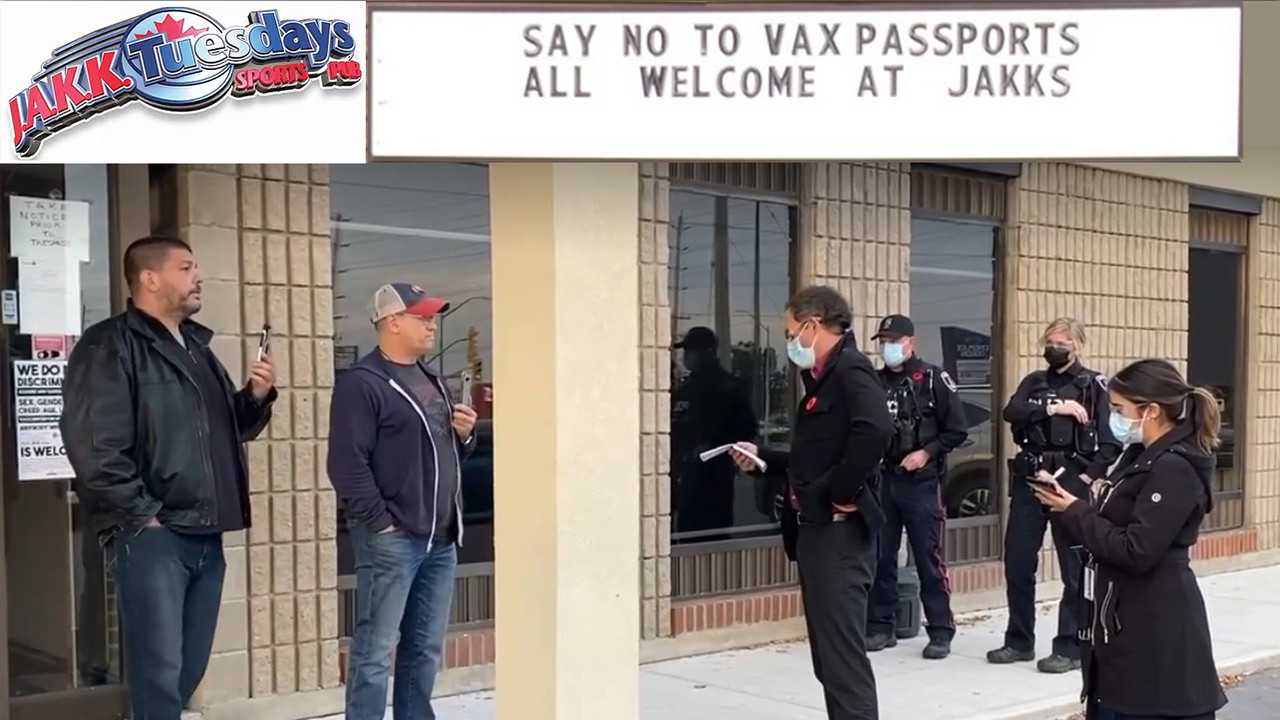 $7,141 raised 45% of $16k goal
69 contributors
12 Days running
Contribute
By Dave Freedom
Are you friends?
Personal campaign Keep it all Kingston, ON, CA

Kingston police entered the J.A.K.K Tuesdays Pub at 5:30am Nov 13 th and forced evacuation and lock changes based on an illegal section 22 closure and an illegal interim court order for closure. This was done only because Kelly refused to require masks and vaccine passports from his customers because to do so would be a violation of their right to privacy and informed consent and the right to be treated equally and it would construe criminal acts against them i.e., threats of lost services, extortion, and inciting hatred.

Therefore no immediate risk necessary to use section 22 of the Health Promotion and Protection Act.

On Nov 11 th and 12 th , 2021 the Superior Court of Justice issued a police enforcement of a section 22 closure. This interim order should never have been issued in the first place because 1. We are not in the state of emergency and 2. no evidence of immediate risk was given for the 22 closure or the injunction and 3. the 22 closure is under appeal as of Nov 5 th . The Judge lied in the reason for the interim stating that no appeal of the 22 was filed by Kelly prior to Nov 12 th . Public health and the sheriff’s office witnesses and Kelly testified at the Nov 12 th hearing that an appeal had been filed. In fact, on Nov 12 th Kelly got notice that his appeal of the 22 closure order was to be heard Monday Nov 15 th . At 5:30am police used force to evacuate the pub and change the locks.

My good friend Kelly Hale, owner and operator of J.A.K.K Tuesdays Sports Pub in Kingston is under attack. Myself and Jane Scharf have been providing Kelly with legal support and many other dedicated freedom fights have been helping him by coming to his pub for a meal after his liquor license was taken because of refusal to enforce masks and vaccine passports.

Kelly has undertaken to fight this to the finish and has shown great courage by refusing the mask and vaccine passport requirements to his customers. And because of his courage and dedication he has a large group of supporters. The supports have been regularly attending his pub and have meals and make donations of money or time to support him. This helps make up for the lost revenue from liquor to help him make up the loss of liquor sales. Because there is no liquor Kelly was happy to host children of all ages. Groups also held events and on Friday we had Freedom Friday. Great people and great atmosphere.

Now we need to help Kelly win this battle by helping him keep his business. We need to help distribute information of what is happening on social media and flyers. And we also need to pitch financially to help him maintain his business.

We are the many, they are the few. It is through mutual aid and voluntary cooperation that we will win this war against communism. Let us help our brother Kelly pull the plug on the public health overreach.

His intentions are to pay as much of these expenses himself from the revenues from a food truck operation once it’s set up. He will continue in this manner while he goes through the various hearing processes to get his pub back!


**NOTE** All donations go directly to Kelly's fund, managed solely by him.

Dave Freedom is managing the funds for this campaign. The campaign is for a personal cause.