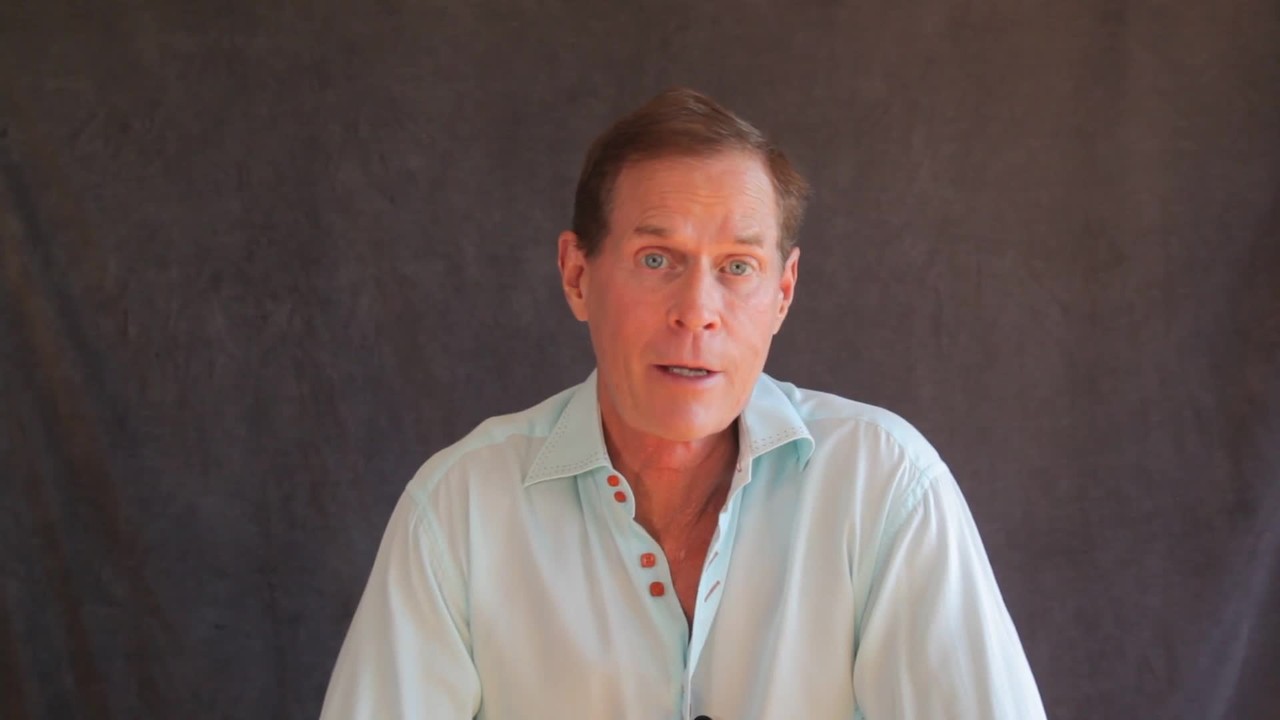 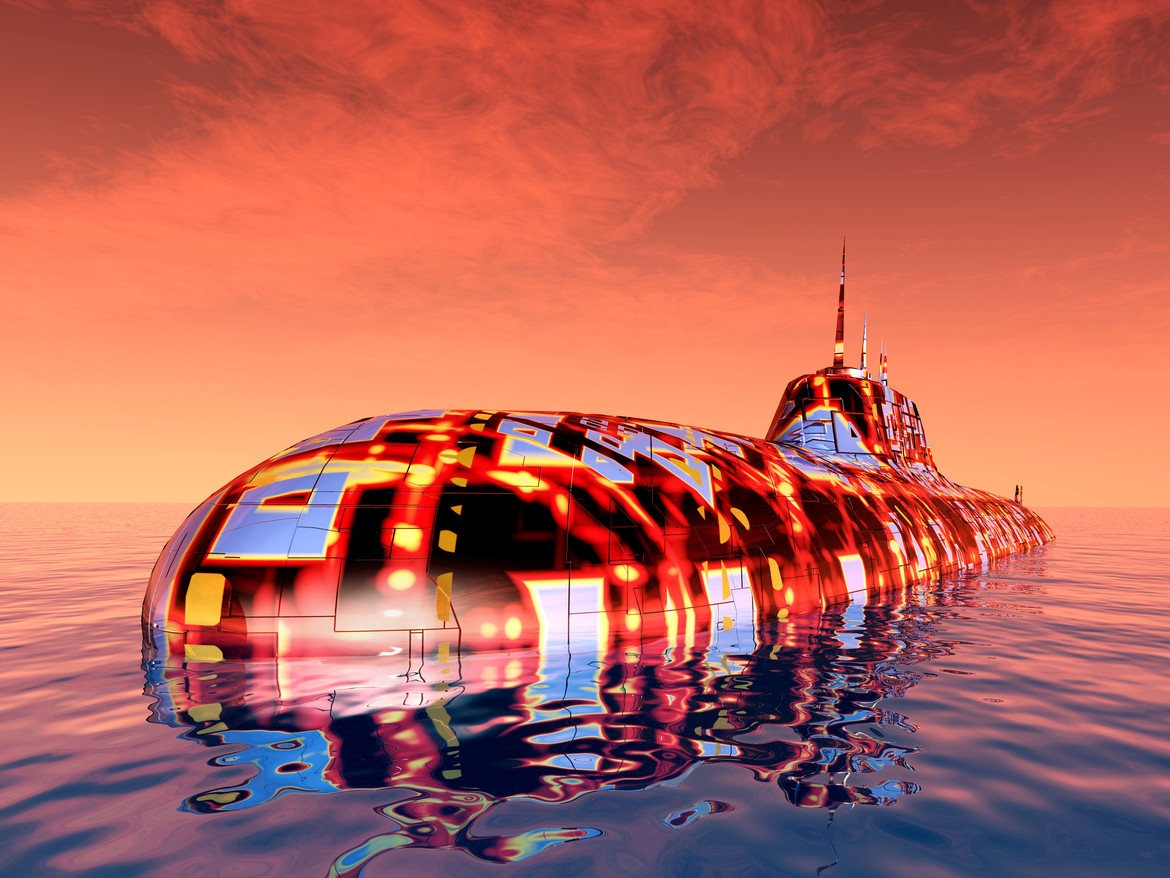 "Invincible Beneath" was a futuristic submarine designed to be the ultimate weapon for first strike attacks. A sub that is un-trackable by any form of sonar, radar, or heat - and it's not nuclear, but has killing assets far more effective.  The arsenal includes the deadliest nano-weapons ever created. Bombs the size of fruit flies.  The genius the "Military Industrial Complex" trusted to invent it at first rejects the job because he and his wife perfected a new generation of Carbon Eating Plants.  Like Tony Stark he's tired of building things that nations and terrorist groups use against innocent people.  The inventor has a new passion; but then he realizes he can use this "invincible" submarine for force nations to correct their pollution and carbon footprint problems if he steals the sub on its first test run.    After a few tyrants try to destroy the sub and crew, the secret weapons surgically remove each individual tyrant via nano-tech specific targeting, with no collateral damage.  This terrifies the world's worst polluters, and proves the sub and crew mean business:  get in line, stop funding war, start funding Climate Change more, and we're buddies.

This is a high-tech, realistic counter-military movie that focuses on this hero Dwight using his genius for what has meaning to him (he's tired of being Tony Stark and killing armies around the world for the Pentagon.)

Like other big-budget Streaming Series, this one will get A-List Actors, win awards, and in its popularity evolve the impact we have on fixing our pollution problems globally.   This film is an ESG dream for a company. And watching these rogue ex-military men trump the Pentagon will be Action-Adventure-Comedy on steroids!    This is an "in your face" message to governments that we know they are not doing all they can to stop what creates the greatest carbon footprint humans make: war!

The plot is creative, surprising, and moves fast through the first season of 9 episodes, with lots of twists in the plot.

HERE IS OUR ENDORSEMENT BY THE HOLLYWOOD REPORTER 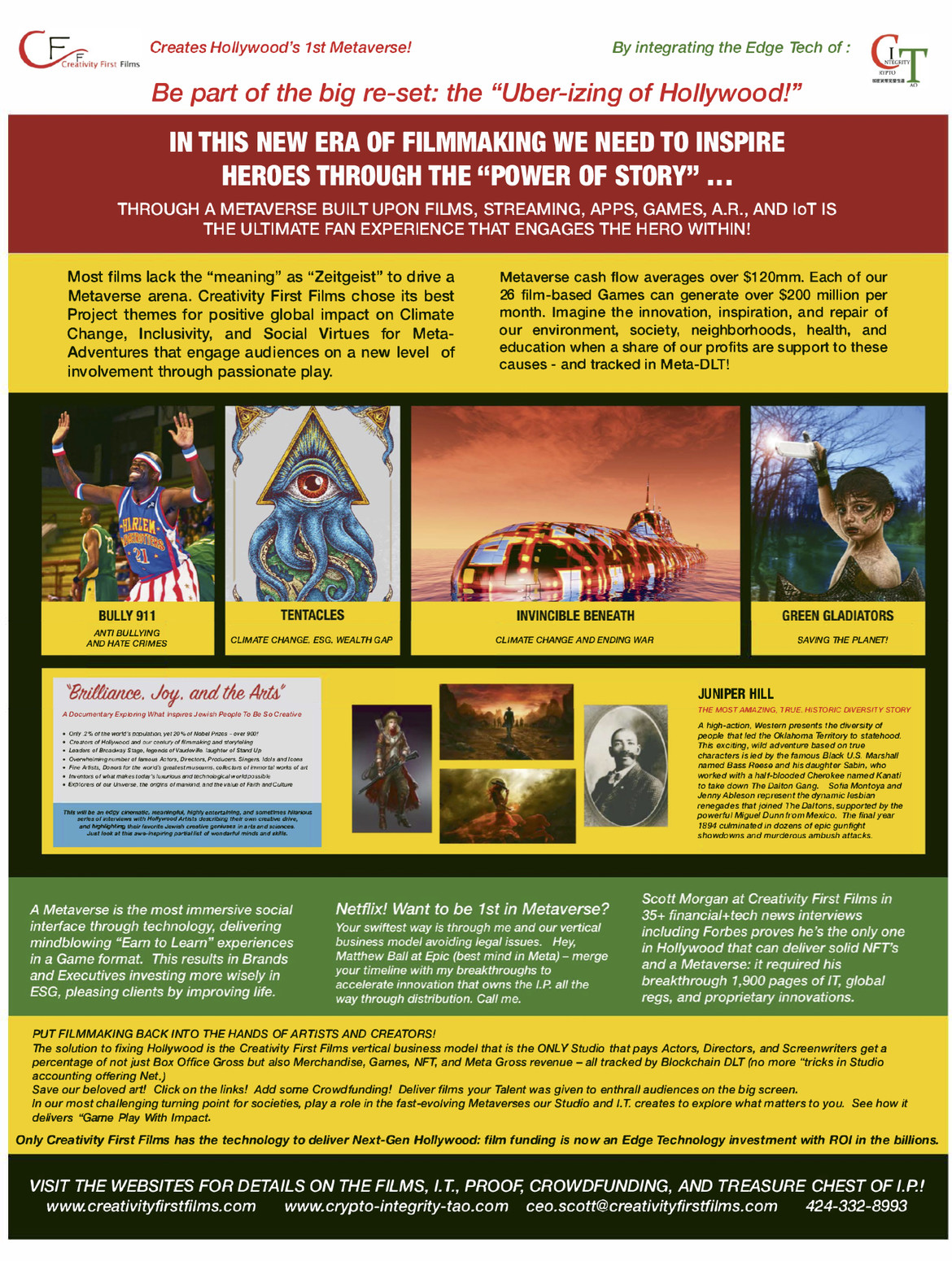 Donating to getting this series off the ground includes Development and Pre-production costs to ensure the idea is not bought and buried by a Network - instead the project goes right into casting and then production. 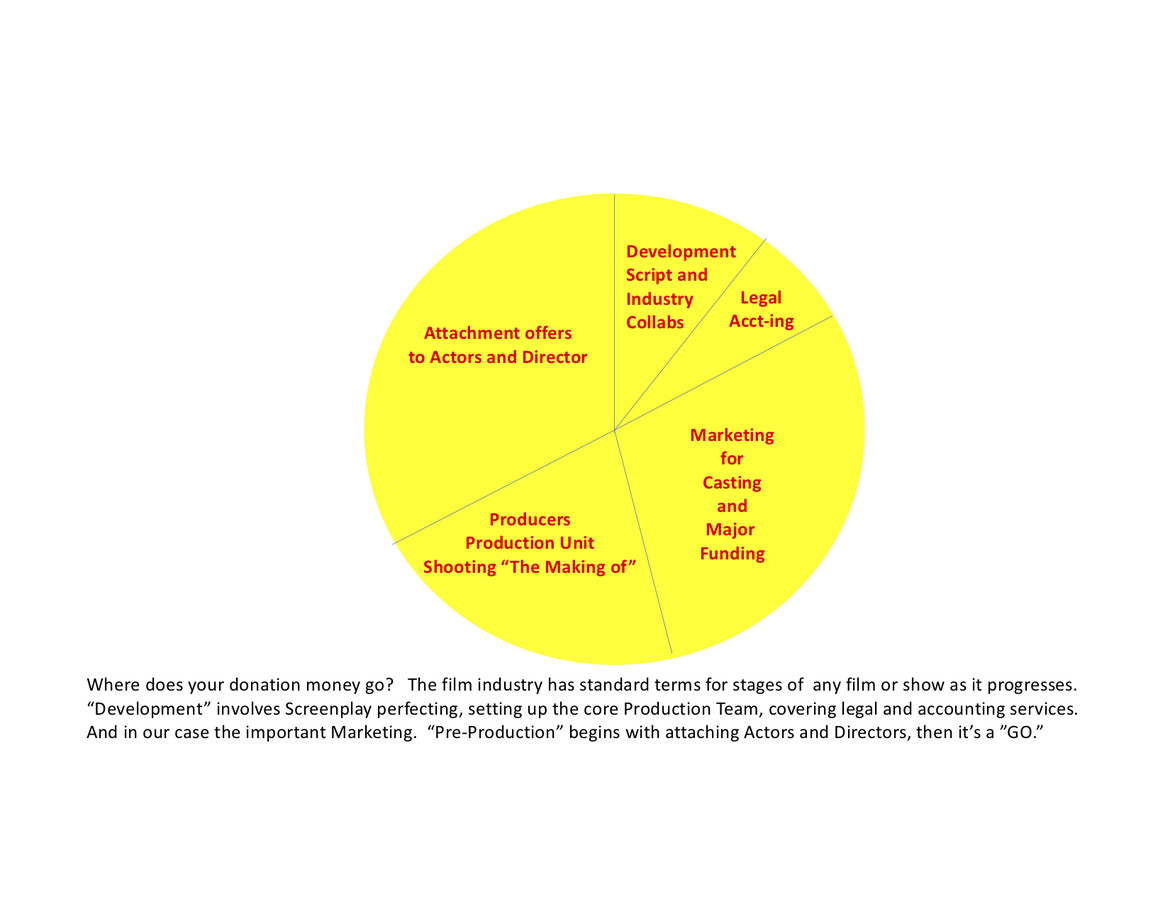 In addition to being a Streaming Series that will be a role model for government leaders and huge businesses, this film will be part of the first Hollywood Metaverse!  Every tech giant has announced that Metaverses are the new tech power of the future - and it's already here!  So far the themes are not based on what is meaningful to us as a society and person - but our Metaverse includes this Series to prove if you want a lasting Game and Metaverse, you must have a lasting world and Nature - right?!  A Metaverse is like a Game that reflects the real world, and it is built out by action and investment.   A portion of the over $100 million per month a good Metaverse arena makes off Games and playtime will go to Climate Change causes and solutions.

AND HERE IS ANOTHER HIGHLIGHT OF MEDIA COVERAGE PROVING THIS IS THE ONLY STUDIO CAPABLE OF LAUNCHING A SERIES AND METAVERSE. 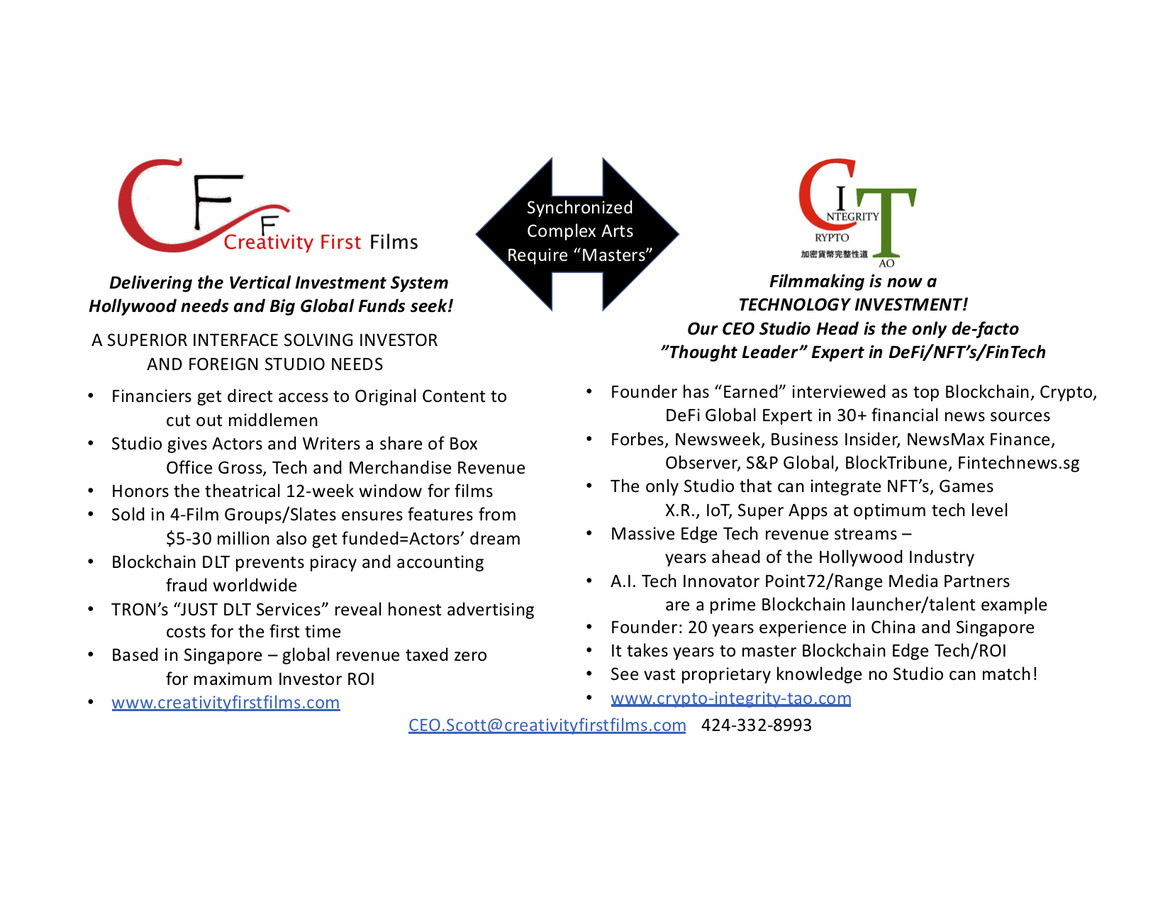 The first money will go to Pre-Production, Casting, Marketing, and the core Production team.  Once this is set up with Actors, the Streaming leaders will be competing to deliver it in top quality, high-budget fashion. And they will support the Metaverse way of "Learn to Earn" which means if you want to go up levels in the Metaverse you need to learn about Climate Change initiatives. This means company donations to the cause.

INVOLVEMENT WITH “THE MAKING OF …”

A PODCAST WITH PRODUCERS TO COVER MUTUAL TECH TOPICS

ON-SET TIME WITH ACTORS AND DIRECTOR

and if you are a business A STRONG ESG ENDORSEMENT IN THE SERIES! 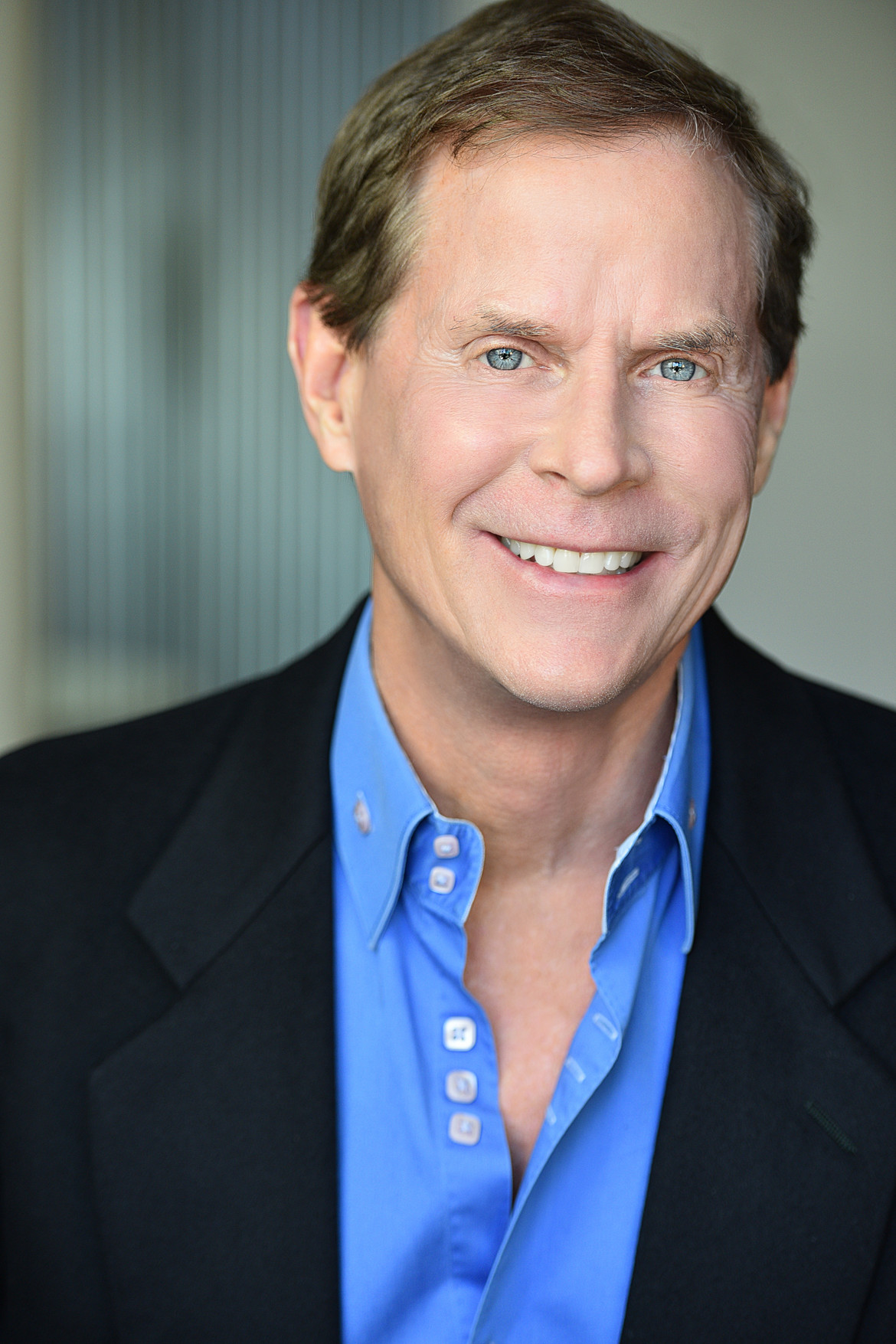 Scott Hadley Morgan has been featured in Forbes, Newsweek, Business Insider, and over 30 more financial, technology, and media news sources as a Thought Leader, Expert Analyst, and Visionary Consultant in Blockchain DLT, cryptocurrencies, NFT’s, Metaverse, and the new generation of Media and Entertainment. As CEO/Founder of Crypto-Integrity-Tao and Creativity First Films he delivers the first vertical investment system for Blockchain potential to be integrated into the production of films generating games, series, apps, X.R., V.R., Metaverses, and even greater Edge Tech products.