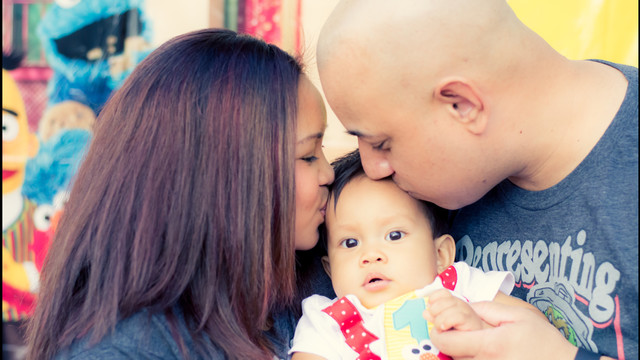 Malakai was diagnosed with Synovial Sarcoma, a very rare cancer on November 10 -- just five days before his first birthday. Maribel and Robert will be spending their time and effort working with Malakai and the special doctors at UCLA to get the best treatment possible. This will keep my sister and brother-in-law away from San Diego and work, starting next week. And while they are truly moved and grateful for our prayers and emotional support, we would like to help them out financially with upcoming procedures and medical expenses. If you would like to help out, please feel free to donate in whatever way you feel comfortable towards Malakai's treatment. Many heartfelt thanks!

MALAKAI'S STORY
... at 4 months, Robert noticed that as he tapped the bottom of Kai's left foot, he would start crying. At 6 months, there was a little bump that was quite tender to Kai; he would guard it from others. At his 6-month check-up, his pediatrician referred them to an orthopaedic surgeon who instructed them to monitor it and that "...99.9% of these little bumps that form on kids are benign." At 9 months, Malakai became more active and the bump was considerably larger and discolored. They asked their pediatrician for an MRI. The report was inconclusive with several differentials. They met with the experienced Director of Orthopaedics who said an excision of the grape-sized mass in his left foot needed to be scheduled. Two-three weeks later, Malakai had his surgery. The surgeon came out and was definitely concerned -- he had no idea what this complex mass was and had it sent out to the pathologists.

Monday: A week later at Malakai's post-op appointment, the orthopedic surgeon dropped the bomb. He said it's Synovial Sarcoma and that the prognosis was not good. Maribel and Robert were in disbelief, devastated; weak inside and out and torn apart. My baby sister called me gasping for air uttering the words, "... it's cancer." I was broken and immediately left work and fled to their side.

Having been through our father's cancer, our emotions were getting the best of us but we knew things would move fast. There was an overwhelming sense of urgency, a desperation for help. Synovial Sarcoma is a rare cancer and Malakai has been the only one diagnosed with it in San Diego. We had no idea what to do or where to go or who to ask. We fell to our knees and each prayed like we never did before.

Tuesday: A CT and MRI of his left foot needed to be performed to ensure there was no spread of the cancer. We were fervently doing online research to see where our starting point could be. St. Jude's did not have any open cases for Synovial Sarcoma. When I returned to work and shared the news with my co-worker, she mentioned that her son, a wonderful pediatrician recommended Dr. Noah Federman at UCLA. He is "the guy" for pediatric sarcomas. We Googled him like crazy and thanked God for setting us on the right path. Their pediatrician put in a STAT referral.

Wednesday: That morning one of my dear friend's husband and cancer survivor, Jimmy Gomez reached out. He is an angel for putting us in touch with his contacts, Tiffany and Patrick, who shared a wealth of information. They reached out to Bel and shared useful advice, knowledge and available resources. They even reached out to a retired doctor who specialized in pediatric sarcomas. He said to Maribel, "Amputation and no radiation." We continued to pray. God was guiding us and we were/are grateful.

Thursday: Dr. Noah Federman's office called Maribel at 4:50 p.m. and scheduled an appointment for Monday, November 24. Maribel and Robert were busy scheduling second opinions with Rady's, UCLA and Stanford. But deep in our hearts, we wanted Dr. Federman.

Friday: At 9 a.m. Margie from Dr. Federman's office called and said he wanted to see them first thing Monday morning, along with his orthopaedic surgeon, Dr. Bernthal. They asked us to do the impossible, gather the pathology slides and reports, all of his diagnostic imaging on CD and all of his medical records. In a matter of hours and with the speed of God, Maribel and Robert got it down.

Saturday: We celebrated the 1st year of Malakai, our messenger of God. Who reminds us to be in the present and leave it all to God.

Sunday: Maribel, Robert, Malakai, and Mom attended a neighbors prayer. There was a spiritual healer who advised Maribel, "No chemo. Do not let them give Malakai chemo. He's too young... pray, he will be fine." That night we hopped in the "camper van" (as Manang Soleil calls it), and checked into the hotel to prepare for the next morning's meeting.

Monday: We meet with Dr. Federman and after finding out his chest CT is negative, he says "It's the best news; it hasn't spread." He also says, "No chemo, no radiation." We all looked at each other and exhaled. God definitely did not want us to have any doubt about Malakai's treatment. Trust. Dr. Federman said that the best outcome for Malakai is amputation in order to prevent reoccurence. That afternoon, we met with Dr. Bernthal, the oncological pediatric surgeon and knew Malakai would receive the best care.

Stanford called and also recommended amputation, no chemo, no radiation. Then we met with Rady's that Thursday. Their oncology team told us they never had a Synovial Sarcoma case and would present it to the tumor board. Coincidentally, the oncologist studied under Dr. Noah Federman and she too reiterated, "he is the Sarcoma King."

Malakai is scheduled for surgery December 9 at UCLA Santa Monica with Dr. Bernthal. Dr. Federman will handle pain and post-care. Thank you for your continued prayers, positive vibes and constant support. God is good.

MaryAnn Toledo is managing the funds for this campaign. The campaign is for a personal cause.