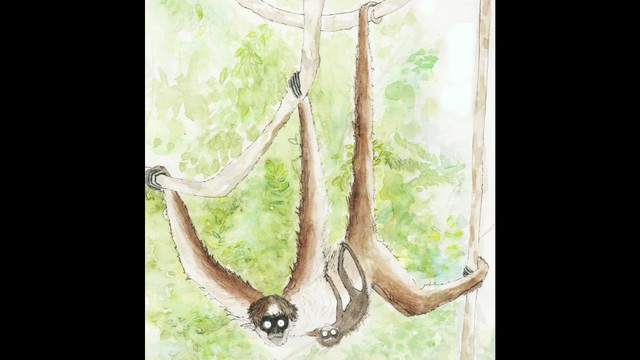 As you all probably know, I’m really into monkeys. After spending 3 years working for a Bolivian NGO which aimed to help wildlife displaced by the pet trade, I started a Masters course in Primate Conservation at Oxford Brookes University to study some of the world’s most endangered primates, in an effort to ensure they’re still around for my nephew Finlay to marvel at when he’s my age.

I’m asking you, dear friends, for a few quid to help me achieve my goal. I know Facebook and the like is plagued by such calls for aid, and you’re probably tired of hands being held out for your hard earned cash, but a couple of pounds here and there could make a lot of difference.

My project aims to study the Critically Endangered brown spider monkey (Ateles hybridus) in Colombia, where only and estimated 9% of its potential habitat remains as continuous forest. The rest of the brown spider monkey’s current habitat is made up of isolated forest fragments, areas where patches of forest have been disconnected from the surrounding forest, primarily by forest being cleared to provide grazing pasture for cattle. I’m going to be looking at the brown spider monkey’s use of these forest fragments, and their ability to move in-between them. Using this information I’ll be able to suggest conservation action which could alleviate the pressures that this species face by being confined to such small areas of forest.  Ill be working with Fundación Proyecto Primates, (www.proyectoprimates.org), a Colombian NGO working towards the conservation of Neotropical primates and their habitats.

To conduct this project I need a few bits and bobs, which if I had the cash, would make things a whole lot easier. For instance, the area I aim to conduct the study in is seasonally flooded, resulting in these big soup bowls of swampy forest, harboring millions of mosquitos, which I’m not a big fan of (see pictures). If you’d be so kind as to donate some cash, I could afford to buy some wading trousers and mosquito nets for the whole team, enabling us not to suffer horribly whilst conducting research, allowing us to cover more ground and complete the project. Other funds will go towards paying wages for a Colombian student/research assistant, whose help will be invaluable, paying for transport, food etc. Basically all the essential stuff that allows research to happen.

I’m not pretending that your hard earned money will change the world instantly, or that by giving 5 pounds you’ll ensure that the (in my opinion) majestic, fantastic and beautiful brown spider monkey will be saved from extinction, but it’ll make my job a whole lot easier and allow the project to run a bunch  smoother .

ANYWHO, there’s a donate button up on the top right, if you fancy parting with £1 or so, I’d be truly grateful.

Thanks everyone, you’re all winners. Chris Marsh hasn't posted any updates yet.
Newest | Oldest
Show more
NEW Thank you emails can now be sent directly from the Transactions page.
Alternatively you can still leave a comment here.

Chris Marsh is managing the funds for this campaign. The campaign is for a personal cause.