No thanks
10000 foot tandem skydive for Wycombe Wanderers
✖
Gallery (1) 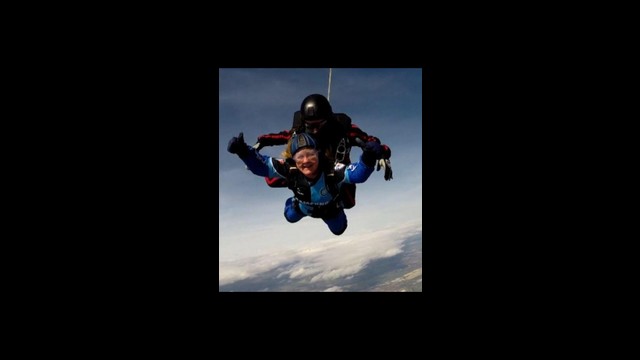 Wycombe Wanderers are a trust owned club that nearly folded 3 years ago except for the work of the board after the takeover. Last season the club had a dramatic a very emotional last day of the season stay of execution and survived relegation to stay in the football league.

This season is a very different story. Manager Gareth Ainsworth has guided his new look team to top of league 2 are currently 2nd.

The squad are one of the smallest in league 2 and the club are financially struggling.

Last June myself and Director David Roberton climbed Snowdon with fans from other fan owned clubs to raise much needed funds. Fellow supporter Frank Burton climbed Ben Nevis and we raised £2715 for the club.

Ive supported the club for 6 years and today 7 feb 2015 completed my 170th consecutive league game. I also volunteer for work parties to help tidy up our football stadium.

The club has given me so much and I can't help financially but what I can do is try and raise more money.

This is something that will test my nerve as I freely admit I'm terrified!

Please donate and help me raise as much money as possible. The team are doing their bit and I want to support them to maybe, just maybe a fairy tale promotion.

Very pleased and proud to say that Gareth Ainsworth is again giving his support.

For anyone that sponsors/pledges more than £5 they will be put into a draw to win a signed pair of Matt Ingram gloves.

UPDATE Sponsirship has reached £1100 with pledges from Gareth Ainsworth, Dobbo, Baz, chairman Andrew Howard and most of the players!

I am very honoured and very proud to receive the Sky bet League 2 fan of the month award for January.

UPDATE in addition to Matts gloves there is also a signed shirt and programme up for grabs for sponsoring £5 or more!

UPDATE Alfie Mawson has very kindly donated a pair of signed boots to the list of prizes.

UPDATE There is also a signed pair of Matt McClure boots to add to the list of prizes!

UPDATE Skipper Paul Hayes has donated a pair of his boots as a prize. These boots have also played on wembleys hallowed turf!

UPDATE total raised has now reached £2500 which is incredible.

UPDATE new target already been passed and now heading towards £3100.

On Sunday I completed the sky dive. After the wind grounded us after the first attempt where we had flown to 5000ft I then had to wait until 2.30.

It was worth the wait and was the most incredible experience of my life!!

Lisa Bowker is managing the funds for this campaign. The campaign is for a personal cause.