Help Finley get on his feet
Contribute

No thanks
Help Finley get on his feet
✖
Gallery (5) 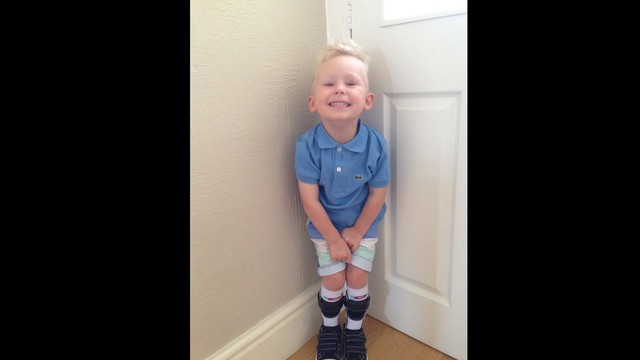 By Louise Braithwaite
Are you friends?
Personal campaign Keep it all
Manchester, GB

Finley was born with cerebral palsy which is a life long condition which effects his muscles. Finley got cerebral palsy through lack of oxygen to his brain which has resulted in brain damage.  The simple things we take for granted Finley struggles with.

Finley underwent an operation in Feb 2016 called selective dorsal rhizotomy. The surgeon cuts through the spine and cuts off some of the stems which are causing Finley's legs to be so stiff. This left him with loose legs which were so much easier to move but revealed the underlying muscle weakness. Finley is now 6 and able to walk with a walking frame although his main way of getting around is in his wheelchair or crawling around the house. Our ultimate goal is for Finley to be able to walk with sticks !

Finley gets 1 physio session a week on the NHS but he is required to do some sort of exercise everyday. He also has 1 swimming lesson a week. We have a private Physio who is £60 an hour who he sees once a week.  Finley is working so hard for her and as you can imagine it is to expensive for us to fund alone so we are kindly asking for people's help to get our little boy stronger

All we want as parents is for Finley to live a healthy happy life and be able to keep up with his friends which ever way that may be.

Thank you for everyone's support and donations it means so much to us ! Xxxx

Activity highlights See all139
NEW Thank you emails can now be sent directly from the Transactions page.
Alternatively you can still leave a comment here.

Louise Braithwaite hasn't posted any updates yet.
Newest | Oldest
Show more
NEW Thank you emails can now be sent directly from the Transactions page.
Alternatively you can still leave a comment here.

Louise Braithwaite is managing the funds for this campaign. The campaign is for a personal cause.