No thanks
Stanley was tied up outside, neglected and abused
✖
Gallery (1) 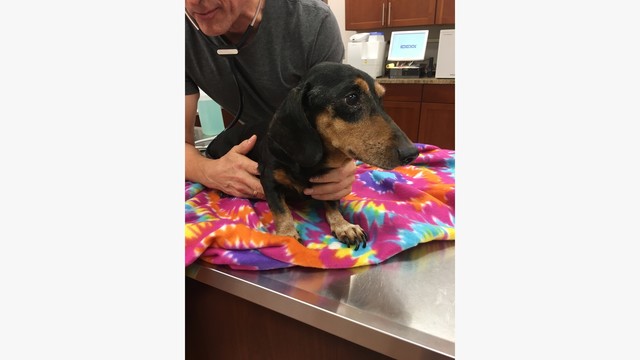 Just when we think we have heard and seen every crazy rescue situation possible, the universe comes along and reminds us that South Florida never runs out of crazy....

We were contacted to assist with an owner surrender...14 years old, naturally.  As is the case with OS's, the story changed a few times...the family was moving, someone in the family was sick, blah, blah, blah, but the ending part of the story remained the same with each reason that Stanley needed to go and that was "cause he was too old and the family was getting a puppy".

There wasn't anything we could to do help any puppy that might be coming to that "family", but we knew that we could get Stanley out of there and so that was what we did.

When the intake team arrived to get Stanley, they were lead to a trash strews back yard, and there was Stanley, tied up in a pile of trash complete with a machete stuck in the tree above his head.

For a number of reasons, the all female intake team got Stanley and got the hell out of the enclosed trash pile complete with machete and headed with him to Pet Medical Center of Boca (which aside from being an excellent practice is also, happily, machete free.....)

Dr. Huges was not even working when Stanley and the transport arrived at PMCB but dropped everything to check him out and as we likely could have predicted, Stanley had all the signs of what was likely a lifetime of neglect: mass on his chest, overgrown nails, a mouth full of rotten teeth, heart murmur, and an enlarged prostate.

Dr. Huges is putting together a treatment plan for Stanley, but we can assure everyone that Stanley has spent his last days outside, tied up in a trash pile and then being traded in for a "younger version".

We want to be there for Stanley and the other "Stanley's" we know are out there and will make their way to our door in the next days and months.  Can you help us cover this Stanley's care so that we can continue to be the "safety net" for those little ones who have been at the mercy of those who don't care?

See all activity19
NEW Thank you emails can now be sent directly from the Transactions page.
Alternatively you can still leave a comment here.