Thank you everybody. Our campaign is now over. ✕
Aidan needs YOUR help!!
✖
Gallery (1) 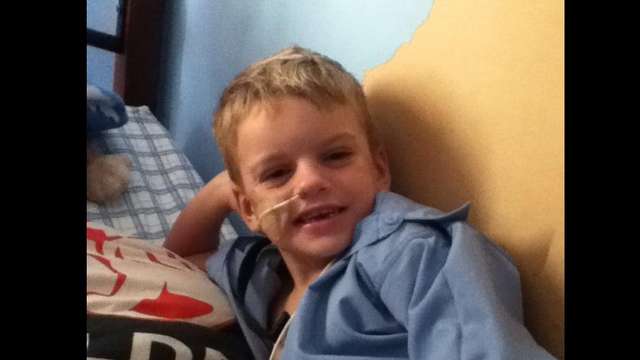 Aidan Jachim is a 7yr old boy with Hollowvisceral Myopathy. This is a rare condition that affects less than 2000 children worldwide. It affects his bowel, bladder and stomach but manifests into other areas and conditions. This was diagnosed at 6 months of age when an x-ray showed his stomach nearly full of bowel mass. It has a life limiting span of about 15 years of age, when his organs will start to shut down. I refuse to think of it as 15 years; I am pushing for 25 years.
Part of his condition is Failure to Thrive; this is a side-effect of not being able to digest food, it takes him 2 weeks to digest anything that he eats. The doctors have combated this with night feeding. At the moment he is being feed during the night through a nose tube but eventually this will be upgraded to a permanent PEG system. (PEG = percutaneous endoscopic gastrostomy) This is done surgically in Sydney. Less than 6 months ago we were discussing wheelchairs as the ability for him to walk more than half a block was almost impossible for him. The nasal gastric feeding has allowed him to maintain normal energy levels for a 5 year old.
His meals have to have a higher content of fats to help him to maintain weight and fluids have to be carefully measured and allocated. He cannot order a school lunch as I have to record everything he eats and drinks which would be impossible if we were to order lunch. One of the types of laxatives that he requires drains the body of fluid to work effectively so we need to double his fluid intake for him. He isn’t allowed a lot of water (less than 150mls per day), 2 glasses of milk, 2 glasses of Orange Juice; and a kids Sustagen milk popper each day. Each day all food and drink that he has consumed has to be monitored and written down.
This condition also affects the bladder with the ability to empty his bladder normally almost non-existent. We are required to drain his bladder 4-5 times a day with each emptying having to be measured and recorded into a separate diary every time.
His bowels block regularly, as often as every 2 – 3 months we can be admitted to hospital with blockages of his bowel. He is on 3 different types of laxative currently, which work in different ways allowing his bowel to stay open and work more effectively. Due to all these laxatives it is not uncommon to have to strip his bed because he has had an accident or to have to clean up an accident on the floor. He is permanently in nappies because of this and a bag of nappies can last us about 3-5 days. This is another diary we have to keep record of which is a visual check of his nappy, and write down the size of output.
Currently he is on about 6 to 8 different tablets, as well as laxative drinks (which he gets down his ng tube), and we can spend a good 8 hours doing medical treatments and medical stuff for him.
Activity highlights See all43
NEW Thank you emails can now be sent directly from the Transactions page.
Alternatively you can still leave a comment here.

Belinda Edwards hasn't posted any updates yet.
Newest | Oldest
Show more
NEW Thank you emails can now be sent directly from the Transactions page.
Alternatively you can still leave a comment here.

Belinda Edwards is managing the funds for this campaign. The campaign is for a personal cause.