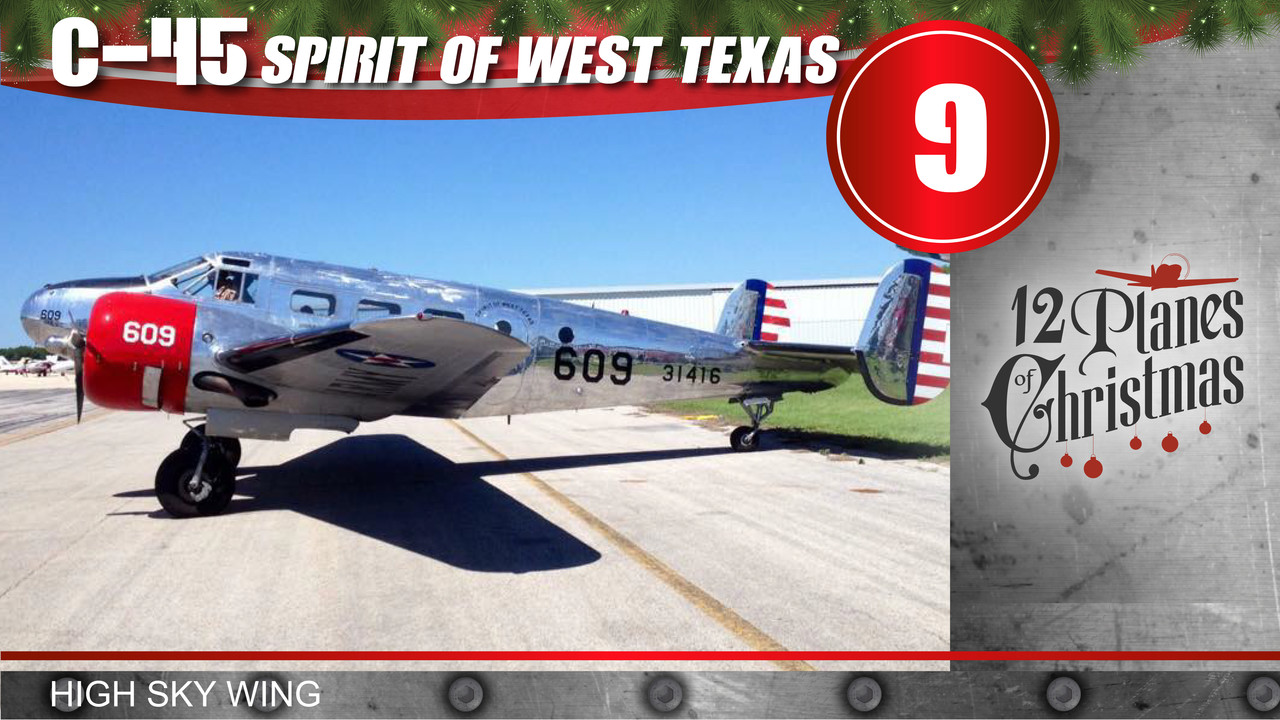 The C-45 Spirt of West Texas assigned to the High Sky Wing is a cherished aircraft for community. This C-45 is painted in markings that are representative of the training aircraft once stationed at Midland Army Air Field (MAAF) in 1942-1943. These markings connect this aircraft to the history of the local area, and acknowledge the important role the training at these air fields played during the war years. The Midland/Odessa Texas-based CAF AirPower Museum into a fantastic museum that tells the story of MAAF. This C-45 Expeditor is a vital part of telling that story.

This C-45 replicates the AT-11 Kansan, the advanced trainer configuration of the C-45 which was used extensively to train bombardiers. MAAF was the largest bombardier training base in the country during World War II. Many of the long-time residents of Midland and Odessa have relatives who chose to move to the area due to the War. Some museum visitors have remarked that their fathers or grandfathers flew C-45/AT-11 airplanes while stationed in the Permian Basin. Because of the efforts of the High Sky Wing, the role of MAAF, the sacrifices made by West Texas during the War, and the impact on the societal and economic development on the Permian Basin is not forgotten.

The Unit has kept the aircraft in excellent condition through the years. She is used regularly as an engagement tool for inspiring pilots and generating revenue to support the CAF's mission.

Spirit of West Texas is due for an inspection and overhaul of both engines in the coming weeks. The Unit would like to perform this safely, but also as swiftly as possible so that the aircraft can return to flight soon. Any donations received this winter will be applied to the overhaul of the engine.

The C-45 is the primary community outreach tool for the High Sky Wing. Spirit of West Texas stays busy throughout the year attending regional airport fly-ins and airshows. She is often a feature of the local Memorial Day and July 4th events. She has become a hook to engage people of all ages to learn more about the role of West Texas during World War II.