Thank you everybody. Our campaign is now over. ✕
Help Justin see for the first time with Enchroma!
✖
Gallery (1) 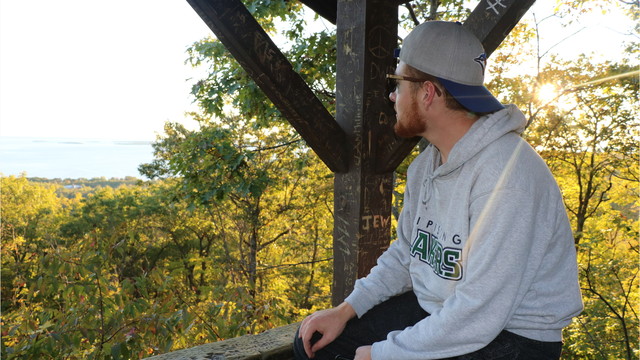 Over 300 million people worldwide are affected by red-green colour blindness, and a poor boy named Justin is one of them. Enchroma has created glasses which enhance colour vision so that individuals may see real, uncompromised colour for the first time!

Like you and me, Justin wants the good things in life - health, love and freedom. But unlike you and me, there is something holding him back from his full potential - colour blindness.

Justin is a healthy, competitive guy who loves to win. But due to extenuating circumstances, he takes the L a lot. At our volleyball season opener, he asked me at least five times, "Which line is out?" After about the third time, I began to shout, "the green one!" The issue was with the designers, who decided to paint lines on the gym floor overlapping in every direction, and with Justin, who could see nothing but differing shades of dull, similar-looking colours. Our team chose to blame the loss on the problem of Justin not being able to see the boundaries, definitely not because of his lack of skill.

Justin also suffers in matters of love because of his difficulty with choosing a matching outfit, which may deter potential mates from approaching. The poor guy always needs help when shopping, and often asks the non-colour blind population for an opinion on his outfit before he goes out into public.

Finally, Justin cannot reach the full potential of his freedom without possessing the ability to get around. Although driving does not always pose an issue, Justin sometimes has difficulty with traffic lights. He once said, "All I know is that if the bottom circle is lit up, you stop. If it's the top circle, you go." The real problem occurs when he visits a new place where they think it's a good idea to have horizontal traffic lights.

As you can see, there are many obstacles for Justin to overcome, but it is my hope that Enchroma glasses will start him down the right track to achieving his goals! Please support Justin in his journey of becoming a man and help him see the real world for the first time! Anything helps, even a like or share!

Below you will see some first time experiences with Enchroma: Karlee Winegardner is managing the funds for this campaign. The campaign is for a personal cause.