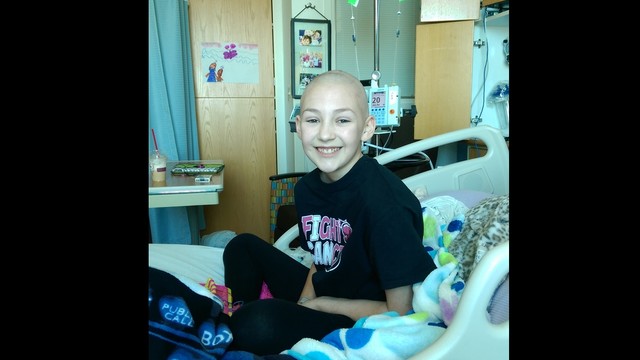 My name is Cassie and I am Jaden's mom. I want to thank you for taking the time to read Jaden's story ~

Jaden is thirteen years old and in 8th grade. She loves to dance and wants to try out for the high school track team next year. She has an eleven year old brother, eight year old sister and four dogs that she loves dearly.

For most of the winter Jaden had not been feeling well but we couldn't figure out what was causing her fatigue. In early March we noticed she had swollen, bleeding gums and swollen lymph nodes in her neck. We scheduled a visit to the pediatrician on March 9th, 2015 where Jaden's blood work results came back all askew indicating that something was clearly wrong with her blood. Her pediatrician sent labs to Children's Hospital in order to diagnose exactly what was causing the abnormal results. Her pediatrician sent us home and said she would call me at home that evening to let me know the results. We were also instructed to pack bags because she said it was likely that we would be checking into the hospital that night.

I had been anxiously waiting all evening and then at 7:03 pm on March 9, 2015 her pediatrician called to let me know that Jaden had leukemia. I had already suspected this diagnosis, but hearing the words spoken out loud took my breath away. Jaden was admitted to Children's Hospital that evening and began chemotherapy that same week.

AML is not your typical childhood leukemia and requires aggressive chemotherapy and long stays in the hospital. Jaden basically has no immune system for weeks after the chemo and can not leave the hospictal due to the high risk of infection. She had family and friends with her around the clock so she wouldn't be alone. I took weeks off work so I could be with her and help her as she received the medicine needed to kill the cancer, but in turn left her weak and in need of help with basic tasks.

Jaden returns to Children's Hospital on Tuesday where we will repeat this process all over again. With current treatments, remission, and cure of AML are a very real possibility for Jaden. She will need months of treatment to ensure that the cancer is destroyed and doesn't return.

This fundraiser was started to help offset the costs of the medical bills, the lost revenue from not working, helping buy her the food she likes once her appetite returns after chemo, and whatever other needs she may have while in the hospital.

Anyone who has ever met Jaden knows what an amazing young woman she is. Any support for her during this trying time will be greatly appreciated. She has already decided that whatever funds are not used to cover costs related to her care will either be donated to charity, or used to buy items for the kids who are battling cancer on the Oncology floor at Children's Hospital. For those who know Jaden this should come as no surprise.

Cassie Kosch is managing the funds for this campaign. The campaign is for a personal cause.