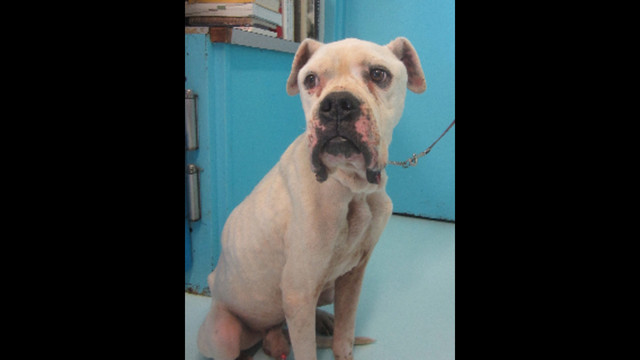 Monday, 1/26/15 we will be picking up MAGNUS from a local shelter. His time ran out and he needs plenty of TLC.

This is how he ended up in a shelter and a dire situation:

"They had a call about a dog that was abandoned at a vacated house for at least a week. This is what they found. Magnes was listed by ACO as a Boxer, but we think he's an emaciated American Bulldog. He only weighs 58 lbs and you can see every bone in him. In spite of his condition, he is very sweet."

This is the assessment on him by the shelter:

"Magnes is estimated to be 5+ yrs old. Surprisingly, he did test HW-. He loves people and lots of petting. A man w/ his kid came over to pet him while we were outside. I haven't seen him up close w/ other dogs yet. But he did seem a bit over-interested in the caged cats in lobby.

Based on his poor condition, he needs a rescue tag ASAP... He's a sweetie, but you know the routine. So I'm hoping he tugs at your heartstrings?

If you think you may be able to help, please let me know. He's a bit wobbly, but his mood and spirit is good." 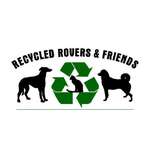 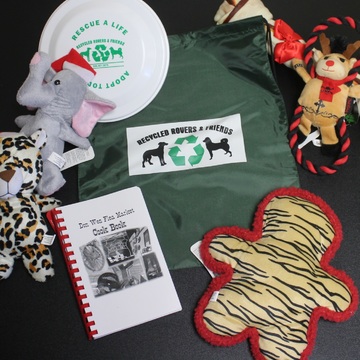 $50 USD
An official RRF cinch bag
With a donation of $50, you receive an official cinch bag from Recycled Rovers & Friends No-Kill Dog Rescue Shelter with two mystery items. It's 17" x 14-1/2" and pretty roomy for gym clothes or doggie toys for the dog park! Save a life. Donate.
More ... Less ...

Recycled Rovers & Friends is managing the funds for this campaign.