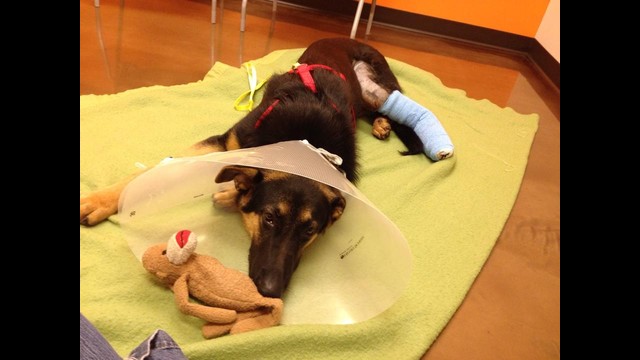 $1,450 raised 18% of $8k goal
27 contributors
5 Years running
Contribute
By Gwen Bross
Are you friends?
Personal campaign Keep it all
Lititz, PA, US

On saturday I received a phone call from my very nice neighbor that my puppy had been hit on the road. I was about 2 hours away so I called around and found a friend to run him to the vet. I spent the next hours wishing I could be there with him and getting there as quick as I could. When I arrived I waited outside for a while because they had the door locked because it was after hours and finally someone came out and let me in. The doctor came out with a look on her face that broke my heart. I have never heard the word severe so many times BUT she also informed me that he had survived so far which was a very good sign . She told me if I wanted to try to save his leg I would need to drive about an hour away with him to where they had a specialist . After paying my bill there I drove down to hope veterinary specialists in malvern, pa. They spent a few more hours cleaning his wounds all the while assuring me that at this point chief would be fine . It will def be a healing process and at this point I still don't know if they can save his leg but they are going to try. Chief is being such a fighter.the bills I have been quoted including what I already paid the vet who saved his life come to $13,300-16,300 which can change depending how surgery goes but at this point it's a waiting game. Thanks for all those that encouraged me in so many ways weather it was taking my dog to the vet when I couldn't be there , driving me down to the specialist, thoughts, prayers, and everyone who encouraged me to set somethin like this up so they could help out. I'm amazed by it all. Thank you! Gwen Bross is managing the funds for this campaign. The campaign is for a personal cause.