No thanks
Isaac's Rescue Flight Was a Little Bumpy
✖
Gallery (3) 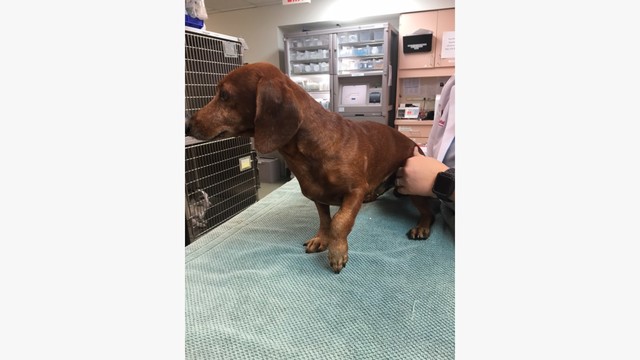 Isaac thought he had hit the motherload....he had been a stray on the streets in Puerto Rico and had been scooped up by a rescue there.  Then things got even better as THAT rescue was a partner with DRSF and Isaac was going to come to Florida as a DRSF doxie.  What could go wrong?

Isaac was loaded into a crate early in the AM to make the flight with many other dogs who were lucky enough to have a ticket out.  A bit of a long day, a long ride, many new smells, and some scary noises, but it was all smooth sailing from there on out, right?

The good news is that Isaac arrived in the MIA safely with the rest of the dogs who took the freedom fight.  The bad news is that he came out of the crate unable to bear weight on his left front paw and his leg was pretty swollen.

President Pam had gone down to get him and a quick text to the team in PR confirmed that Isaac was weight bearing on all 4 limbs when he left, so something must have happened during the flight.

The Pambulance re-routed to LeadER to have Isaac's leg looked at and some x-rays done along with the regular work up that all dogs receive when they arrive.  It has been a crazy week already, but we need your help to keep the doors open for dogs like Isaac who need us in PR.  We are back again to ask your support of another miracle, another second chance, another opportunity for a little dog with no options and no choices to find a family any doxie would dream of.  Will you help us cover Isaac's care so that we can give that same chance to another little one who is on the streets of Puerto Rico right now?