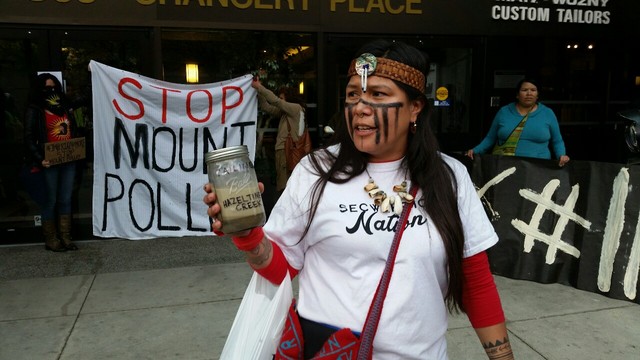 Most recently, some of her most important work has been to stop the reopening of Imperial Metals Mount Polley mine, whose criminal negligence caused “Canada’s worst mining disaster,” that devastated and poisoned her traditional homelands, pristine watershed and her Peoples traditional salmon spawning grounds.

** It is URGENT, at this time, to stop some of the illegal processes happening right now in regards to the province and proposed mining operations: Imperial Metals has been issued a full operations permit and long term discharge permit which Kanahus has been active in opposing, as well as, the Imperial Metals Ruddock Creek Project which is in exploratory stage in her Tribes glaciers and Sacred Headwaters. Kanahus' is working in collobaration with other Indigenous Tribes and Indigenous Resistance Movements in BC also opposing Imperial Metals mining projects and they are calling on a Resistance Gathering marking 2 years since the Mount Polley disaster.

Kanahus' commitment and dedication to Indigenous Land Defence and decolonization has brought her to many Indigenous Nations, making alliances with many Nations, Peoples, organizations and frontline movements. To look at the work she has been doing and her films, you may look at Kanahus' YouTube Channelhttps://www.youtube.com/channel/UC0btAZHZ6R-IdDD0iBHfVXA

In the heart of Kanahus' Tribal Lands and Secwepemc Territory are many more issues that she is working on addressing including, demanding a Public Federal Inquiry into the 1995 Gustafsen Lake Standoff in Secwepemc Territory. Her grandfather Wolverine William Ignace, called for this Inquiry before his passing and Kanahus' stood by his side in exposing the injustice that took place and continues to take place in their unceded Secwepemc Territory. The key, underlying issue is Land, Kanahus' Tribal Lands and the the violation of Secwepemc Human Rights, which has led Kanahus to the forefront in the resistance against the modern-day NStQ Treaty which the provincial and federal government are aggressively pushing in order to secure unceded Tribal Lands by way of extinguishment, surrender and modified-rights. Please check out this video of the direct action taken by the Secwepemc Women Warriors Society against this NStQ Treaty:

Not only is Kanahus a Land Defender, but she is a Freedom Fighter.  Her work also includes the fighting for the Freedom of political prison Orlando Watley, incarcarated in a American prison in California.  She has sparked a movement to #FreeOrlandoWatley in California and continues to advocate for all Indigneous political prisoners in the US.  Free Orlando Watley:  https://www.youtube.com/watch?v=K-S01m6ItFs