No thanks
Take a Stand With Andy: A child's prosthesis fund
✖
Gallery (9) 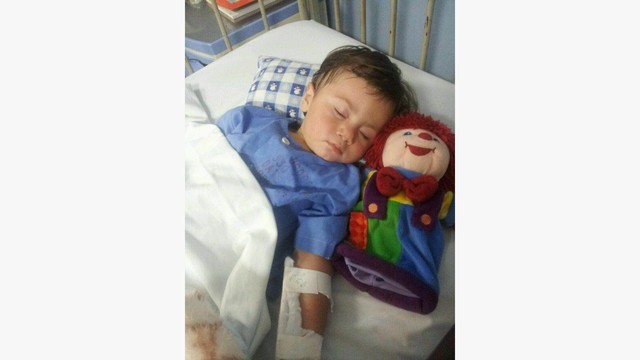 $3,552 raised 34% of $10.5k goal
51 contributors
3 Years running
Contribute
By Molly Hernandez Avellan
Are you friends?
Personal campaign Keep it all
Bridgewater, US

My name is Molly Hernandez Avellan, I am a 26-year-old resident of Hillsborough, NJ and I am blessed to say that I have married into one of the most generous, loving and selfless families on the planet. It is exactly for this reason that I am reaching out to all of you, my friends, relatives, co-workers and generous strangers to help support a member of my family. A 3-year-old boy named Andy.

Andy was born on June 18, 2013 with polysyndactyly, resulting in extreme deformation of his four limbs, and numerous other health complications.

As a three-year-old, Andy has already undergone five, and is now on his sixth surgery: Three in his hands, one in his foot, one in his testicle, one to amputate the first of both feet, with more to come.

Though these are huge strides, the follow-up and treatment plan to address Andy’s severely deformed and clubbed feet has become extremely complex and thus far, surgically unsuccessful to physicians from the National Children’s Hospital of Costa Rica. Andy’s amazing team of doctors has worked with other physicians from The United States, Mexico and Argentina without any success due to the complexity, peculiarity and severity of Andy’s case.

Fortunately, on June 21, 2016, orthopedic surgeons from France arrived to the National Children’s Hospital.  These specialists evaluated and examined Andy’s feet and concluded that the best option is to amputate below his ankles so that Andy would be able to walk in the future with the aid of prosthesis.

Andy was slated to undergo his first amputation in December 2016, however, he was able to be moved up and is had  his first amputation on September 8th, 2016.  This surgical procedure will amputate the right foot. After his recovery, they will proceed to amputate the left foot.  From that point moving forward, Andy will require prosthetic legs. However,  Andy will grow out of the prosthetics every 12 months, requiring a new pair every year until growth has halted.

The cost of the prosthetics is high, but Andy will be able to walk, run, and jump like a normal child. This little boy deserves the chance to live a normal childhood just like other boys his age, not worry if he will ever be able to walk. Please, find it in your hearts to donate whatever you can for Andy. Join us in helping Andy Take a Stand!

See all activity52
NEW Thank you emails can now be sent directly from the Transactions page.
Alternatively you can still leave a comment here.

Molly Hernandez Avellan is managing the funds for this campaign. The campaign is for a personal cause.