The Lohn Foundation will match your contributions!

Double the impact of your donation! We are proud to partner with the Lohn Foundation, which has generously offered to match our donors' contributions to Surrey's Attendance Matters program dollar for dollar. Every dollar donated will be matched by the Lohn Foundation, up to $50,000!
.
Donate now and the breakfast program will receive double your donation, allowing them to feed twice as many children. 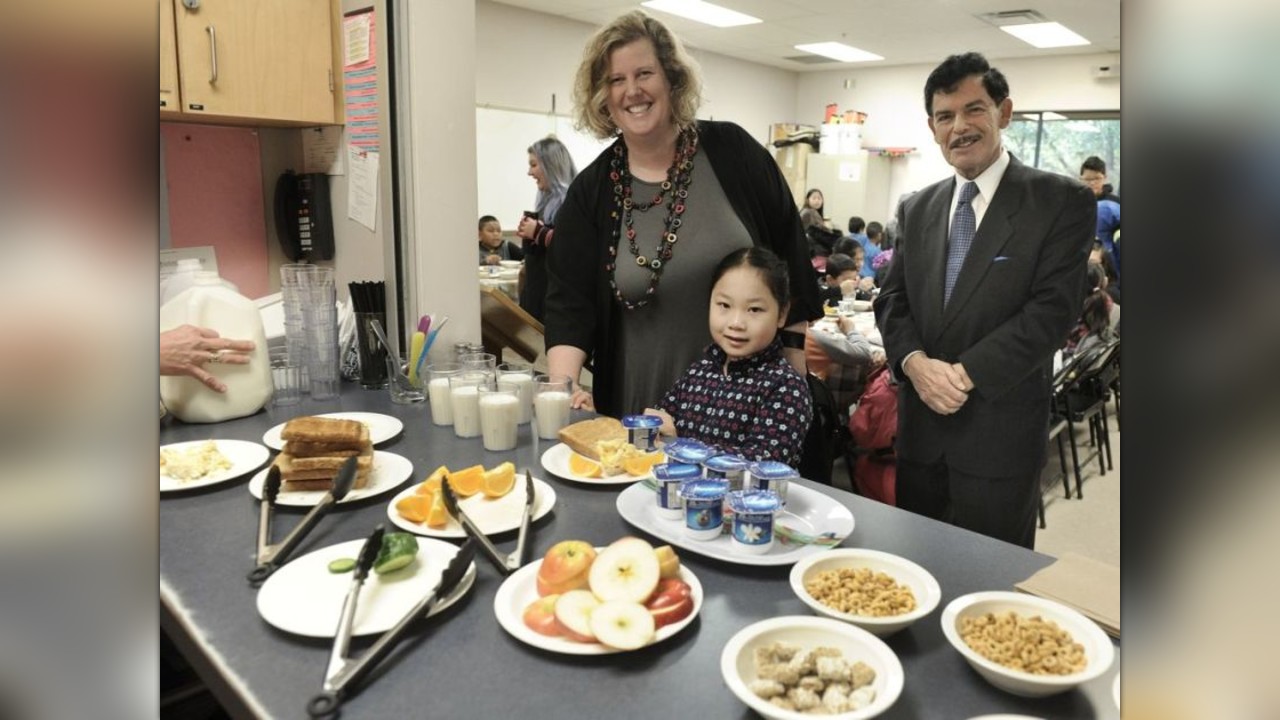 There is a poignancy about Jack Kowarsky's presence among the children being served breakfast in the cramped lunchroom of Surrey's Bridgeview elementary.

In May 1945, when he was the same age as some of the youngest ones now eating scrambled eggs, he miraculously survived the Holocaust.

Of an estimated one million Jewish children living in Poland in 1939, very few survived the war: only 5,000, according to information published by the U.S. Holocaust Memorial Museum.

And here was one of them - a living, historical artifact from one of mankind's darkest chapters - looking on with pleasure as more than 60 children ate, many of whom are immigrants and refugees as he had once been.

Of course, none of the children were aware of his past, or of the fact that the food on the tables in front of them, including cereal, cheese, fruit, vegetables and milk, was provided by this 79-year-old Vancouver lawyer concerned for their welfare.

"When I came to Canada, my family was very poor. We had nothing," said Kowarsky.

It's a description that is not too far from describing the plight of some of these children, whose families are struggling with poverty in one of Surrey's poorest neighbourhoods.

Kowarsky is a trustee with the Lohn Foundation, which has donated more than $30 million to various charities over the years.

He began helping Adopt-A-School in 2015 after reading stories in The Vancouver Sun depicting the state of many children around the province who arrive at school hungry as a result of poverty.

"I know what it's like to be hungry as a child. That's why I wanted to help," he said.

That, of course, is a gross understatement given his experiences in Poland, but since 2015 he has directed $275,000 to Adopt-A-School, all of which has gone to Surrey to provide breakfasts for the school district's Attendance Matters program. This program feeds 937 impoverished children. Adopt-A-School is being asked to provide $100,000 so the program can be available in 23 inner-city schools, one of which is Bridgeview.

Kowarsky, who donated $50,000 this year, was here to see for himself what this means to this school and its 144 children, where 50 per cent of families are living at or below the poverty line.

This year, Surrey is seeking almost $300,000 from The Sun to support 37 inner-city schools where privation is a major issue. The money is used to buy food, bus tickets and to give some schools emergency funds to help families in times of distress.

Principal Diana Ellis gives an example of what constitutes distress.

"We had a child who was suffering from hives and needed Benadryl, but his mother didn't have any money to buy it," she said. "We had to step in."

Her school is seeking $2,000 in emergency funds from Adopt-A-School in addition to money for breakfast.

Bridgeview Elementary, on 128th and 115A Avenue, is not the grandest of areas as it lies up against the industrial estates fronting the Fraser River.

Although it is in a transition, with newer homes being built, it's hard not to notice some of the dilapidated businesses and houses near the school.

But the school is a gem, says Tara Leverington, a mother with two children there.

"This is a very welcoming school.

We have moved out of the area to Cedar Hills, but I love the school so much I drive my kids here," she said.

The Attendance Matters program started the same year as Adopt-A-School (in 2011) and uses food as a means to bring hungry children into school who otherwise might not attend. Studies show children with poor attendance generally don't graduate, with poverty and hunger the major causes.

The program is run by Meredith Verma, Community Schools manager, who told Kowarsky that staff will go out and drive children to the school if they have to.

"Breakfast is a great draw for these kids," she said. "We have families in the district where 80 per cent of their income goes to rent. That's food poverty."

OUR 2019 CAMPAIGN IS CLOSED. PLEASE SEE OUR WEBSITE http://vansunkidsfund.ca  FOR A LINK TO OUR CURRENT CAMPAIGN.

We know that when we start our annual Adopt-a-School campaign this fall, we will continue to hear — and report — stories of the plight of children living in our cities, and our neighbourhoods, many of whom go to school every day without having had a good breakfast, without warm clothing and the basic necessities they require to get the best start in life.

We know, too, that our readers will continue to help us improve their situation, to provide breakfast and lunch and jackets and shoes, to those who need it most.

Since the day our first Adopt-a-School news story was published in the fall of 2011, generous Vancouver Sun readers have helped us raise close to $5 million to improve the lives of B.C.’s neediest school children.

The 2018 campaign alone resulted in a record $923,774 being granted to 129 public schools across the province to feed, clothe and provide for impoverished children and their families.

The money you donate helps teachers and school staff who are dealing with children suffering from the effects of poverty and enables them to provide breakfast or lunch, or food at weekends.  We are grateful for that, and for the opportunity to make a difference.

“The plight of these children and their families is a major social issue. This newspaper’s editorial policy is that government must recognize there are thousands of children coming to school hungry every day and do something to alleviate it,” said Harold Munro, editor in chief of The Vancouver Sun and Province, and chair of The Vancouver Sun Children’s Fund, under which Adopt-a-School operates.

“It should not be left solely in the hands of sympathetic teachers, volunteers and the charity of the public.” (In 2018) our readers responded magnificently. Their generosity has been overwhelming and everyone who helped us with a donation has my deepest gratitude.”