No thanks
HELP SEND KATHY TO SPEAK AT THE 'DEMAND FREE SPEECH' RALLY IN D.C.
SubscribeUnsubscribe
✖
Gallery (2) 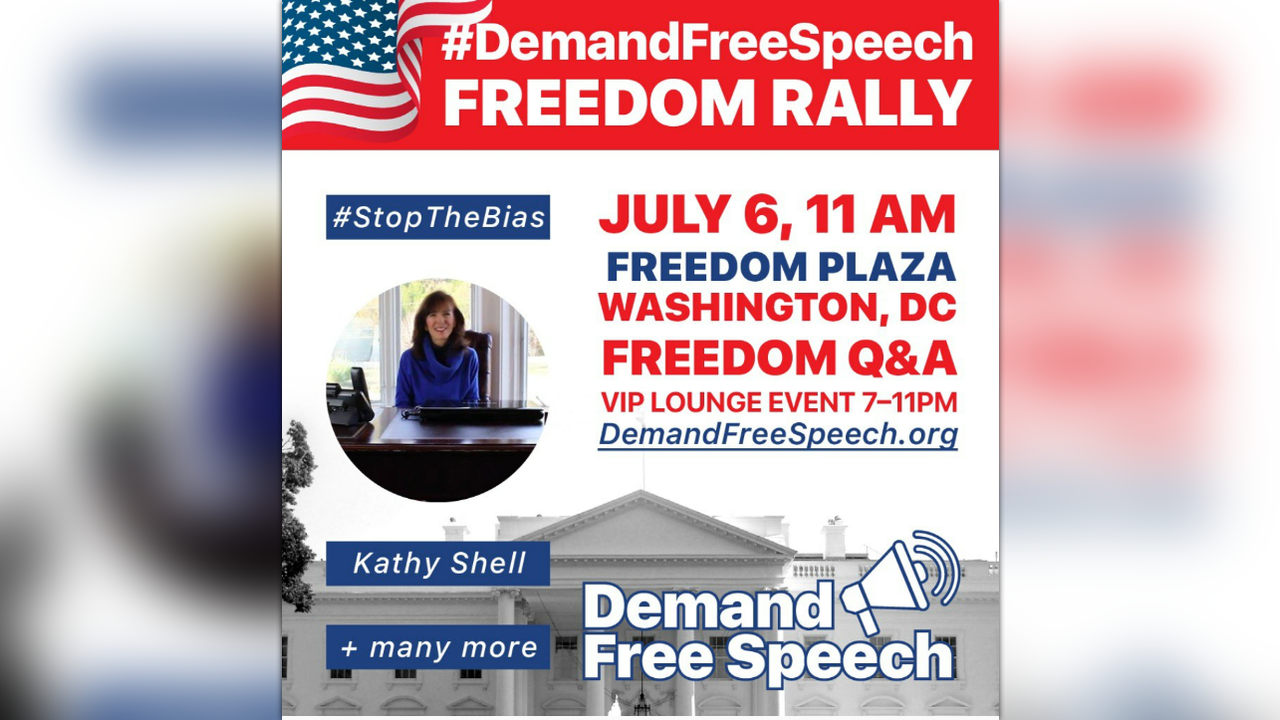 Hi, My name is Kathy Shell-Amidon and I live in the U.S.A. and today, find myself asking for your support, help and donation gifts so I can 'Let My Voice Be Heard' as a speaker at the 'Defend Free Speech Rally' in Washington D.C. July 6, 2019. Event Trip July 4-6

My invitation to speak at the rally in D.C. has been on rather short notice but is EXTREMELY IMPORTANT that I make it to that rally but now realize, the shared room expenses, VIP Event, food etc.. will cost around $800.00 -$1000.00 dollars. I pray like minded friends, patriots, philanthropist and Christians will lend a hand and help me make it to the very important 'Demand Free Speech' Rally.  FREE SPEECH IS A THREAT TO ALL OF US and social media tech giants should NOT be allowed to control what we do or say online just because they disagree.

I was the co-founder of a young, small but very accomplished conservative activist team in 2013-2015. My group strategist/ founder and I were suspended multiple times on and by Twitter to keep us from being able to work as a group.

WHY DID OUR TEAM GET SUSPENDED, CENSORED AND ATTACKED ON AND BY TWITTER IN 2013-2015?

ALL WE DID WAS WORK AS A GRASSROOTS GROUP TO TWEET TO OUR GOP HOUSE REPS asking them to co-sponsor H.Res 36, the bill that created the Benghazi Select Committee and helping the now retired GOP Congressman Frank Wolf, author of the bill get co-sponsors. TWITTER SHUT US DOWN
**Click here to: See our 3 Thank You letters to our team
We continued and was successful but not without a virtual war fight on our hands. We also helped another GOP Rep gain co-sponsor support for his bill, H.Res. 442 and later tried to help a 3rd Rep but by then, Twitter had censored us completely, now known as 'shadowbanning'

FAST FORWARD: My partner, being a Christian on the movie & TV industry decided he could create much needed 3D Christian motion pictures and on a micro budget but neither Twitter or Facebook will allow our promotions, links to the website or crowdfunders to be seen at all; forget getting a large fan base following when your movie project is invisible online. THE BATTLE AND STRUGGLE IS REAL!


NOTE: NINETY PERCENT OF FUNDS RAISED OVER this goal needed for my D.C. rally  trip expenses will go to my group founder/partner & experienced motion picture & TV friend so he can continue creating the very first, live action 3D Christian motion picture (he has several more after the first one) to keep his movie project going.  We have been a team for the past 7 1/2 years and have suffered greatly because of our conservative work. The censorship on social media has slowed things down drastically and costing us both everything, threatening the motion pictures to reach millennial's for Christ.

#1-By helping  me get to the Demand Free Speech Rally
#2- Save the 3D Christian 'Orbiter' movie project
( see orbitermovie.com and roslerstudios.com ) IF YOU  HAVE QUESTIONS OR INTEREST IN INVESTING , PLEASE EMAIL ME VIA THIS CONTACT FORM and I will respond within 24 hours.

I would have never imagined that the 'Land of the Free and the Home of the Brave' , the Country I grew up in, with First Amendment Rights set in stone by the founders of this great Nation would be under attack in the way that it is today.

I have personally been involved in this Free Speech battle since 2013 to current date. It has been the most devastating and costly time of my life because Twitter and Facebook aka the 'Axis of Evil' have made me, my group leader; our new Christian movie projects totally invisible online so we can not function as the left does and costing us everything. IF I HAD BEEN ABLE TO see the cost of our political activism in 2013-2015 and what it would cost us personally, which has been everything, I DOUBT I would have entered into this fight, but I AM in this fight and refuse to back down because NOW they are messing with my our new 3D Christian motion picture project , livelihoods and continue to try to silence us and we have suffered the cost severly and I believe in free speech and not totalitarianism. I passionately believe in what the Constitution of the United States stands for in protecting our Free Speech! NOW, Please help me go to D.C. and make the case. PLEASE HELP GET ME THERE AND GET MY VOICE BACK ON THIS VERY IMPORTANT ISSUE OF FREE SPEECH!

The 'Demand Free Speech' rally in D.C. July the 6th gives me my voice back and hopefully will help change things, bring the seriousness of this issue to President Trump and make MY VOICE COUNT with the others speaking there.

You see; I was one of the first in 2013 - 2015 suspended multiple times, my group founder suspended, censored, shadow banned and attacked by Twitter and then Facebook to stop our Christian , conservative activism and work. We had NO IDEA back then it would STILL be costing us everything TO THIS DAY

I AM ASKING EACH OF YOU, PLEASE HELP ANY DONATION GIFT YOU CAN SO I  CAN CONTINUE WORKING FOR OUR FREE SPEECH RIGHTS AND RAISE AWARENESS TO THE DAMAGES SILICON VALLEY CENSORSHIP COSTS PEOPLE, THEIR LIVELIHOODS, FREE SPEECH AND BUSINESSES.

Kathy Shell-Amidon is managing the funds for this campaign. The campaign is for a personal cause.