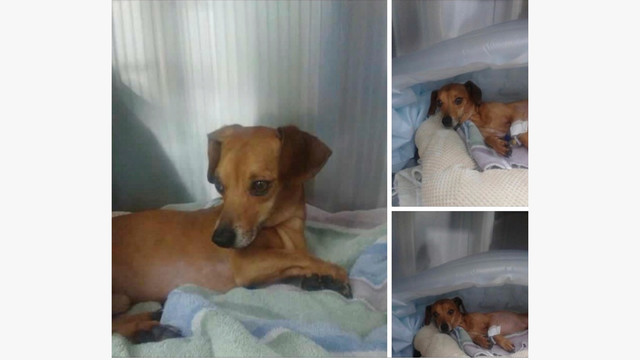 An urgent plea went out across FB to the rescue community in Orlando...."this boy needs a rescue as of yesterday was brought to a clinic after a good Samaritan watched him get hit by a car two times!!!  Need rescue or he is going to the shelter"

As it tends to go with anything having to do with an injured doxie on FB, eventually DRSF became aware of this little boy and agreed to take him if a transport could be organized to get him to us (as Orlando is 3 hours and change from us)

Despite the bad luck of being hit by a car not just once, but twice, this little boy's luck was changing as the community rallying behind him and an angel named Michelle took charge of getting the little boy we have named Zen to us.

Zen made his way south to Ft. Lauderdale and was welcomed by the team at LeadER, who were waiting on his arrival.  He was whisked to the back and got started on a battery of tests as internal and neurological are not always visible.

As of now we know that he is a young male, very thin, only about 10 lbs, with broken ribs, showing signs of taking a pretty good bonk to the head with symptoms of head trauma.  We are waiting on additional test results to have a better idea of what we are working with.

Zen has all the calling cards of being out on the street for a while having to find for himself...skinny, long nails, no tags etc.  It is heartbreaking that being hit by a car TWICE could possibly be the best thing that ever happened to him, but to get him to that place, we need your help!

Will you help us help Zen to get the care that he needs so that he has the chance at the home and family he deserves?  As always, even $1 counts toward the funding finish line and we can't make happy endings without YOU! Zen sends his love and thanks for giving him a chance!!!