Thank you everybody. Our campaign is now over. ✕
Help Gretel Pass in Peace!
✖
Gallery (3) 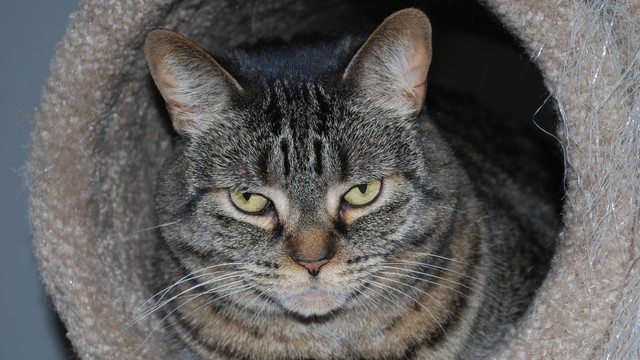 My name is Todd. In 2004, my then-girlfriend Connie and myself adopted a rescue cat. This kitten, 7-weeks old at the time, asked me to rescue her. Out of the four in the kennel, she ran up to the door when I arrived. She jumped up, spread eagle, on the cross-wire door and meowed at me with such a beautiful little voice that she stole my heart right there and then.

We named her Gretel, which is German for 'Pearl', because she was such a precious little bundle of fuzz. A tabby and persian mix, she has the best features of both breeds; Fur so soft you'ld almost think it wasn't there, a little squish-face, but enough nose that the sinus troubles persians can develop never happened. She and I bonded quickly, and I became as much her human as she was my cat.

It was three days ago now that I noticed the fuzzy little light in my life was heaving while breathing. Gretel has traveled with me to Saskatchwan and Ontario as I moved about for work, and it was always a must to sedate her, as she would become so panicked in the car she would soil her box and urinate repeatedly. Depite this, we brought Gretel to the vets as often as we could afford, and this time was no different. We brought her in expecting nothing serious, only to find a horror story.

Gretel has developed cancerous growths in her mammery tissue, and it has likely gotten to her lungs. We spent $800 dollars, all (more really) that we could afford to get the initial diagnosis. Asking about cancer care, the doctor informed us that it likely has gotten to her lungs, hence the shortness of breath, and as of this point we would do no more than extend Gretel's life a short time at considerably more cost than we can afford.

We settled instead on steroid shots to help with her breathing, and an oral pain killer. Gretel was still eating, and had only started to show signs of illness when we brought her in. Her quality of life, Connie and I felt, was still good enough that the final step can still be held off for the time being.

The oral pain killer is costing $87 a week, and with my now-wife Connie unable to work due to disability,we can afford to keep this up for the time being, but saving for the end is going to be impossible.

Our desire is to say our final and sad farewell to Gretel in our home when the time comes. The reason for doing this is to save our darling little love from further suffering. I cannot fathom having to let her go into the universe from the place of horrible fear and panic that she suffers when outside the house.

We have called to local vets, and found the lowest cost option for having a vet come by the house when the time is right. This doctor, Dr. Sweetman, will schedule to come just about any time of the day or night, will undertake Gretel's remains, and will do an individual cremation and place these in an urn for us for the total cost of $463.30 CDN, tax included.

This is the crux of the issue, and the reason why I am appealing for those who can to consider helping Gretel, as well as myself and Connie, bring a peaceful and dignified end to our cherished time together. The pain meds for Gretel to be in comfort for the time being eats about all the spare income I have per week (estimating an average of $100 a week that comes in beyond our expenses.) This makes it impossible for us to save towards covering the final costs for Gretel when the time comes.

Connie and I were formally married after 13 years together just a month ago, and two weeks previous to that our basement suffered a sewage back-up that wasn't covered by insurance. If we had been aware of Gretels situation earlier, we could've made allowances. Sadly, that awareness was not available to us, so we are left with nothing but to appeal for the compassion and support of the broader community. I feel positive that this missive may reach enough ears that support may be garnered to help us in this time of need.

And if not for us, then please consider helping for Gretel! Todd Gervais hasn't posted any updates yet.
Newest | Oldest
Show more
NEW Thank you emails can now be sent directly from the Transactions page.
Alternatively you can still leave a comment here.

Todd Gervais is managing the funds for this campaign. The campaign is for a personal cause.