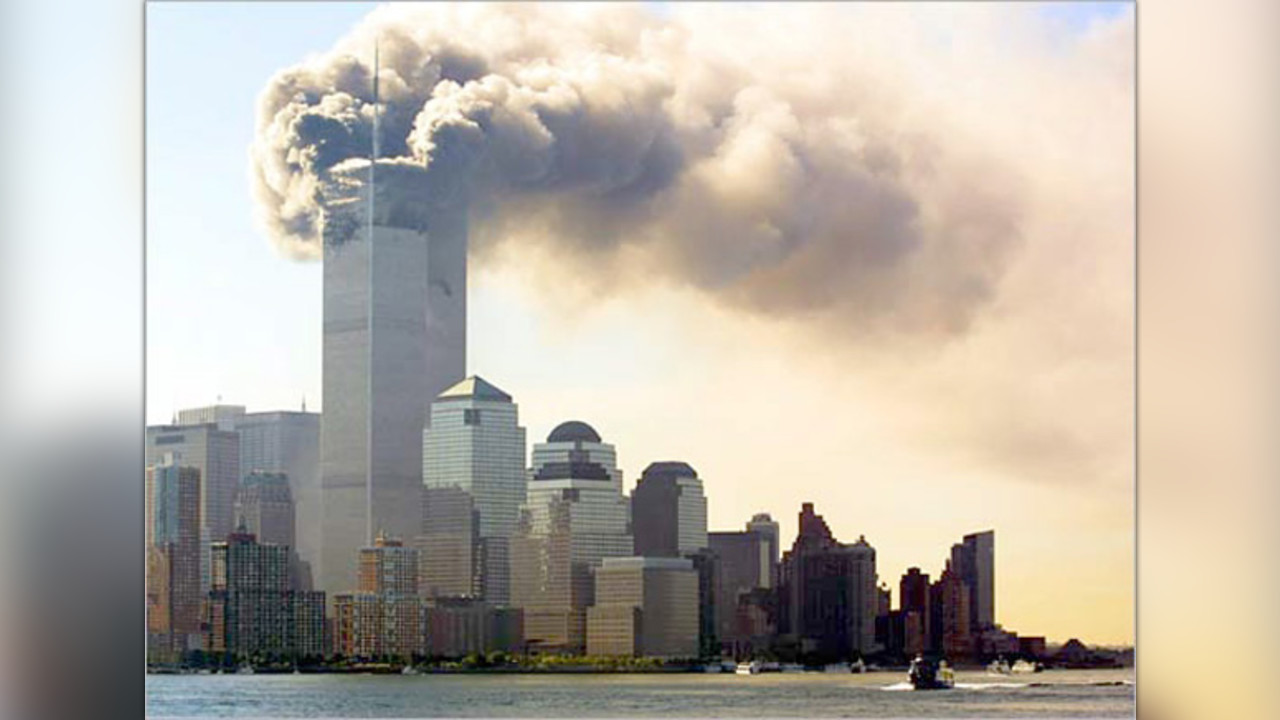 A defector from Iranian intelligence has been sentenced to 17 years in prison by the Republic of Georgia on charges initiated by the government of the Islamic State of Iran, in retaliation for his efforts to expose the Iranian government’s involvement in the September 11, 2001 attacks.

I went to an Appeals Court hearing of his case in Tbilisi on April 11, 2019, at my own expense, because I wanted to see for myself what was happening (I am on the right, below, next to a family attorney and the defector's son in front of the Court). 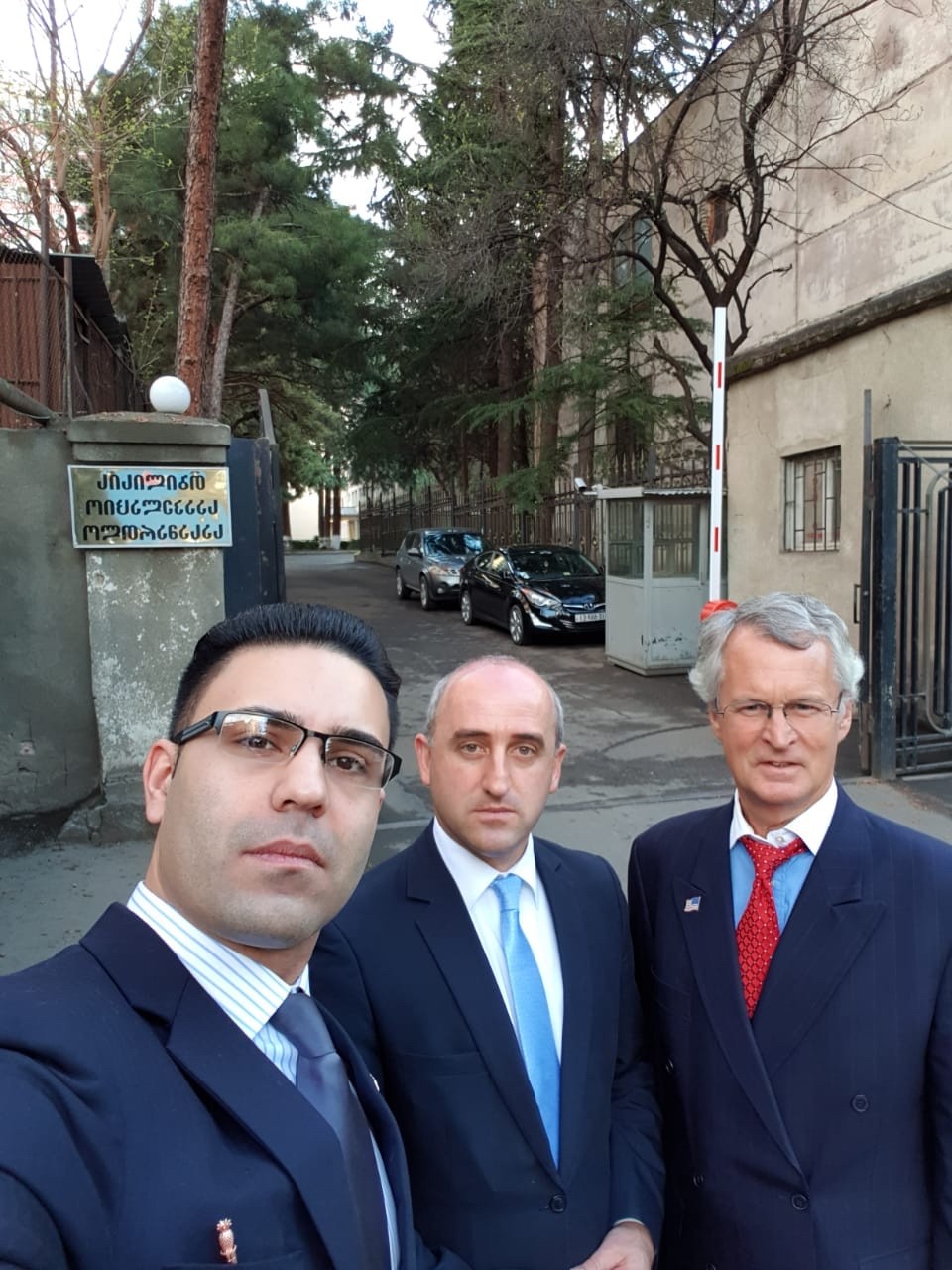 It was a farce.

His court-appointed public defender remained silent for nearly the entire hour, as a bored prosecutor re-read the sentencing report from the lower court. At this, rate, he will spend the rest of his life in a Georgian prison.

The family has identified a top-notch local criminal attorney to present the appeal of this brave man, but desperately needs an initial $7,500 to retain his services.

I have kicked in $2,500 from my own pocket. Won't you join me?
Your contribution of $25, $50, $100 or more will help us fight the unbelievable injustice meted out to a man whose chief crime is telling the truth about Iran's involvement in the 9/11 conspiracy.

I have already provided a memo to the new attorney that details what I see as the many defects in the prosecution case.  But I am not a lawyer.  We desperately need to raise the cash to pay his initial retainer.

Ali Reza Soleimane-pak (aka “Hamid Reza Zakeri”), 55, was arrested on Feb. 9, 2018 in Tbilisi on charges of conspiring to murder an Iranian who had been stalking him on social media.

The Prosecution provided scant evidence of conspiratorial acts, all of which was disputed at trial, and yet claimed that the Georgian and European Union “beyond a reasonable doubt” standard of proof had been met.

After a bench trial (that is, without a jury) that ended on Nov. 5, 2018, the Court found Ali Reza Soleimane-pak guilty the very next day and sentenced him to 17 years in jail.

17 years! That is more than twice as severe as sentences handed down against Georgian defendants on similar charges involving the actual commission of violence, which was not even alleged in this case. (This, according to p3 and p5 of the State Department's Annual Report on Human Rights for Georgia, which you can read here ).

Soleimane-pak showed during the trial - in evidence the Court summarily rejected - that the  chief prosecution witness was, in fact, an operative of Iranian intelligence. (Since then, Soleimane-pak has obtained a copy of that witness's official MOIS identify card and needs competent attorneys to introduce it into evidence).

Please join me by donating $25, $50, $100 or moreto help us retain private criminal attorneys to defend Soleimane-pak.

The true conspiracy in this case was between the Iranian and Georgian governments to frame the Accused.

In fact, the Accused entered into evidence a letter from the Georgian Ministry of Foreign Affairs to the Georgian State Security department, dated Jan. 22, 2018, asking them to launch a criminal investigation of the Accused based on a letter sent to them five days earlier from the Iranian ambassador to Tbilisi.

The letter from the Iranian ambassador, warning of the specific crimes subsequently alleged against Soleimane-pak was dated a full week before the alleged conspiracy began.

How do you like that? And yet, the Court summarily dismissed all defense evidence as lacking credibility.

Soleimane-pak's troubles began when the Iranian ambassador to Tbilisi, Seyed Javad Qavam-Shahidi, visited him at his son's restaurant near Freedom Square in late September 2017.

The ambassador arrived with four embassy goons. Here is a photo taken that very evening in the restaurant, which I have visited. 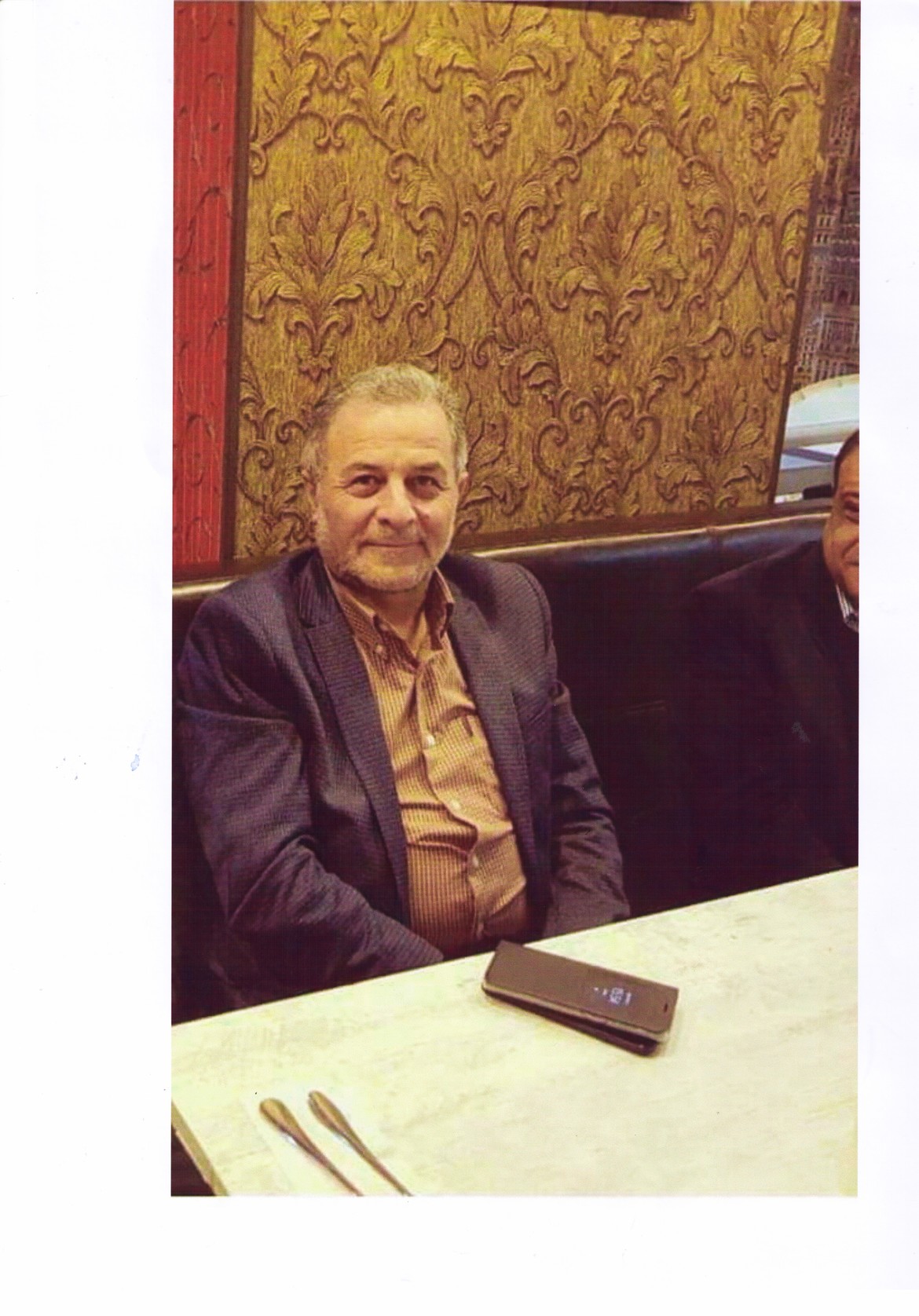 Qavam-Shahidi asked to speak privately with the Accused, and drew him off to the hallway outside the rest rooms, the only area not covered by security cameras.

There he told him that the Iranian regime "Supreme Leader," Ayatollah Khamenei, was willing to forgive him for his role in exposing Iran's involvement in the 9/11 attacks, if he would recant his testimony in the U.S. legal case against Iran and give an TV interview to RT and CNN.

When Soleimane-pak said he had never lied about 9/11 and would never withdraw his testimony, the Ambassador got angry and threatened to retaliate against his brother, who had been arrested by the regime in 2016.

And then, he physically assaulted Soleimane-pak, trying to strangle him, until waiters heard the scuffle and broke them up.

It was the ambassador who then "tipped off" the Georgian authorities that Soleimane-pak was planning to hire a man he had not yet met to murder someone else he did not know.

Friends, this whole story is unbelievable. And yet, the Georgian state prosecutor and the Court swallowed it whole hog.

The Prosecution’s case is so riddled with factual errors, misstatements, and questionable procedural maneuvers, that any reasonable court in any country upholding the rule of law would have tossed it out.

But that didn't happen in the Republic of Georgia, even though the Georgian government constantly professes its goal of joining the European Union and claims to have revised its Criminal Code and Code of Criminal Procedures to bring them in line with EU and international legal standards.

For nine months while awaiting trial, the Accused was held incommunicadoand in solitary confinement in Tbilisi’s Geldani Prison (“Penitentiary Establishment 18”), where he was not allowed phone calls or visits by his family.

What kind of country treats criminal defendants awaiting trial like that? It's a stark reminder of Georgia's Soviet past.

On August 10, 2018, Soleimane-pak went on a hunger strike to protest the Court ruling that  prohibited him from presenting witnesses at trial.  After several weeks, he was transported to a prison hospital and fed intravenously.

On December 7, 2018, he was severely beaten by prison guards and, as a result, ended his hunger strike after 151 days.  Soleimane-pak subsequently filed a complaint against the guards for criminal assault, which remains pending.

When I hear such things, it makes my blood boil.

The Republic of Georgia depends for its very existence on support from the European Union and the United States. And yet, in this case it is behaving as if it were a vassal subservient to the will of the Islamic State of Iran.

Please help me by contributing $25, $50, $100 or more to Soleimane-pak's legal defense. Every dollar you contribute will go directly to his new attorneys in Tbilisi, Georgia.

You might be asking, who am I and why am I so incensed by this case and so dedicated to helping this political prisoner?

You see, I first interviewed Soleimane-pak in 2003 and revealed his explosive eye-witness testimony to Iran's direct, material involvement to al Qaeda before the 9/11 attacks.

Here is the article where it all began, published by the Washington Times' Insight Magazine on June 24, 2003.

And here is Zakeri, holding up the original of the May 14, 2001 letter he described to me during a subsequent meeting in Paris. 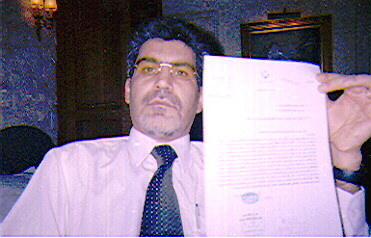 This is the letter that memorialized meetings between top al Qaeda officials in Iran earlier that year, and that tasked Iranian intelligence organizations to support them as they moved forward with the plans to attack the United States on September 11, 2001.

I published a more detailed account of Zakeri's story in my 2005 book, Countdown to Crisis: the Coming Nuclear Showdown with Iran. Later, he provided sworn testimony to lawyers representing families of 9/11 victims in a landmark legal case against the Iranian regime that ultimately led to more than $10 billion in liability judgments against Tehran.

While none of these cases has led to any collection against Iran, the regime is now running scared and for several years has exerted crude pressure on Soleimane-pak and other witnesses in an effort to suborn their testimony.

Ali Reza Soleimane-pak is a witness to the truth. And that is why he is being punished today by the governments of Iran and Georgia.

Please help him with a generous donation today. We need to send money to his new lawyers ASAP so they can mount a successful appeal.

God bless you for your support.

Ken Timmerman is managing the funds for this campaign. The campaign is for a personal cause.